Days may be numbered for the world's oldest bank

Banca Monte dei Paschi di Siena, performed worse than any other bank in a test of its financial health by European regulators, the latest gloomy chapter in a long-running saga of ill-fated deals, financial shenanigans, criminal wrongdoing and even a mysterious death

By Gaia Pianigiani and Jack Ewing 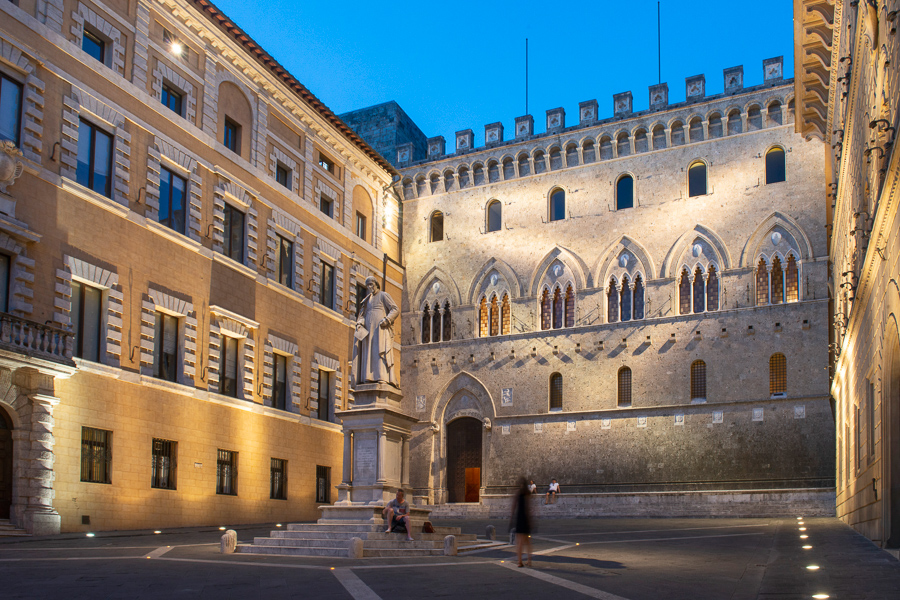 Banca Monte dei Paschi di Siena, the world’s oldest bank, in Siena, Italy, Aug. 12, 2021. Last month the bank performed worse than any other in a test of its financial health by European regulators, the latest gloomy chapter in a long-running saga of ill-fated deals, financial shenanigans, criminal wrongdoing and even a mysterious death; Image: Susan Wright/The New York Times

Last month Banca Monte dei Paschi di Siena, the world’s oldest bank, acquired another distinction: Europe’s weakest lender.The bank performed worse than any other in a test of its financial health by European regulators, the latest gloomy chapter in a long-running saga of ill-fated deals, financial shenanigans, criminal wrongdoing and even a mysterious death.The stress test by regulators, which showed that a severe recession would wipe out the bank’s capital, has forced the Italian government to face an unpleasant truth: Monte dei Paschi’s 5 1/2-century run is coming to an end. With prodding from Rome, UniCredit, one of Italy’s largest banks, said last month that it was in talks to buy Monte dei Paschi on the condition that the government keep all the bad loans.Monte dei Paschi, founded in 1472, will probably live on as a brand name on bank branches in central Italy, and customers probably will not notice much difference, at least at first. But the bank will cease to be a stand-alone entity and a living reminder that Italian merchants during the Renaissance basically invented modern banking. The bank’s operations will be managed from UniCredit’s headquarters in Milan rather than Monte dei Paschi’s fortresslike home office in Siena’s old quarter. The title of oldest bank will probably pass to Berenberg Bank, founded in Hamburg, Germany, in 1590.The bank’s problems are an unwelcome distraction for Mario Draghi, the Italian prime minister and former president of the European Central Bank, as he tries to push through reforms and end Italy’s status as the eurozone’s perpetual economic laggard.Disposing of Monte dei Paschi, which was effectively nationalized after a government bailout, “would free resources, time and political capital for more important issues,” said Lorenzo Codogno, a former chief economist at the Italian treasury who is now an independent consultant. “There is strong political pressure to find a solution as soon as possible.”But for Siena and the surrounding area, the troubles of Monte dei Paschi are a psychological as well as an economic blow. Few banks are as enmeshed with the wealth and identity of their communities as Monte dei Paschi was in its heyday. It remains Siena’s largest private employer, and the foundation that owned it bestowed bank profits on a wide variety of civic activities, including kindergartens, ambulance services and even costumes that rival clans wore in the processions preceding the Palio, the bareback horse race normally run twice each summer in Siena’s central plaza.“Monte dei Paschi is part of the city’s flesh and blood,” said Maurizio Bianchini, a local journalist, historian of the Palio and former head of communications at Monte dei Paschi. “From a human point of view, it’s as if the bank was a branch of every Sienese family.”

Monte dei Paschi’s survival has been in doubt for years. Its troubles began in 2008 after it paid more than it could afford to acquire a rival and become Italy’s third-largest bank, after Intesa Sanpaolo and UniCredit.In 2013, as police investigated allegations that bank executives hid mounting losses from regulators and shareholders, David Rossi, Monte dei Paschi’s head of communications, was found dead in an alley below his office window in an apparent suicide. Members of Rossi’s family were convinced he was killed for knowing too much, but police never found conclusive evidence of foul play.In 2019, more than a dozen executives of Monte dei Paschi, Deutsche Bank and Nomura were convicted of illegally using complex derivatives to cover up the Italian bank’s problems. They have appealed.Most banks with Monte dei Paschi’s problems would have been sold long ago, but for the people of Siena the proposed deal with UniCredit would be like auctioning off part of their identity. The city will also suffer economic pain. The sale to UniCredit is likely to lead to as many as 5,000 job cuts, a third of the total jobs, according to Italian news reports. UniCredit declined to comment on what layoffs might be in store.“The city is infuriated,” an 80-year-old man, who declined to give his name, said as he chatted with friends on the steps of a Monte dei Paschi branch in central Siena. Giving up control to UniCredit in Milan, he said, “would be like losing a daughter.”Bank stress tests published in July by the European Central Bank exposed how vulnerable Monte dei Paschi remains despite multiple recapitalizations and turnaround plans. In the event of a severe recession lasting until 2023, the bank’s capital would be reduced almost to zero, according to the stress test. The bank would need “well above” 2.5 billion euros, or $2.9 billion, in fresh capital, Daniele Franco, the Italian economics minister, told Parliament this month.UniCredit disclosed on July 29 that it was in exclusive talks to buy Monte dei Paschi, a day before regulators published the stress tests. Andrea Orcel, the chief executive of UniCredit, told reporters and analysts on July 30 that the bank needed to thoroughly review Monte dei Paschi’s books before making a decision on whether to go through with the deal.But he said Monte dei Paschi would strengthen UniCredit’s business in central Italy.“The timing is right,” Orcel said.Still, many people in Siena refuse to accept that Monte dei Paschi’s half a millennium of independence may soon be over. The potential sale to UniCredit has become an issue in city and parliamentary elections, which will be held in October, and may play into the hands of the League, a right-wing populist party that already supports the mayor of Siena, Luigi De Mossi.De Mossi told reporters recently that the bank was “not a supermarket,” where UniCredit could pick only the assets it wants and leave the government to deal with the rest. The bank’s future, he said, is a “social and political issue that concerns not only Siena, not only Italy, but Europe.”But other leaders say it is time for Siena to move on.“The ECB stress tests are a sort of final check of the fact that the bank is not able to stand alone any more,” said Enrico Letta, a former prime minister of Italy who, after a stint in academia, has returned to politics as a candidate for Parliament representing the provinces of Siena and Arezzo.Letta argues that, while banking will still be a major employer, the city should invest in its other traditional strength, health care. The British drugmaker GlaxoSmithKline has a major research center in Siena that develops vaccines for diseases prevalent in poorer countries, like typhoid.“Siena wanted to be the capital of finance,” Letta said. “Siena can be the capital of life sciences.”Letta has called for the creation of a European district for life sciences in the city, and said part of Italy’s share of the European Union pandemic recovery funds should be used to support research coordinated by Toscana Life Sciences, a nonprofit organization in Siena that helps health care startups get on their feet. One of the organization’s research labs is developing an advanced monoclonal antibody treatment for the coronavirus that, if successful, would be less expensive than similar treatments and could be administered by doctors without hospitalizing a patient.“We have to give Siena a new mission,” Letta said.Some Siena residents agree. Like Italy itself, Monte dei Paschi has shown that an illustrious history is no guarantee of success in the modern world.“It was the prosperity of Siena,” Marco Bruttini, 70, a retired graphic designer, said while sitting on a bench next to the bank’s headquarters on a recent morning.“But even without this merger,” Bruttini said, “that time is long gone.”

Tweets by @forbesindia
The Taliban's leaders: Worldly and 'inclusive' or ruthless ideologues?
Sanjeev Bikhchandani: From pioneer to messiah of India's internet startups