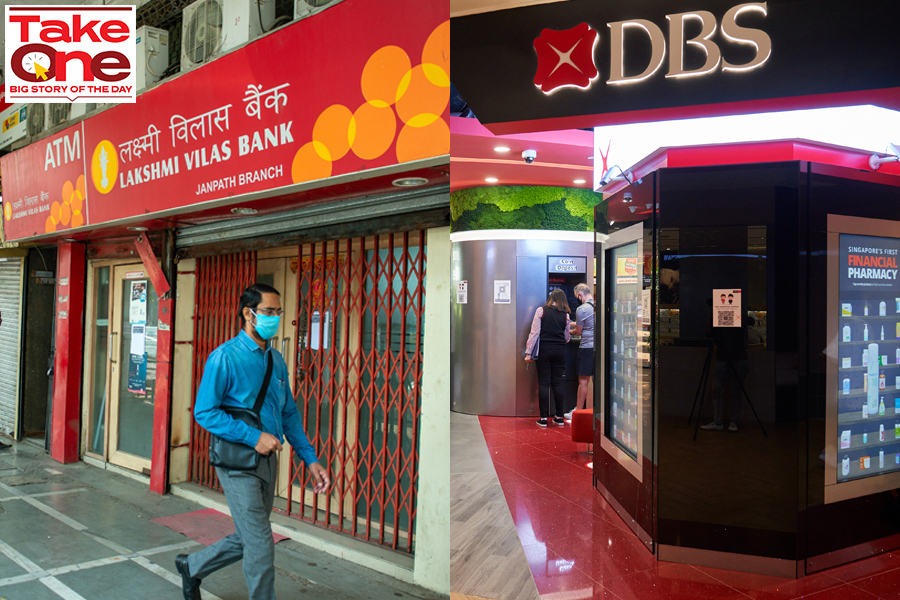 The contours of the new DBS Bank India—into which failed private sector Lakshmi Vilas Bank (LVB) was amalgamated into eight months ago—are being put into shape. DBS Bank India, the wholly owned subsidiary of Singapore’s largest lender DBS, is strengthening its retail lending to acquire new customers by leveraging on LVB’s original strengths, banking with small businesses and retail consumers.
In coming months, the revised loan book of DBS Bank India will look like this: Corporate lending, once nearly 75 percent, will come down to around 55 percent, while lending to small- and medium enterprises (SMEs) would be just below 25 percent. The balance will constitute consumer banking (gold loans, mortgages, consumer loan against property and unsecured personal loans).
DBS Bank, which pre-merger offered SME banking to its clients in 25 cities, will now expand this to 100 cities nationwide, on LVB’s network in the next four months. “The plan is to further expand this to a total of 200 towns and cities,” says Surojit Shome, DBS Bank India’s managing director and CEO. In consumer banking, DBS—which already offered mortgage loans on its own –is now restarting LVB’s secured small business lending business through LVB’s branches. This would constitute lending to individuals, proprietorship and partnership firms against self-occupied or commercial property.
DBS Bank has already revitalised the gold loan business of LVB and this will remain one of the growth areas for the bank.
By the end of 2021, DBS Bank India plans to launch a co-branded credit card along with non-banking financial company (NBFC) giant Bajaj Finance. After that, the bank also plans to launch its own proprietary credit card to service its overall 3.2 million customers (see table). DBIL already has a debit card presence through its digital Digibank platform.

“We plan to grow across a wide spectrum of products—in both liabilities and assets—through consumer and SME banking. The exact mix will be specific to each product line and the target market,” Shome adds. All of this will propel DBS Bank India into a new space, where it could start to compete with some of India’s large private sector retail banks in coming years.
“The best of private sector banks might actually start to feel the heat. With the benefit of capital, DBS can polish up the [LVB] franchise and get going,” says Parthasarathi Mukherjee, who was LVB’s former managing director and CEO between 2016 and 2019.
Growing larger, carrying more NPAs
Shome shared some of the bank’s first financial earnings data post the LVB merger. DBS Bank India (DBIL) reported a massive jump in both topline and bottomline growth, but it also inherited the non-performing assets of LVB’s books, with gross NPAs surging to 12.93 percent from 2.6 percent earlier (see table). Shome admits that LVB’s SME portfolio “will be under stress in this year” but being fully provisioned for already he is not worried, as this is the business the bank plans to grow in coming years. DBIL has now created separate teams to tackle the NPAs in the mid and large corporates, SMEs and consumer banking segments of LVB. These would get resolved over the next 12-18 months, he said. 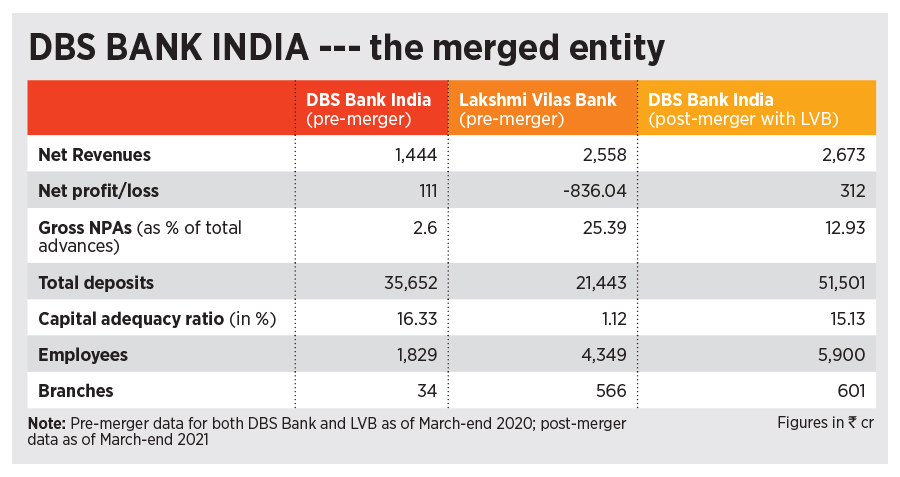 The bank is currently involved in 3-4 large processes of integrating the banks. This involves assessment of the existing near 3,700 LVB staff, whereby grades of staff of both the banks—and which would be vastly different—are being matched.
This integration—which will overlap with the optimisation of the branch networks—will be completed over the next 12 to 18 months, Shome said. The LVB staff is also being made Covid-19 ready, through vaccinations, and now 75 percent of its non-branch staff is working from home, compared to zero pre-merger. The challenge was to get the LVB network of people to be able to work remotely, a concept alien to this traditional 94-year-old bank. DBS got about 400 laptops transferred from their innovation hub in Hyderabad—often by driving to remote parts of India—to reach it to people’s residences. The bank, which is well capitalised, is now creating contingency plans for a third pandemic wave, assuming “multiple waves” might be seen in coming months.
DBS does not offer guidance but Shome said “business momentum has continued to be strong” in the April to June quarter. “Starting January this year, we are ahead of our plans, within our expense budget and incremental provision,” he said. In 2021, the bank grew 5 percent in total deposits, including about 10 percent in the current and savings accounts (CASA) deposits. Shome has also understood the need to protect the interests of LVB’s core “sticky” retiree customers.
The bank will be hiring marketing/sales force to LVB which it had lost earlier. “That will help us monetise; what is the use of a branch if you cannot add more business to it?” he says.
In November last year, the Reserve Bank of India and the government, in just about nine days, developed the framework to protect the interests of LVB’s depositors and ensure financial and banking stability. The moratorium was imposed by the RBI on November 17 and lifted on November 27, and all of LVB’s 562 branches started to function as DBS Bank India branches. DBS has 39 branches in India.
The new owner is unlikely to downsize LVB’s traditional branches in various parts of south India in a hurry. “There will be optimisation of the branches, where some branches could be moved to another location within the city/town or some branches to another city. Not all of LVB’s branches are profitable, which could be due to wrong locations but right market, not having the right staff and products, or not enough resources to monetise the business,” he said.
DBS strategy: Beyond digital
The optimisation of bank branches will work alongside with the integration of the connectivity and operational platforms of both the banks. By September-end next year, the technology and core banking system of both the banks will be completed, with LVB’s business, currently on Oracle’s Flexcube, to be merged with DBS’s new Infosys Finacle platform.
DBIL’s recent acquisition of LVB and a stake in privately owned Shenzen Rural Commercial Bank (SZRCB) indicates a shift in the bank’s thinking that started a few years ago. “This was that it will not be easy to grow a digital-only strategy into profitability,” DBS Group CEO Piyush Gupta told analysts in April at their earnings call in Singapore. DBS will need the proper mix of digital and physical branch presence.
“During the pandemic, we found that people were quick to transact digitally but the movement of balances into accounts is slower so we decided to pivot further to build [a branch] network,” Shome added. The logic here is that large or mid-sized corporates are not too concerned about how many branches a bank has in each city but it is important in SME or consumer banking, where they need to see the nearest branch as they move their savings. The merged DBIL-LVB bank now has 3.2 million customers. 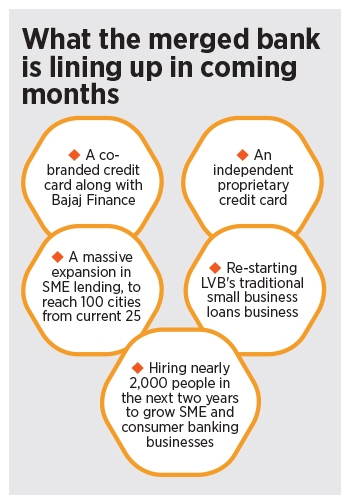 DBS had outlined their expansion plans for India in 2017, two years after being the first foreign bank to apply to the RBI for the wholly-owned-subsidiary (WOS) model—compared to expansion by branches, which foreign banks traditionally did in India. SBM Bank Mauritius was the first foreign bank to operate as a WOS in India, followed by DBIL. The bank had continued to grow in India through branches and kiosks since then but the inorganic growth through LVB’s merger has catapulted its reach.
Of the LVB’s 562 branches, about 130 are regulatory in rural Tier 5 or 6 towns, which will also need to be studied for efficiency. “Overall about 15 to 20 percent of the branches will need further optimisation,” Shome said. The bank plans to hire a further 1,000 to 2,000 people in next two years to boost the growth business of SME and consumer banking. Around 183 people exited LVB during the merger.
Controlling expenses will be critical to DBS’s profitability in coming months. LVB’s expenses for four and a half months in FY21 were Rs 280 crore and that will be the cost base as there will be no optimisation in the current year. Most of the expenses are towards connectivity, staff and technological upgrades. Shome says the focus will be to grow business rather than constantly trying to lower costs.
The macro-economic data coming out is still not favouring India. India’s retail inflation measured through the Consumer Price Index is at 6.26 percent for June 2021, the second successive month where inflation was above the six percent mark. India is running the risk of being close to stagflation, with economic growth stagnating—it grew just 1.6 percent in March 2021—coupled with rising unemployment (ranging between 9-11 percent in May-June) and high inflation. Most economists, financial institutions and credit rating agencies have all pared their FY22 growth forecasts for India to between 9-11 percent from an earlier optimistic 12-13 percent.
“We see stress possible in the SME and consumer segments, with delayed capital formation. The next six to twelve months will be turbulent and we have to be cautious,” Shome says. DBIL will spend this time judicially by integrating the network and technology of the two banks. “We can grow when the market grows or when we deliver better value for the customer,” Shome says. The bank is well placed for either possibility.
With few of the foreign banks—barring Standard Chartered Bank—being active in retail banking in India, “there is room for DBS to grow and strengthen their foothold. Critical will be how its loan book grows,” says Kranthi Bathini, chief market strategist at WealthMills Securities.
Mukherjee said the new merged entity has got the right mix with DBS’s digital focus and presence in the metros and LVB’s traditional banking strength in semi-urban and rural India. “The biggest challenge today for DBS is new client acquisition.” While this might be slow at the moment, DBIL has got the strategy in place with its expansion into credit cards and strengthening its SME and consumer banking business. This then marks not just a forceful chapter for DBS in India but also a re-start for the community-focussed LVB which serviced small-businesses.

Tweets by @forbes_india
India's tryst with Intermediary liability from 2000 to 2021: Changing paradigms in the social media age
The dark side of Chess: Payoffs, points and 12-year-old grandmasters