While the amalgamation seems like the best possible option for the cash-strapped bank, hurdles such as integrating technological platforms, limited cross-selling opportunities of products and cultural differences will have to be overcome 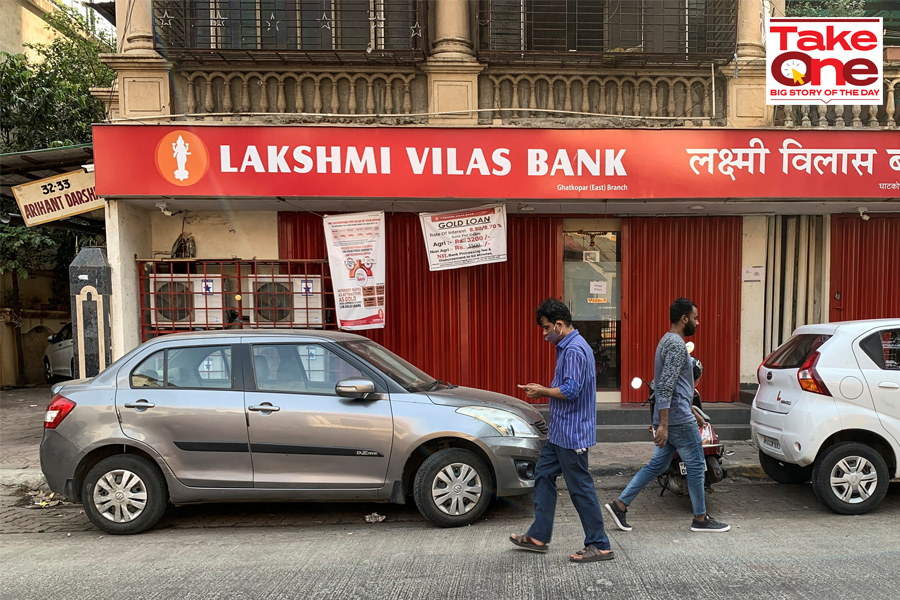 The Reserve Bank of India (RBI) has assisted the cash-strapped Lakshmi Vilas Bank (LVB) take its first tiny step to survival. The central bank has found a suitor and formulated an amalgamation plan with private lender DBS Bank India (DBIL)—the wholly-owned subsidiary of Singapore-based DBS Bank.  The road to the merger, though, is rocky and a tricky one, laden with hurdles, including integrating technological platforms, limited cross-selling opportunities of bank products, cultural differences and employee compensation issues, which the two banks have to deal with in coming months.

Investors, too, have signalled their concerns: The LVB stock is down by 36 percent to Rs9.95 at the BSE since the moratorium and a thrust-down amalgamation was announced by the RBI. The deadline to submit suggestions and objections to the amalgamation plan ends on Friday, November 20, following which the RBI will take a final call on the matter. LVB is now under moratorium and its new administrator, TN Manoharan, appointed by the RBI, is focussed on ensuring the availability of cash through all banking channels for its customers, who appear keen to withdraw cash from the troubled bank. Deposits for LVB have fallen to Rs20,050 crore as of November 18 from Rs20,973 crore in the September-ended quarter. “An amount of Rs10 crore has been withdrawn since the moratorium was imposed,” Manoharan told the media in a conference call on Wednesday. The shape a new LVB might take  One of the biggest concerns for the digital-focussed DBS will be to decide on the balance it wants to maintain towards physical banking—the way in which LVB largely banks with its customers. DBS currently operates 35 branches in 27 cities while LVB has 563 branches, which will be acquired by DBS in one go. “LVB’s working is like a public sector undertaking (PSU) while DBS has a modern global digital working style. There are cultural mismatches and compensation benchmarks which will have to be worked towards,” says a financial head with a global consultancy firm, on condition of anonymity. While it is early to determine the number of branches which will be merged, it is quite likely that the new LVB branches could operate like a business correspondent model where sourcing of deposits and loan offerings are made. “There may not be the full fleet of products and they could have the same personnel in these local branches,” he adds. The pressure of making this merger work lies, in some ways, more on DBS than on the RBI. DBS India, which has a stronger corporate focus, is keen to expand its retail presence—something it has been slow in doing—and will be able to do through LVB. LVB, in turn, gets the much-needed financial assistance: Its capital adequacy CET 1 ratio is -4.85 percent, well below the mandated levels. DBS focuses largely on corporate and institutional banking, alongside lending to small-businesses and its pure digital banking operations through digibank. Net advances for DBS grew by six percent to Rs19,131 crore in FY20 from Rs18,108 crore as of FY19, according to the Registrar of Companies. “The portfolios of both banks show that at this stage, the ability to cross-sell products is going to be limited. Hence the merger of branches will have to be thought out extremely carefully,” the consultant explains. LVB offers DBS the advantage of “sticky liabilities” where—being a community-focussed bank—customers, and deposits, do not move out quickly to competition. If DBS manages to retain the small manager at a local branch at LVB, and as long as there is no massive chop and change in the LVB staff, it will prove to be advantageous. LVB’s Manoharan has assured his employees that “employee interests will be taken care of”. 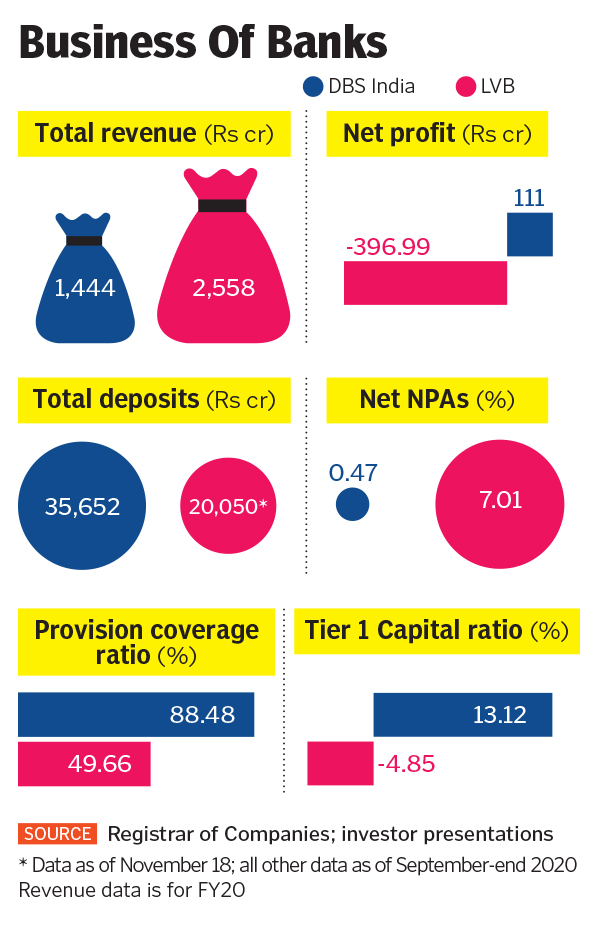 Reason For Moratorium A question that is not adequately answered is why was LVB placed under a moratorium when it was not facing a run on deposits? The RBI had placed Yes Bank under moratorium earlier this year, but that was because depositors were withdrawing monies. Moratoriums, when imposed—however short—are never of advantage to the institution on which they are imposed. The Punjab and Maharashtra Co-operative Bank is still reeling from the moratorium that has been extended to December 22. “The real reason for the LVB moratorium is to give a window… some time for DBS to value all the assets clearly and understand the slippages which have increased recently. DBS needs a balance sheet at a fair value and needs to understand how much of the book still needs cleaning up,” says a private bank chief executive, declining to be named.  LVB has gross non-performing assets of Rs4,063 crore, or 24.45 percent of total advances—amongst the highest in private sector banks. Its total provisions for bad loans has soared by nearly 250 percent to Rs391.3 crore in September from Rs112 crore in the June-ended quarter. Another factor weighing in on the regulators’ mind was the fact that the bank was headless, after its shareholders decided, publicly, to vote against the appointment of seven board members in September. “Corporate governance on a daily basis could have become a real concern and you don’t want a scenario where the bank is losing control over the situation and too much money is going out of the bank in the absence of a moratorium,” the banker says. The RBI did not have too many options before it, apart from opting for DBS. It is anybody’s guess how many suitors would have come forward if they knew they were getting an opportunity to acquire a bank, completely clean. The regulator could have offered LVB to be taken over by a public sector bank, but “this would mean straddling a PSU bank with a weaker one”, the CEO says. Punjab National Bank was named as one of the possible suitors to bail out LVB, prior to DBS. Investors lose out The RBI’s proposed amalgamation states that LVB’s paid up capital will be written off. “This means that the value of the equity capital will be zero,” explains the consultant. So the bank’s equity, including the shareholding of the promoter group (6.8 percent), Indiabulls Housing Finance (4.99 percent), Srei Infrastructure Finance (3.34 percent) and Capri Global (3.82 percent), will be extinguished. “Unlike in Yes Bank’s case, where there were more retail investors who lost sums, in LVB’s case, the institutional investors will lose out. But in most such cases, the priority will be to protect the rights of depositors. If institutional investors lose money, so be it… they take the risk of being shareholders,” the consultant says. Some investors are likely to move court in coming days, according to reports. Much of the sentiment of the regulator and LVB itself was summarised by what administrator Manoharan promised publicly. “Not one rupee [of depositors] will be at risk. Customers have nothing to worry about. There is light at the end of the tunnel.”