Yes Bank has managed to tide over the moratorium to find credible investors. The lockdown is the latest challenge for the troubled lender, but new CEO Prashant Kumar is confident of sailing through with a digital focus 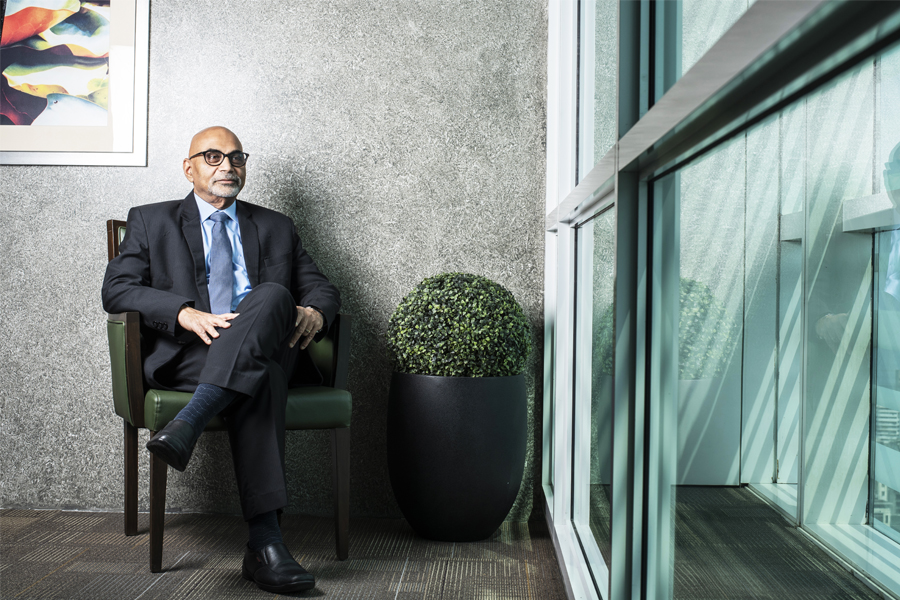 To boost growth, Yes Bank’s newly appointed CEO Prashant Kumar wants to focus more on retail deposits on the liability side
Hours after the Reserve Bank of India (RBI) lifted the moratorium on Yes Bank on March 19, the troubled lender’s newly appointed managing director and CEO Prashant Kumar decided to personally address customer concerns at the bank’s branches. What he saw at the Marine Drive branch in South Mumbai pleased him. “I was anxious that there would be a lot of customers. But there was no rush… I saw normal business and a few customers. It was comforting to learn that they were comfortable in dealing with the bank; there were no concerns and they had kept their deposits,” he tells Forbes India.

The interaction is hardly a metric to assess the bank’s health, but its newly structured board and Kumar will be breathing easy. After all, the moratorium was lifted two weeks ahead of its scheduled date of April 3 once a restructuring plan was approved. Banking operations have resumed as usual for its corporate and retail customers, and across its digital channels. Investor and depositor fears have been assuaged with the infusion of ₹10,000 crore additional capital into the bank, after a reconstruction plan was devised by the RBI and the government. Yes Bank’s common equity Tier1 (CET1), a key matrix, stands at 7.6 percent, against a worrisome 0.6 percent in December 2019.

During the lockdown on account of coronavirus, about 95 percent of Yes Bank’s 1,135 branches are operational and about 80 percent of its staff is working from home. Kumar and about 5,000 employees attend office.

With funding and the moratorium concerns behind it, the Yes Bank stock now moves in a narrow band, trading at ₹24.15 at the NSE—albeit after it was removed from the index Nifty 50 and banking index Nifty Bank from March 19.

Going retail…
For the reconstruction of a new bank, the RBI superseded the previous board and nominated R Gandhi and Ananth Narayan Gopalakrishnan to join Kumar. The SBI nominated Swaminathan Janakiraman and Partha Pratim Sengupta to the bank’s board. Sunil Mehta, former non-executive chairman of Punjab National Bank, is non-executive chairman while Mahesh Krishnamurthy and Atul Bheda are non-executive directors.

However, to create a new financial entity, Kumar will need to do everything different from what its founder-promoter Rana Kapoor did during the bank’s glory days. Between 2008 and 2015, Yes Bank expanded rapidly nationwide and lent indiscriminately and aggressively to all, including shadow-lenders and real estate developers. This led to a weakening in asset quality, which became a solvency issue because its capital buffers were diminished due to persistent high growth, including in the most recent years. It was akin speeding without seat belts.

In 2016 and 2017, the bank reported divergences in its gross non-performing assets (NPAs), which led to falsely inflated profitability. The board did not take action against Kapoor, the bank’s auditors or the senior management. As loans and credit flow worsened in the banking system, Yes Bank saw a sharp 39 percent erosion in deposits in nearly 12 months: From ₹227,601 crore in March 2019 to ₹137,506 crore as of March 5, 2020.

“Our experience shows that it is not sustainable for a bank to be over-dependent on large-ticket lending on the asset side or bulk deposits on the liability side,” says Kumar. “Wherever there is an adverse economic cycle [as is now], the balance sheet of a bank will be challenged. We need to move to a granular portfolio—both on the assets and the liability side—to ensure long-term stability for the bank.”

“Our short-to-medium-term strategy will be to focus on the asset side by lending to retail and the micro and small business enterprises, so that the risk is well spread,” adds Kumar. About 43 percent of Yes Bank’s loan book is towards retail and MSMEs, as of December 2019.

On the liability side, Yes Bank will try to focus more on bulk deposits from retail. Currently, retail term deposits constitute 31 percent of its term deposits. “It is a long drawn battle… it will not change overnight,” explains Kumar.

…at the worst possible time
Yes Bank is still miles behind as it seeks to go retail. Large banks such as HDFC Bank and Kotak Mahindra Bank have grown in size with retail as their growth engine, as have mid-sized peers such as IndusInd and RBL. With balance sheets and income affected due to rising bad loans from corporate lending in previous years, retail had to be the way forward (see chart). Kumar and his team are trying to turn around the bank at a challenging time.

India is grappling with the coronavirus outbreak. And the standstill in economic activity means that growth for the first quarter of FY21 has been written off; activity may only be for nine months or less, depending on how long the lockdown persists.

The RBI has allowed all banks to offer customers a three-month moratorium. So, borrowers can skip their monthly instalment payments on home, personal, auto, education and working capital loans and credit card dues. Kumar says about 15 percent of Yes Bank customers have opted for the loan moratorium and about 4 percent toward credit card dues. However, banks are without their normal cash flows because of this. “The incentive to lend is also reduced,” says Saswata Guha, director and team head, Fitch Ratings in India, which does not rate Yes Bank, but monitors its developments. “Loan growth will be the biggest casualty [for banks]. Other than working capital, we expect the incremental demand for new loans to be quite low.”

Already, non-banking financial company Bajaj Finance says it saw a 22 percent drop in new loans sequentially, in the March-ended quarter, to 60 lakh and lost a million accounts due to the lockdown.

Yuvraj Choudhary, an analyst at Anand Rathi Securities, expects banks’ credit growth to slow down and asset quality to deteriorate further. “Loan growth for several banks will be in low single digits in FY21,” says Choudhary. Total bank credit growth in India is at a 50-year low of 6.14 percent, according to RBI.

Both Choudhary and Fitch’s Guha fear an increase in retail NPAs with the lockdown extended to May 3. Unsecured personal loans, two-wheeler financing, SME and loan against property are all likely to witness asset quality stress in FY21.

“I expect a spike in unsecured retail loans such as personal loans and credit cards. But at some point, there will be a collective impact on the retail portfolio with rising unemployment and/or salary cuts,” says Guha. Yes Bank already has gross NPAs of 18.87 percent as of December 2019. Kumar’s retail strategy will be to leverage the bank’s strong digital platform. “We have a lot of deposits which flow through our system, including remittances or NEFT, RTGS transactions,” says Kumar, adding they will be used to tap new customers. 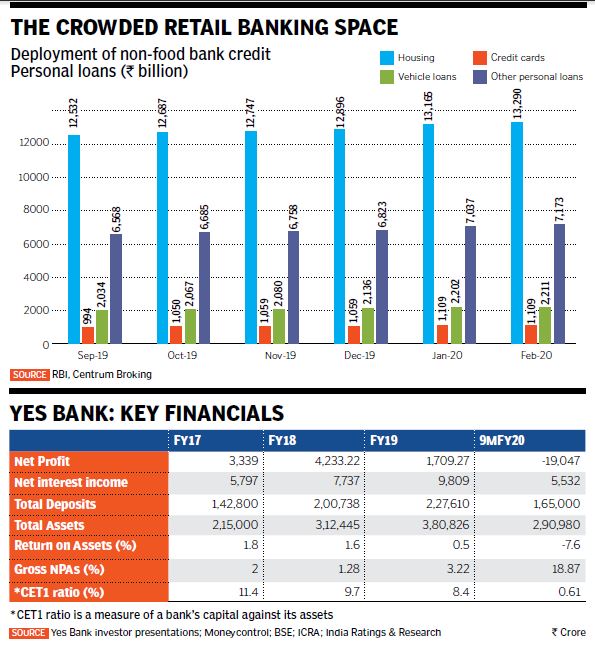 Toughest Phase
Yes Bank also has the approval to raise an additional ₹15,000 crore. Of this, the shareholders have approved the raising of ₹10,000 crore. If the remaining amount is raised through rights issue, shareholder approval is not required, says Kumar. This is likely to happen in the April-June quarter, either through a rights offering or a foreign convertible bond issue.

Kumar, however, admits that the bank’s toughest phase is “not over”.

“Covid-19 has created fresh uncertainties and strong banks will sail th rough. For entities like us, scaling would continue for some time. My biggest challenge will be to rebuild trust in the bank among customers,” says Kumar.

The CEO has outlined deposit mobilisation as a key focus in the near term. But Yes Bank may find it difficult to strengthen its liability franchise immediately, as customers have found more confidence in banks such as HDFC Bank and Kotak Mahindra Bank which have seen strong deposit growth in March.

Strong capitalisation will also have to be maintained. Indian banks have, historically, been weakly capitalised and even a moderate level of stress is enough to impact a bank’s balance sheet. The stagnation in economic activity means that a majority of sectors across manufacturing and services will see lower growth even after corporates and businesses are allowed to resume operations. “We are in an unknown unknown, it is not even known unknown,” says Guha.

Kumar’s intentions to go retail and boost deposit growth are workable, but in a normal economic scenario. The strength of Yes Bank’s digital banking platform should help it retain customers. If the bank pulls through this phase, it would help erase negativity surrounding it. The strength of Yes Bank will be tested and seen over the next six months.