Disha has been a driving force for climate change mobilisation and education in India since she was 19, also leading Greta Thunberg's Friday's For Future in India, to turn her family's personal experiences with water scarcity into learning opportunities for others 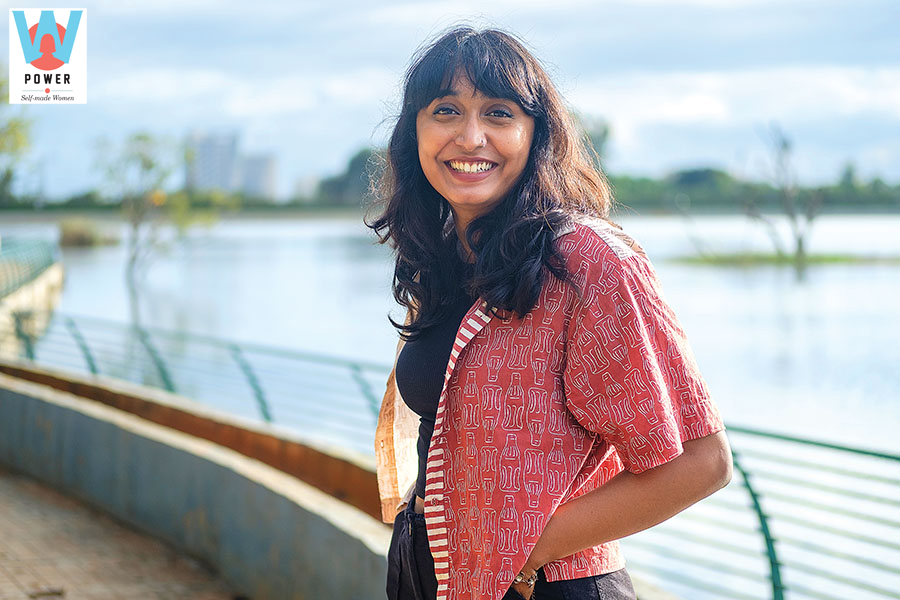 Raised in a family grappling with water crisis and electricity shortages, Disha Ravi, while growing up, believed that the hardships faced by the people in her village, Bandihalli in Karnataka, were normal. “I have seen my grandparents, who were farmers, struggle with drought, crop failure and flooding. My mother would tell me stories of how she carried water from the common well before she left for school. Back then, I didn’t realise that this was problematic,” says Disha.

She was always curious about climate change, but got a chance to study it in-depth only in college. “We don’t have climate education as part of our school curriculum, we have basic environmental studies which doesn’t cover the extensive damage climate change is causing. It wasn’t until I was 18 and had internet access that I started reading about climate change and its implications,” says the 23-year-old.

A BBA graduate from Mount Carmel College, Bengaluru, Disha has been a climate activist since the age of 19. She has been coordinating environmental strikes, taking part in clean-up drives, organising tree-planting exercises, climate action workshops, and online campaigns against projects considered detrimental to the environment, and has been doing outreach work with local communities and schools to create awareness.

Inspired by Swedish environmental activist Greta Thunberg, Disha, along with fellow climate enthusiasts, established Fridays for Future (FFF) in India in 2019. It is a global movement by young professionals and students who demand action from those in power for the climate crisis in the world. They seek answers on why a country’s policies aren’t in line with the various agreements to protect the environment. 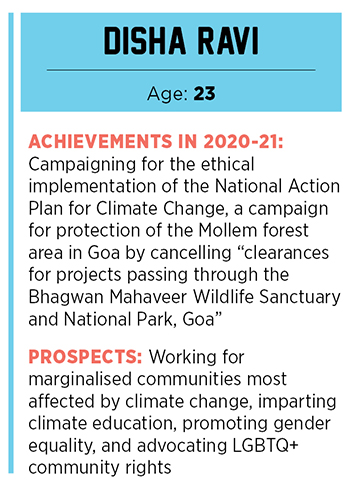 Currently leading FFF in India, Disha says social media is a helpful tool in disseminating information about climate change. “A lot of young people engage with the content that we put up on social media. We’ve seen that they are more concerned about it since a lot of them have experienced its implications to some extent and realise the urgency to act… the older generations are more oblivious to the changing environment as they believe the climate is meant to change,” she explains.

Disha, also a writer for a startup in Bengaluru, wants to make climate education accessible to all. “India doesn’t have climate education, and the most common problem is that people don’t understand the extent of the crisis because of the jargons. Most people don’t understand the promises being made at COP26… we need to break them down so that they engage with these proposed changes that will impact their future,” she adds. “India has set some ambitious targets at the conference, and I’m extremely concerned as these aren’t in line with our policies. The targets are impossible to achieve because we are too invested in coal and don’t have the resources or the infrastructure to shift to renewable sources, nor do our policies reflect climate emergency. Corporate benefit has been India’s priority over environmental consciousness.”

The activist was invited to report on the developments of COP26 from Glasgow, but her passport was withheld due to the ongoing ‘toolkit’ case against her. She was arrested on February 13 and charged with sedition and criminal conspiracy for sharing a ‘toolkit’—a document explaining an issue—on social media related to the farmers’ protests. Though she got bail 10 days later, her arrest was met with widespread outrage. Nine months on, the investigation has made little headway.

She is now working to ensure that India’s climate policies are implemented. “The National Action Plan for Climate Change [a government programme launched in 2008 that aims to mitigate the adverse impact of climate change] needs to be taken seriously… it is a good plan and we have been campaigning for its ethical implementation,” she says.

“I want to make sure that at a time of crisis, adivasis and other marginalised communities are the ones leading the climate conversation and negotiations as they are the worst affected. I also want to work towards climate education and reporting, gender equality, and LGBTQ+ community rights,” adds Disha.