Paralysed at 10, this para-shooter didn't let the tragedy hold her down. Armed with her supportive father, former India shooter Suma Shirur, and Abhinav Bindra's autobiography, she gunned and broke Paralympic records 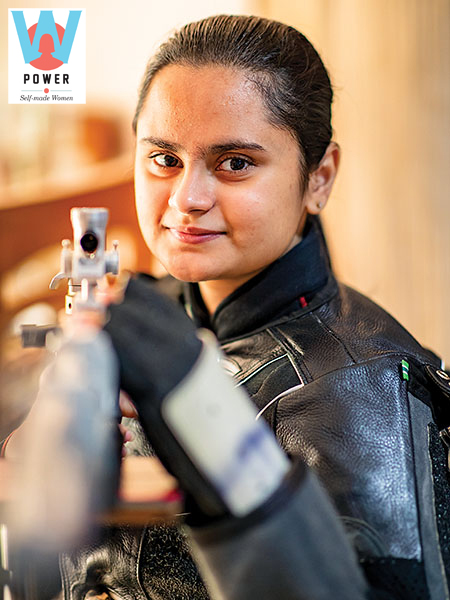 Avani Lekhara bagged a gold in the 10 mt air rifle standing event in the SH1 category at the Tokyo Paralympics
Image: Mayur Tekchandani for Forbes India

February 20, 2012. It is a date Avani Lekhara has not forgotten. Her family was travelling from Jaipur to Dholpur in Rajasthan when their car met with an accident, damaging her spinal cord and leaving her paralysed below the waist. The then-10-year-old was supposed to stay at home that day, but insisted on going along because she wanted to participate in a dance competition in school.

“I loved dancing and chose to travel the distance. I was sleeping in the back seat. My father was at the wheel when a speeding truck came from the front. He took a turn to avoid a mishap, but the car turned turtle,” recalls Lekhara. “I couldn’t believe I was fine one moment and immobile the next. It was a nightmare. I was on bed rest for seven months.”

August 30, 2021, is another date she is unlikely to forget. Lekhara, who turned 20 in November, bagged a gold in the 10 mt air rifle standing event in the SH1 category at the Tokyo Paralympics. She followed it with a bronze in the women’s 50 mt rifle 3 positions SH1 event, making her the first Indian woman to win multiple medals at the Paralympics.

The night before she won the gold, Lekhara was a bundle of nerves. Restless and unable to sleep, she went for a long walk to declutter her mind. It didn’t help that she finished seventh in the qualification round. But she regained her composure in the 45-minute break and told herself that the worst was over. “I took one shot at a time and decided to give my best. When I won, it was a surreal feeling,” she says.

Lekhara’s story is one of grit and gumption, and about not giving up. After her accident, she was stuck at home for two years, and turned into an introvert. She had to start from learning how to sit. When she resumed going to school in a wheelchair in 2014, it was a new experience. “I made new friends, opened up, and got a lot of confidence. When I started shooting a year later, life started looking up again,” she says. 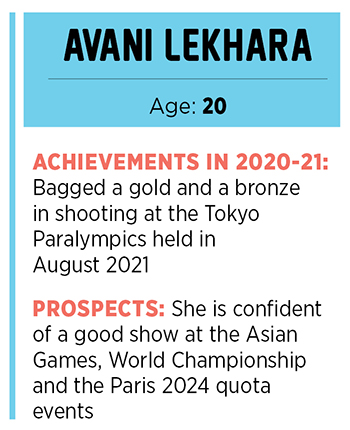 Her father Praveen introduced her to shooting, but Lekhara did not have any interest in the sport and had to overcome multiple challenges. She lacked the physical strength to hold a rifle, did not have a rifle of her own or a proper wheelchair for the sport, and importantly, no para shooting coaches.

It was at that time that she read Abhinav Bindra’s autobiography, A Shot At History: My Obsessive Journey To Olympic Gold, and got inspired to emulate India’s first individual Olympic gold medallist.

Praveen approached former India shooter Suma Shirur to coach his daughter. She did not respond as she had no experience of teaching a para athlete. When he wrote to her again after six months, she told him she would want to first meet Lekhara.

Says Shirur, an Olympian herself: “The moment I saw Avani, I fell in love with her. She was so cute! I had not even seen her shoot, but I said, ‘Why didn’t I say yes earlier?’”

Shirur explains that the first challenge was working on Lekhara’s mindset. “There was so much negativity in her. I had to bring her to a certain level with her own mind. It was draining and exhausting for me. But at the same time, her willingness to learn, her interest, questions, curiosity, desire to work hard and go all-out kept me motivated,” she says, adding that she is amazed to see a huge transformation in Lekhara, whom she met for the first time four years ago.

Lekhara’s determination was even more evident after the Paralympics were postponed because of the coronavirus and the lockdowns disrupted her outdoor training. Apart from continuing her physical and mental exercises, Lekhara installed a digital target setup at her 3-BHK apartment—something that Shirur had suggested—and would shoot from the kitchen to the master bedroom for practice. Her training would get interrupted if someone was getting ready or if there were guests at home. So, she focussed on practising when her parents—both of whom work for the Rajasthan Administrative Services—were out. “We started online coaching during Covid. And since Avani is expressive it became very effective,” says Shirur.

There were limitations, though. One cannot shoot 50 mt at home, for instance. It helped that there was a three-month camp before the Paralympics.

National shooting coach Subhash Rana says: “Avani was aggressive and balanced in her mind prior to the competition. She was clear about what she had to do. Technically she is strong, but mentally we had to calm her down.”

Lekhara, who was recently conferred the Khel Ratna, says her biggest lesson has been to never give up on her dreams. “If you believe you can do something, you can definitely achieve that,” she says. “Sometimes things look impossible, the surroundings can be negative, but that does not mean that the future won’t be happier and brighter.”

Addressed as the ‘golden girl’ by Prime Minister Narendra Modi, Lekhara has now set her sights on the Asian Games, World Championships as well as quota events for Paris 2024. “I’ll be happy even if one person is inspired or motivated by me,” she says.

Shooting has taught Lekhara to be patient. She says she has had to overcome many moments of self-doubt in her journey. “When you are a wheelchair user, you have to remind yourself daily that you are capable, beautiful and can do anything. I give positive affirmations to myself and that gives me the strength,” says Lekhara. “Nothing is worse than giving up. When life hits you, you should hit even harder. Just accept and love yourself… it took me a lot of time to do that. Do what you love instead of trying to prove something to someone else.”