How Sakshi Vij is melting electric hesitancy with Myles Zero 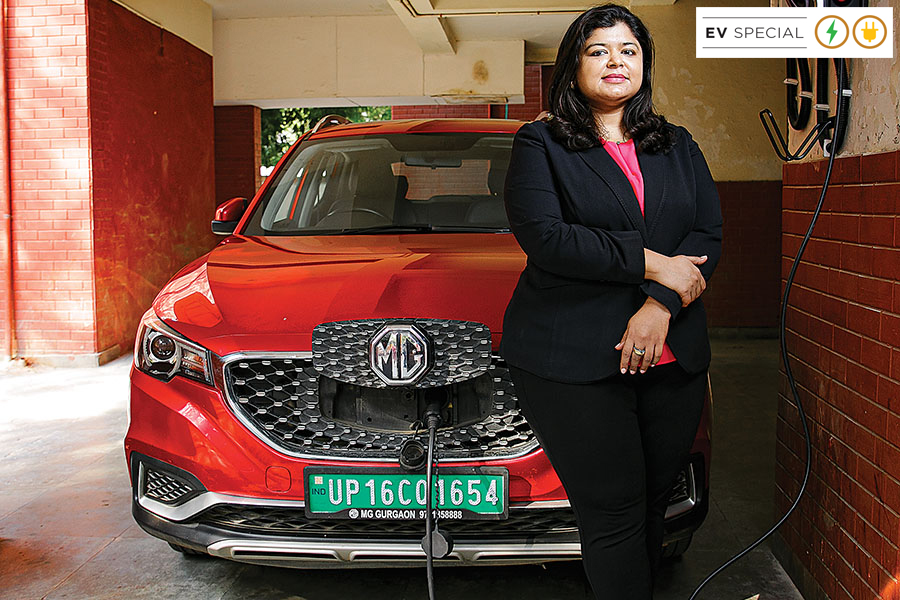 The toss-up between ‘electric’ and ‘shock’ was a no-brainer for Ritesh Dhingra. For the CEO of Cossmic Products, a manufacturer of personal care products, two dominant reasons for driving home an electric car this year were simple. First, the running costs of petrol and diesel vehicles were fast turning out to be a shocking experience. Equally disturbing was the devastating impact of fossil fuels on the environment. Mumbai-based Dhingra, who had owned multiple cars in the past, such as MG Hector and Hyundai Creta, subscribed to an electric car from MG Motor from Myles, an online car rental platform that rolled out electric vehicles (EVs) in its subscription plan ‘Myles Zero’ last year.

Dhingra reckons he made an electrifying choice. While the EV carried a tag of over ₹25 lakh, the businessman settled for a monthly payment of around ₹59,000 and drove the car home. There was no down payment, zero maintenance cost, and insurance too was covered. The hassle-free car ownership—with a minimum subscription period of 12 months for a new car—made ample sense. “Subscription helps you enjoy the latest technology without the risk of owning a car,” he says.

Cut to Delhi. Sakshi Vij too is excited. And she has all the reasons to be so. “EVs form 40 percent of vehicles on Myles Zero, which has 2,000 cars on its platform,” says the founder of Myles, started in 2013. Adoption for EVs on subscription, she underlines, will be far quicker than internal combustion engine (ICE) vehicles. “I think subscription will melt ICE,” she smiles.

Unlike electric two-wheelers, where consumers have a wide range of options and price points as low as ₹50,000, electric cars are still prohibitively priced. And it’s likely to remain so in the future. So the only way in which such cars can find a wider appeal is via subscription, which trumps leasing on a couple of counts, especially the biggest one—long lock-in periods. Vij explains why electric car subscription is set to take off in India. Such a flexible form of ownership, she says, takes care of three primary concerns of users.

First is the high total cost of ownership. Second is an uncertainty on the residual value of EVs. And the third is a wariness around battery life and charging. “Subscription smoothly tackles all such issues,” she says. The most compelling proposition is that suddenly a ₹40 lakh car comes down to ₹40,000 per month, she says. “You don’t have to think about fuel and fuelling it,” she adds.

For Myles Zero, interestingly, the first set of electric users happened to be senior citizens. What, though, made them take the bait was a bunch of factors such as high comfort, zero maintenance and less travel. The subscription, however, gathered pace over the last year as entrepreneurs, including startup founders, started jumping in large numbers on the bandwagon.

Back in Mumbai, Atul Yadav, a steel trader, bought a Tata EV on subscription. For the 35-year-old, though, the intent was different. “Silent vehicles make a loud statement,” he laughs. The trigger to try an EV was FOMO (fear of missing out). Driving an electric car, he explains, is the coolest thing around the world. “And it doesn’t make sense to buy,” he adds. The reason is not the cost, but apprehensions. “It’s a new technology and I don’t know how it will turn out to be,” he says. Better to hedge bets than display a false sense of bravado, he smiles.

Vij, for her part, reckons that the transition to electric would be gradual and not sudden. “It’s quite unlike 3G to 4G or now 5G,” she says. The difference is simple. In mobile technology, the device remained the same. In cars—which carry a much bigger ticket size—it’s not. People will also need time to make a switch from ICE to EV. Habits don’t change overnight. Another factor inhibiting wider adoption is limited choice in EVs. Original equipment manufacturers (OEMs), she lets on, must come with more options.

Customer hesitancy is reflected in the sales numbers. Out of the 34,316 units of EVs sold in September, only 1,221 were cars. While Tata Motors and MG Motors accounted for 98 percent of registrations in the month, the share of the former jumped from 58 percent in August to 72 percent. Meanwhile, two-wheeler EVs continued to clock high numbers: 16,641. An uptick in car subscription is clearly the answer if India wants to see more electric cars on the roads.

Vij is aggressively trying to do her bit by adding more heft to Myles Zero. The platform has partnered with Maruti Suzuki, Toyota, and MG, and is in talks with at least five more OEMs. In fact, a few OEMs want to explore the option of making electric cars and putting them on subscription only. “They just want to ensure that the initial cost of ownership and other hesitancies melt,” she says, adding that though the transition to EV would be gradual, the pace would not be slow by any means. “Over the next three years, there should be a significant growth in the EV segment,” she says, adding that Myles Zero is also working on adding electric two-wheelers on its platform.

India is slowly, but surely, getting charged up, and Myles Zero is ensuring that electric cars get more affordable and democratised.

Tweets by @forbesindia
Instagram's Mosseri to appear before US Senate; BigBasket to open 800 stores; and a chat with the co-founders of Bizongo
Avani Lekhara: Making impossible, possible