Game on: Tesla, Mercedes, and Geely are in the race for rolling out electric trucks

China's Geely Auto Group announced its arrival in the electric smart truck segment with the launch of Homtruck. Tesla's Semi and Daimler's Mercedes eActros are also getting ready for production 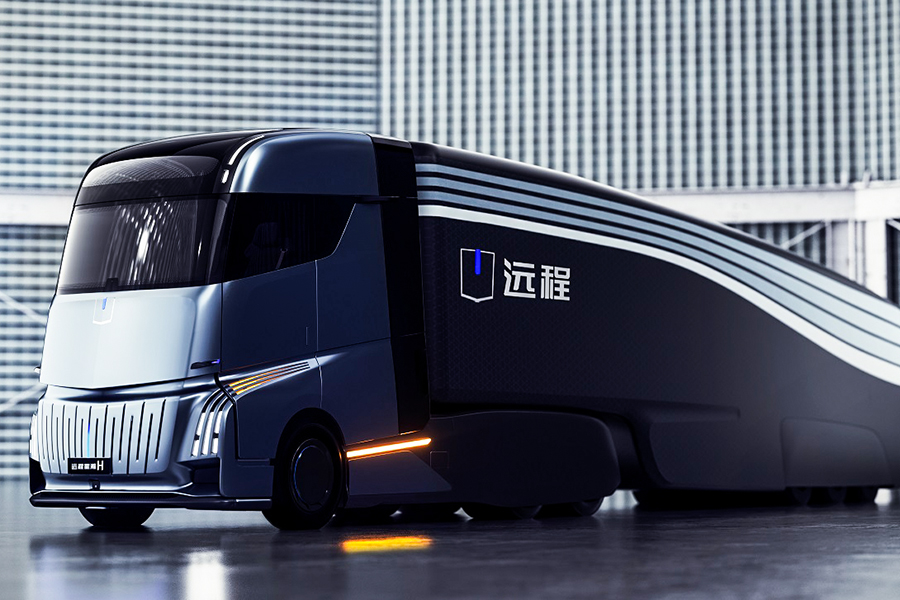 The Homtruck is billed as an intelligent electric truck from China's Geely Auto Group; Image: Geely

Farizon Auto, the commercial vehicle brand of China's Geely Auto Group, has unveiled the Homtruck, an all-new electric smart semi-truck, with production and first deliveries scheduled for 2024. On paper, it looks like a comfortable, connected and highly intelligent vehicle. Destined for sale outside of China, it will compete with incoming models already announced by Tesla and Daimler.

A home away from home

As its name suggests, the Homtruck is designed to make drivers feel right at home. Here, comfort is optimized with two distinct spaces, creating a zone reserved for driving and another for daily life. On board, there's a full bathroom, complete with shower and toilet, a single bed, and a kitchen with a refrigerator and even a small washing machine. For maximum comfort, the interior features soft-touch fabrics, sustainable plastics and bamboo grain materials.

Where the Homtruck impresses most is in its ability to interact with its environment. Thanks to its multitude of sensors and Lidar technology, the vehicle can capture valuable traffic data and adapt its route accordingly. In addition, the Homtruck's battery promises full recharging in just a few minutes, via fast charging stations. Finally, thanks to 5G, these trucks will be able to communicate with each other, notably to maintain a safe distance in convoy mode. The Homtruck will also be ready to receive over-the-air updates. Eventually, by 2030 at best, this truck could even become fully autonomous, thus veering into Tesla's territory.

Tesla on the starting line

Appearing as a prototype in 2017, Tesla's Semi is billed as the most powerful and safest electric truck, according to the American automaker. It boasts acceleration of 0 to 100 km/h in 20 seconds, when fully loaded. Like Tesla's cars, it will have Autopilot, the manufacturer's autonomous driving system, to regulate speed and cut the risk of collision. Range will be a little less than 500 km for the truck's basic version.

Another major player involved in building electric trucks is Daimler. The Mercedes eActros will be the German group's first 100% electric truck, with production scheduled to begin this year. These vehicles are equipped with an electric battery, offering up to 200 km of range on a single charge. The eActros LongHaul—a version with an extended range of around 500 km—is expected later, from 2024.

With models like these in the pipeline, and other manufacturers soon to be involved, the entire road transport sector could significantly reduce its CO2 emissions.