The founder and CEO of Mad Street Den helps companies in their digital and AI transformation journeys, with the aim to make every person an AI native 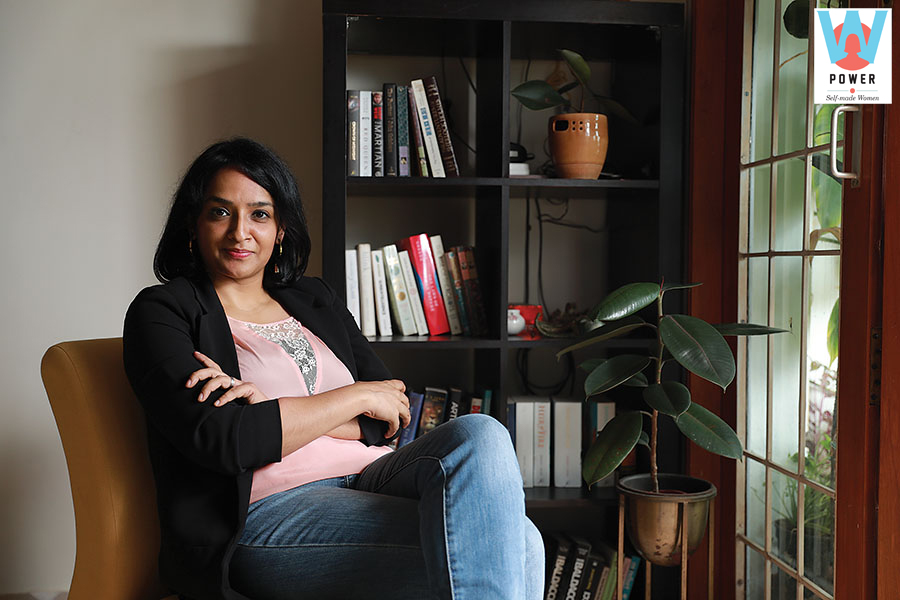 For about two decades now, ever since her days of studying interaction design at Carnegie Mellon University in the US, a running theme through Ashwini Asokan’s life has been her interest in the intersection of people and systems, and computers and culture. It flowed into Intel, where she spent a decade working on various types of internet-enabled products and businesses, all of it ultimately resulting in entrepreneurship. Asokan set up Mad Street Den (MSD) in 2013 along with husband Anand Chandrasekaran, a neuroscientist, and CTO of the company. They launched in the market in 2016. “I felt like I had picked up all those skills required to jump here and it felt like the perfect time to make that work. I think a lot of it is serendipitous… I am not one of those people that grew up thinking this is what I want to do,” says Asokan, over the phone from Chennai. It was, rather, one thing leading to another and “at some point, all the dots started to connect and when the dots connected it looked like this”, she says with a laugh.

What the interconnected dots look like is a computer vision and artificial intelligence (AI) firm with a platform Blox.ai that helps several industries like health care, education, finance, media and retail (under brand Vue.ai) transform with AI.

In retail, the platform helps in automating functions across warehousing, merchandising, and marketing as well as creating AI-centric experiences for customers by providing recommendations while, say, in education, it could help provide personalised learning.

Needless to say, the pandemic and the accompanying shift to online means Mad Street Den has had an even bigger opportunity. The firm works in three ways to help companies in their digital and AI transformation journeys: By organising their data, helping make sense of their customers and creating experiences for them, and automating “all the processes and workflows so that you are not actually sitting and doing things that you have no business doing,” says Asokan. The pandemic, she says, “just 10xed the speed at which people are adopting this right now”, resulting in a “multi-fold growth” at the firm.

Initially bootstrapped, MSD has raised over $35 million in funding since 2015, and its investors include Exfinity Venture Partners and Sequoia Capital India. Besides Indian companies like Tata Cliq and Kapiva, MSD counts Mercado Libre and Macy’s among its clients. 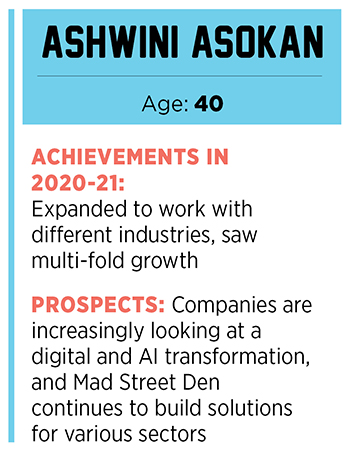 “Most AI teams tend to focus a lot on the tech. But with MSD, we actually had a CTO who was very strong on the technology side, and also Ashwini, who had a vision on how to make that useful and productive for customers,” says Anandamoy Roychowdhary, principal at Sequoia India. It is why, he adds, even though Mad Street Den competes with people who have raised 10x to 20x the amount of money they have, they have “beat them to win customer engagements all over the world”.

He recalls a board meeting when they first started doing a US go-to-market, and he said it would take 15-18 months to get their first customers. “Six,” he recalls Ashwini saying. “Ashwini was sort of fearless about it. She was like, ‘actually, I don’t think that’s true at all. I am going to win a bunch of deals, and I am going to do it in six months’.”

Asokan has also been a proponent of gender parity at the workplace, having built a team with almost 50 percent women across roles and departments. The pandemic saw a lot of women dropping out of the workforce, and the phenomenon played out at MSD too but, says Asokan, “We also saw this as a fantastic time where we started working on getting women back to work as well from break by actively starting to run programmes.”

For women entrepreneurs, much is different today from when Asokan started out in 2014-15, but in general, challenges remain. “I angel invest extensively, and every third resume I get has women founders in it. But it’s just scratching the surface,” she says. According to her, a lot more needs to change. “More funding, better ways of organising companies, ways for women to stay in the workforce and be supported through different phases of life. And for women to be at the helm of driving all types of companies from deep tech to consumer to SaaS.”

Tweets by @forbesindia
Matilda Kullu: The purpose of saving lives
Why China can't bury Peng Shuai and its #MeToo scandal