From former banker to chairperson of Salesforce India, Bhattacharya is proof that corporate leaders can keep reinventing themselves, successfully 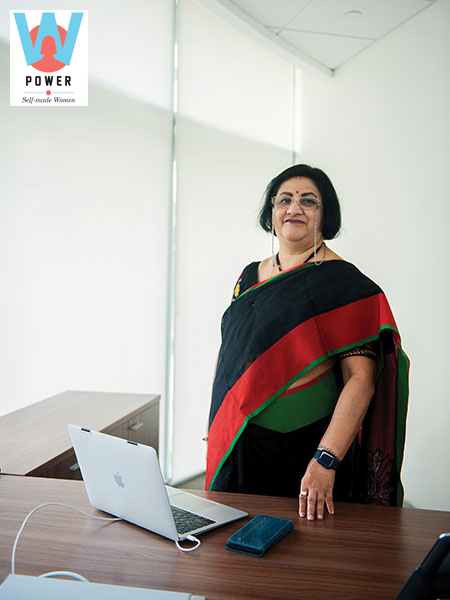 Tough people take on tough situations as challenges to overcome. This is why former banker Arundhati Bhattacharya—who led the journey of India’s largest bank, State Bank of India (SBI), through its toughest phase—decided, at 64, to reinvent and challenge herself in the world of information technology. “Was I successful because I had walked into the readymade platform of SBI?” Bhattacharya questioned herself while choosing a new role.

Raw data does not reflect Bhattacharya’s impact in reshaping SBI. Gross non-performing assets for the bank rose 462 basis points to 10.35 percent in September-end 2017, a few days before her four-year leadership ended. Provision for bad loans rose to near 66 percent from 58 percent in the same period, hurting profitability.

But, in the same period, SBI had completed a massively difficult and sensitive mega merger of five associate banks with the parent in 2017. She also led SBI’s digital transformation, as contours of its successful digital banking app Yono were put in place during her tenure, alongside a tie-up with Amazon for payments and commerce solutions for small businesses.

Banking and IT may appear disparate but “services” is at the core of both businesses. And Bhattacharya knows enough about these. After a few months of working as non-executive director on corporate boards, Bhattacharya joined Salesforce in April 2020 and 18 months into the job, any self-doubts over her performance should start to disappear.

Under Bhattacharya’s leadership, the company has jumped 29 ranks to No 7 in the Great Place to Work 2021 data, ahead of other IT companies such as Cisco Systems, Happiest Minds and Citrix Systems. Salesforce founder-chairman and CEO Marc Benioff had posed the low [36th rank] as a concern to Bhattacharya, before she agreed to the post. 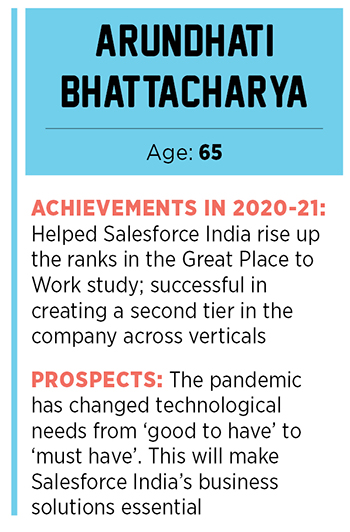 Salesforce India never had a CEO until Bhattacharya joined; there were only senior vice president positions. Now she has created a full second tier, with sales and support functions; a chief people officer, finance officer, besides an innovation and strategic accounts posts. “Most of these were earlier shared functions across the Asia-Pacific region,” Bhattacharya says. It was not easy, there were five to seven revisions in the operations chart. They were brought into India operations as the business was getting

Salesforce does not disclose earnings data by geographies, but in its Q2FY22 earnings call in August, its president and chief revenue officer Gavin Patterson said while the US is consistently growing at 20 percent, the Asia-Pacific region grew by 26 percent in revenue. Salesforce is the largest Customer Relationship Management (CRM) technology provider worldwide by revenues over the past eight years, according to IDC, a worldwide semi-annual software tracker.

The Salesforce India staff has doubled to over 5,000 now, with a plan to hire another 1,500 by March 2022. “We have grown rapidly. Most companies know that they will need to be omni-channel. The pandemic taught everyone that they cannot be cut off from customers, suppliers, dealers or employees,” says Bhattacharya.

“We are so fortunate to have Arundhati leading our business in India, which is an incredible hub for innovation and talent and home to our largest employee base outside the US. She is one of the world’s most remarkable business leaders, and every day she inspires those around her to do their best work,” Benioff tells Forbes India.

Benioff had given Bhattacharya a signed copy of his book Trailblazer: The Power of Business as the Greatest Platform for Change, a best-seller in business ethics and leadership. His move to support a local bill to fight homelessness by raising taxes and a self-initiative to reduce the gender pay gap in Salesforce are stories that appeal to Bhattacharya about Benioff. Salesforce has now spent $16.2 million to close the gender pay gap, even maintaining these standards while acquiring companies.

Salesforce, which started as a pure CRM company, offers marketing, commerce, analytics and integration tools to serve any customer in any industry. “Every organisation has understood that unless they don’t have a technology backbone it would be difficult to remain relevant and agile,” Bhattacharya adds. She highlights the recent acquisitions of MuleSoft, a platform to build application networks, and digital collaboration company Slack. “The aim is to serve the customer 360°,” she says.

Bhattacharya is also using her banking leadership skills to revamp operations here. At SBI, she had managed to get the insurance, credit cards and mutual funds businesses into leadership positions through collaborations, despite existing firewalls. “At Salesforce, I am trying to do the same, while remaining customer-centric,” she says.

The biggest challenge for her is to attract and retain enough skilled people. As India moves towards the $5 trillion GDP target, the concern is to find “industry-ready” engineers who graduate out of universities.

Tweets by @forbesindia
Vineeta Singh: Sugar Cosmetics, and the passion for the impossible
Aparna Purohit: Creating a space for stories to breathe