Vineeta Singh: Sugar Cosmetics, and the passion for the impossible

Sugar cosmetics is Singh's third startup, and one that she is determined to make ubiquitous in Indian women's makeup kits 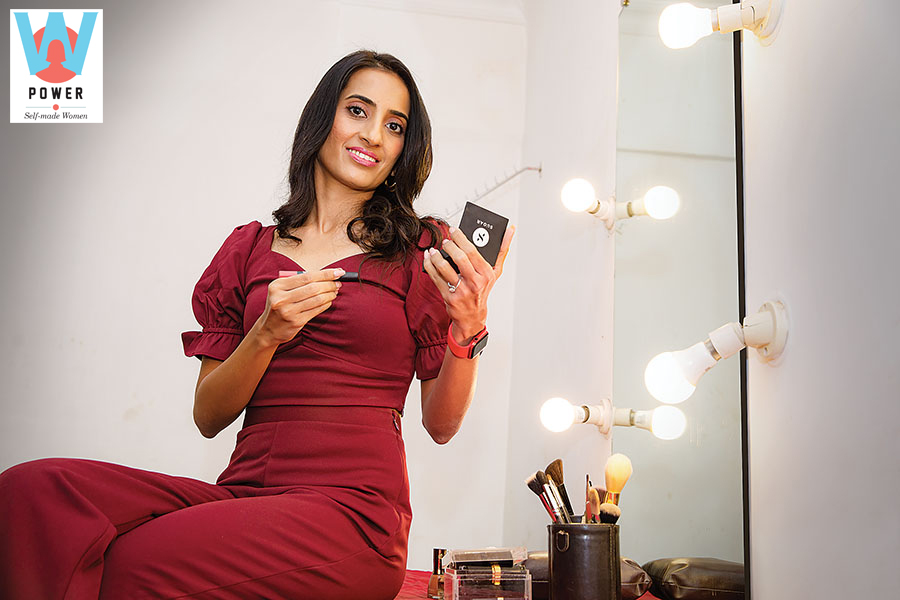 Vineeta Singh talks fondly of her father. A scientist at the All India Institute of Medical Sciences, 72-year-old Tej Singh has dedicated his life to the discovery of protein structures to enable the development of drugs for cancers and other diseases. “He worked 365 days of the year, including Sundays. As a kid, I’d see him go back to his lab after dinner and work through the night. His goal was to discover 600 protein structures during this lifetime,” says the younger Singh, co-founder and CEO of Sugar Cosmetics.

“I never understood his irrational passion,” continues Singh. “I’d argue with him about how crazy it was to dream about 600 when he was discovering 15 a year.” But last January, after more than 30 years of toiling, he hit his target. “I asked him how it felt about accomplishing his goal. Would he take a back seat? Finally retire? No. Instead, he said he still has it in him to do more discoveries and is as excited about it as he was on Day 1.”

“I now get him… because I feel the same way about Sugar,” she says. From generating a little under ₹2 crore in sales in the early years to now generating ₹2 crore in sales a day, the digital-first cosmetics brand has come a long way. Singh recalls how it took her and her co-founder husband Kaushik Mukherjee almost five years to go from seed to Series A round in funding. The interim was hard, she says, with the couple breaking their last ₹30 lakh fixed deposit to sputter along in the tough market. Mukherjee even considered taking up a job while Singh would run the show. Then, in 2017, India Quotient, an early backer, and Singapore-based RB Investments extended a lifeline to Sugar in an undisclosed Series A financing.

Sugar is Singh’s third startup. After graduating from IIT-Madras and IIM-Ahmedabad, she ditched a “₹1 crore” job offer from a leading investment bank to dive into entrepreneurship. “I wanted to do something fast and fun, quickly scale up my business and IPO it,” she says. But Quetzal, a background verification service for recruiters, which Singh founded in 2007, was a “spectacular failure”. The business was commoditised and so fought on price rather than value. “Such businesses just don’t work in India because there will always be someone who can do it cheaper than you,” explains Singh. 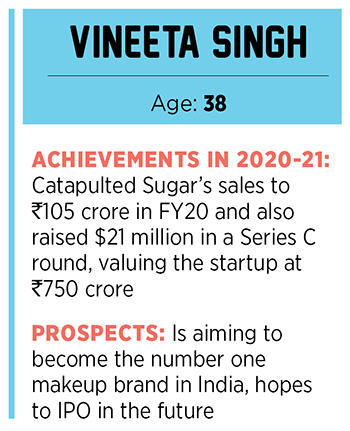 Besides she was passionate about building a consumer business for women. It was 2012, ecommerce in India was firing up and women increasingly had access to disposable income. Singh thought it apt to start Fab Bag, a subscription business that offered women an assortment of beauty products every month for a small fee. She ran the business for nine years by which time it had amassed 200,000 customers. This close-knit community of women shared their preferences, skin problems and dislikes with Singh. As she gleaned through the data, she realised the makeup brands that were available—foreign or local—didn’t cater to Indian skin tones or the Indian way of life. “Makeup had to be long-lasting and matt so that even if a customer travels by public transport on local trains or polluted roads, her makeup won’t come off,” she says.

Armed with these insights, Singh started Sugar in 2015. Customer education was at the heart of the business. “Education is a critical step before commerce happens in a category like beauty. Women need to know how to use a winged eyeliner before they buy one,” she says. The team used YouTube, Instagram and Sugar’s own app to reach out to customers. Unlike most digital-first brands, Sugar was early to develop an omnichannel presence. “Early on, we decided we would be present where our customers shop, whether that’s a local shop, Shoppers Stop or Nykaa. We would make it easy for them,” she says.

Today, Sugar has a physical presence across 2,500-plus outlets in over 130 cities across India. It hit ₹105 crore in revenue in FY20 and raised $21 million in venture funding led by Elevation Capital, valuing the startup at ₹750 crore.

“Vineeta is very energetic, loves multitasking, and is detail-oriented. In the last three years of hectic growth at Sugar, she has been the inspiration within the team for ambition and high performance,” says Madhukar Sinha, founding partner, India Quotient.

Despite the heady success, Singh, an ultra-marathoner and triathlete whose achievements include completing the gruelling 89-kilometre Comrades run in South Africa three years in a row, says she’s only getting started. “We’re going after the ₹10,000 crore beauty market in India.”

She quips, “All I want to do is keep building. I realise now how similar I am to my father. Irrational passion must be genetic.”

Tweets by @forbesindia
The e-plane company: Will India's first air taxi be electric?
Arundhati Bhattacharya: Reinventing herself, again and again