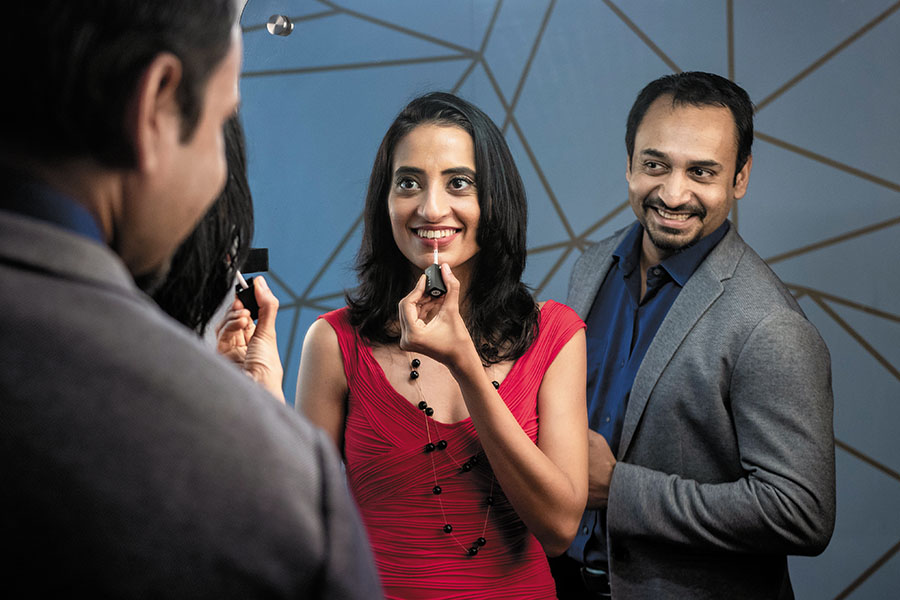 In 2015, when Vineeta Singh and Kaushik Mukherjee launched their second venture, “nothing else mattered”. Reason: Their first startup, a monthly makeup and beauty subscription for women called Fabbag, was not in great shape. In spite of three years of operations, the venture had not scaled up. The business got trapped in the lure of recurring revenue. “India was not ready for a subscription-based model in beauty,” says Mukherjee. He explains how Fabbag worked: Every month, a subscriber would get a bag with four to five beauty products, which would be curated from different brands based on skin type and makeup preference of the consumer. The second venture, again in cosmetics and direct to consumer, was Sugar Cosmetics—and their shot at redemption.

The first year of operations, which yielded sales of ₹52 lakh, was nowhere close to what the duo imagined. Though the figures were better than Fabbag, they were not enough. To begin with, the curse of bootstrapped life hit them: A paucity of working capital. In spite of an uptick in demand, only three products could be rolled out in the first year. In fact, for six months they couldn’t import one of their products from Germany. Finally, the duo took a loan, paid the manufacturers, cleared the dues, and imported the product which turned out to be their bestseller: Lip crayon. Revenues jumped almost six times in the second year: ₹3 crore.

The venture began to roll. Sales leapfrogged to ₹11 crore in the year ended March 2017; two years later, Sugar did sales of ₹54 crore, which almost doubled, to ₹105 crore in fiscal 2020.

“It’s sugar minus calories,” Singh laughs. Over 65 percent of revenues, she lets on, come from lipsticks, and some of the bestseller brands are ‘Nothing Else Matters’, ‘Matte As Hell’, and ‘Seal The Show’.

Why Sugar? Mukherjee reveals the untold story. The duo shortlisted five names, and ran an online poll. Sugar appealed most to the millennials. But the clincher was a unanimous feedback that the name didn’t sound like a new brand. It had a ring of familiarity. “This insight was powerful,” he says. After all, the duo faced a huge risk of being labelled as a newbie in a cosmetic market dominated by giants.

Sugar, contend venture capitalists, is well-positioned at the intersection of two major trends—a fast-growing beauty market and rapidly increasing online penetration. “A team with learnings from a similar business and early proof of concept in offline retail gave us the confidence that it is on a path to a much bigger and successful business,” says Abhay Pandey, general partner at A91 Partners, one of the backers of the cosmetic company. The startup has raised ₹100 crore so far and counts RB Ventures and India Quotient among its investors. 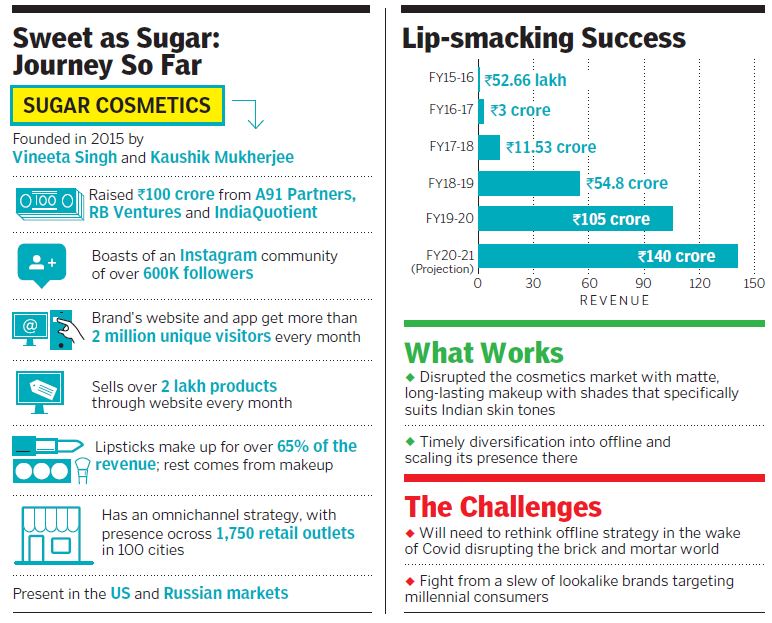 The journey of Sugar has been different from other direct to consumer brands. After staying as an online-only brand for the first two years, it ventured into offline retail and now has a presence across 1,750 outlets in 100 cities. The hybrid model resulted in growth at a faster clip, much similar to what smartphone brand Xiaomi has been witnessing over the last two years. The Chinese brand entered India as an online player and disrupted the segment where offline ruled the roost.

Sugar too mirrors a similar pattern. Starting as online-only, Mukherjee stresses, was a no-brainer. “Retail is a power play in India,” he asserts. Real estate is expensive, the business is capital-intensive, and small and marginal players get elbowed out. The biggest edge in going digital for Davids like Sugar, though, was something that even Goliaths could never manage to get: Loyal customers, who were yearning for a brand who could talk to them. The offline players have defined what beauty should be. The narrative was always under their control, and they managed it with celebrities. Millennials, Singh rues, had little choice. With the advent of direct to consumer brands, they got empowered by getting back their voice. This changed the game for Sugar. “Consumers started rooting for Davids,” she smiles. “Digital has levelled the playing ground in the David versus Goliath fight.”

Millennials in every nook and cranny of India, Sakshi Chopra, principal at Sequoia Capital India, have a new window to a wider world. The number of online-first brands has grown sharply in India in the last three years, and much of the growth is coming from outside India’s major metropolises. “Over 400 million Indians have come online in the last four years, thanks to affordable smartphones and rock-bottom data plans,” she adds. (Read ‘Direct to millennials, in Bharat’)

The brick and mortar players, Singh stresses, always used online as a liquidation platform. “It was used to clear the old stocks,” she says. Sugar, she lets on, was founded on three pillars: Listening to consumers, staying away from discounting and focusing on content for the consumers. The strategy has worked well, and the duo intends to remain digital natives in spite of their offline presence.

After crossing ₹100 crore in revenue in five years, Sugar saw its biggest success post lockdown. “We saw our best month in June,” says Singh, who quickly qualifies her statement. “In fact, what we sold in June we have already sold that in the first two weeks of July,” she smiles. “This is the beauty of being a brand that has its roots in digital,” she says.

Covid and lockdown have not only changed the market dynamics but also triggered a consumer behaviour change. “Consumers are buying fresh merchandise at MRP. This has made big brands sit up and take notice,” says Singh. Online, she lets on, is not the place to buy sasta (cheap). The perception and the rules of the game are changing. For the duo, the new world, post-Covid, is as sweet as sugar.

Tweets by @forbesindia
Celebrity photographer Prashant Samtani is a perfect example of how taking Risks & Hardwork can lead to Success
I.T.S Ghaziabad celebrating a glorious journey of 25 years