How Vahdam Teas cracked the code by pitching the India story abroad. Will this work back in India? 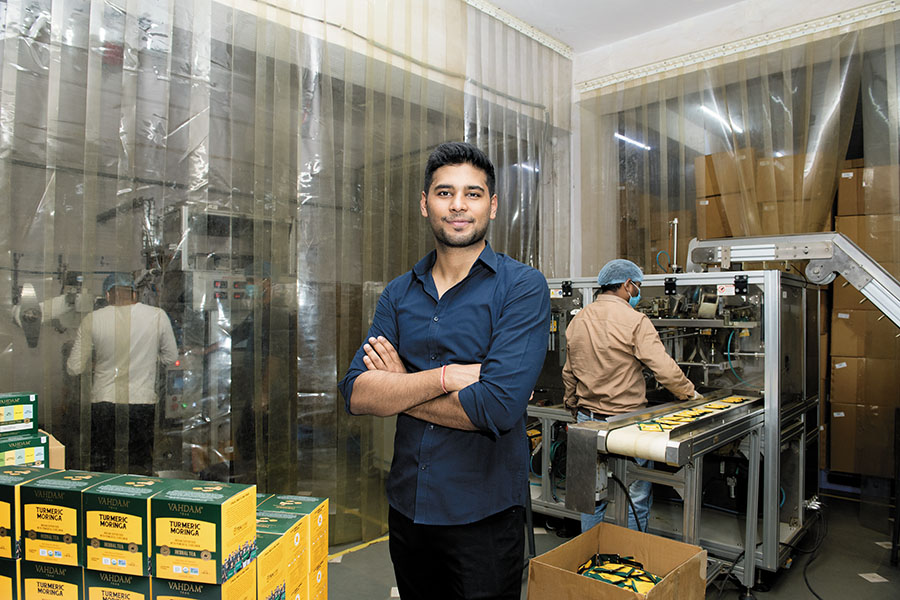 For almost a year after starting an online tea venture in 2015, Bala Sarda lived with a sinking feeling. “I was embarrassed to even talk about it,” he confesses. The 23-year-old nursed an ambition of creating a premium brand and taking it abroad. Tea was a logical foray for the fourth-generation entrepreneur whose family was in the business of retailing and exporting tea since 1931, when a small store, Nathmulls Tea, was opened in Darjeeling.

Saddled with a rich legacy, young Sarda started an online-only premium tea brand Vahdam, which was the reverse anagram of his father’s name, Madhav. One year into the business, the fledgling startup posted decent revenue numbers: ₹1.5 crore. In fact, 95 percent of its sales came from abroad, including the biggest market, the US. Yet, the founder was not ecstatic.

Sarda was battling mental demons on multiple fronts. First, most of his friends in college had either joined MBA courses in the US or landed consulting jobs at the likes of McKinsey and Bain. “My business was still not glamorous; tea was looked upon as a commodity back home, and I was struggling to sell it on the internet,” he recounts. The feeling of ‘missing out’ was profound.

Second, in spite of clocking reasonable sales in the first year, Sarda had to struggle for the next six months to get investors on board. Multiple pitches, innumerable meetings, countless rejections by venture capitalists and shrugs by industry veterans had made him start doubting himself, and his vision. “I could have grown 10 percent year-on-year and built something small. But I needed money to back my plan,” he says, explaining the reason behind hunting for funders. Sadly, there were no takers for a global premium tea brand from India. Sarda was undaunted.

Cut to 2020. Sarda’s tenacity and going against the odds seems to be paying off. Vahdam has become a ₹100-crore brand, and turned profitable since April this year; it gets shipped to over 100 countries, has raised $17 million in funding, and now gets half of its revenue from the US and 30 percent from Europe. In five years, Sarda too is a transformed entrepreneur. “In hindsight, we tend to take investor rejection more seriously than we need to be doing,” he says. What matters in the end, he adds, is whether you have the backing of consumers. “Self-doubt can be your biggest enemy. I never gave up.”

The online-only model gets a thumbs up from industry experts today. Tea, one of the largest consumed beverages, traditionally reaches consumers through the supply chain of farms and auctions; it is then stored and packaged by the brands and delivered to the consumers through a multi-layered distribution structure, explains KS Narayanan, a food and beverage analyst. “Vahdam has created a fresher delivery model,” he says, pointing to how the upstart stood out in a cluttered market. One of the salient aspects of tea is that it is sold on the premise of freshness. In reality, though, the supply chain was not delivering the promise.

Vahdam channelled the tea directly from the estates to the consumers, and in the process, bypassed all the non-value adding middlemen. They were further assisted, underlines Narayanan, by the growth of the premium variety such as green tea, single origin tea, organic etc. “They were able to put together a robust business model to tap into this emerging premium segment,” he adds. By unearthing unexplored varieties and blending with the available rich spices in the country, Vahdam is well-positioned to capitalise on the growing health consciousness sweeping across the world, maintains Narayanan.

Sarda explains the biggest edge of an online-only model. “You fail quickly, but it’s not fatal,” he says. For any brand opting to go offline to begin with, he lets on, one has to go with a fixed number of products, and this comes after months of research. “But there’s no guarantee that they will fly off the shelves,” he says. So if a launch doesn’t work or a product fails, it badly hits the brand. Now contrast it with an online venture. Vahdam, he stresses, has over 150 SKUs (stock keeping units). “We discontinued many, we iterated on hundreds of them and made them much better,” he says.

What an online-first model, especially for a consumer and FMCG brand, also does is that it helps the fledgling venture miss the ‘tyranny of the unofficial offline mafia’.

KV Sridhar, an advertising veteran, entrepreneur and global chief creative officer at Nihilent-Hypercollective, explains how the ‘mafia’ has been working in India in the offline space for decades. In FMCG and consumer products, offline or brick and mortar has always been the name of the game. “It was all about flaunting the distribution reach and using it to muscle out small, new brands,” he says. The big companies dictated terms to stockists, distributors and retailers. “There was no room and chance for a newcomer,” he says.

Online has shifted the power into the hands of the digital entrepreneurs. “The rules of the game have changed,” asserts Sridhar. It’s no longer about deep pockets, but deep consumer insights.

For Vahdam, the quest to create a perfect cuppa did have its share of misses. A big miss, in fact, happened quite early in the journey. Like any tea entrepreneur or retailer, Sarda too followed the herd mentality of opening a corporate office and factory in Siliguri, West Bengal. The reasons were obvious: Proximity to Kolkata, the tea capital of India; quick access to tea-growing regions of Darjeeling and Assam, and easy availability of technical manpower. It took three months to build the base. But just two weeks into operations, Sarda decided to relocate to Delhi. High moisture in Bengal was turning out to be the villain. Moisture, explains Sarda, is the biggest enemy of tea. The bootstrapped startup wasted enough resources and time during the early part of the journey.

The journey ahead, for sure, will have potential roadblocks. One of the challenges will be to live up to the promise of consistency. Having taken the brand globally, Vahdam needs to ensure that the consumer experience remains best in class, says Narayanan. This is crucial given that Vahdam is tapping into the premium segment, where consumers are discerning and demand nothing but the best and would be willing to pay for a great experience. “They need to constantly enhance the experience and build on the brand values,” he adds, pointing out another potential irritant. Addressing the mass market with such a model, he stresses, may not be appropriate. To disrupt such a market, they would need a farm to cup approach.

Sarda, for his part, reckons that staying focussed is the biggest challenge. “We have created a premium, scalable and profitable brand,” he says. The big task now is to not lose the bigger picture of keeping consumers happy. “When you raise money, you tend to think that you can do anything, and launch a lot of products,” he says. The point is, capital must not take focus away from the customer. “The vision remains to build a billion-dollar brand loved by customers.”

Tweets by @forbes_india
Uncertainty during the pandemic: Lessons from expert entrepreneurs
Entrepreneur Mohammed Shakaoat Values Teamwork More Than Anything