After carving a niche in the baby care segment with toxin-free products, Mamaearth has quickly evolved as a personal care brand 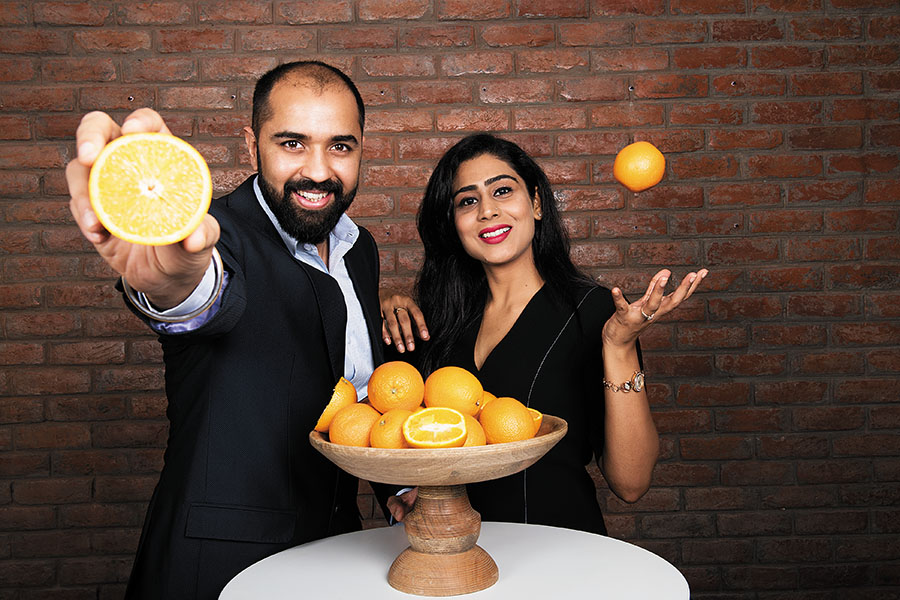 Varun and Ghazal Alagh, the co-founders of Mamaearth, at their corporate office in Gurugram
Image: Amit Verma


Seven year after Aamir Khan-starrer 3 Idiots took the big screens across the country by storm, a husband-wife duo in Gurugram began directing and producing an unofficial sequel of the blockbuster by rolling out their online-first venture. The theme for Varun and Ghazal Alagh remained the same—defying norms and listening to one’s heart; the plot too mirrored the original movie where the protagonists had to fight formidable odds, and the chances of being dubbed ‘idiots’ was also quite high. There was a difference, though. “We are two idiots,” smiles Ghazal, who along with her husband rolled out toxin-free babycare product startup Mamaearth in 2016.

Varun, who had been with Coca-Cola as senior brand manager for close to four years, and for six years with Diageo and Hindustan Unilever before that, was taking the entrepreneurial plunge after quitting a ‘comfortable’ job. ‘Only an idiot takes such a huge risk’ was one of the jibes. Another common taunt was ‘you guys don’t stand a chance against the J&Js and HULs of the world’.

Ghazal, too, had to encounter unsolicited advice. Queries like “Who thinks of toxin-free products in India…” haunted the gritty artist, who started her professional journey as a corporate trainer and ran a painting studio from home before Mamaearth.

The duo stuck to their guns, and went direct to the consumers. Now it was the turn of consumer sector analysts and funders to hurl the ‘idiot’ volley. “Who sells only online” was the question. Varun had the answer: It’s the best medium for what the founders had in mind. For one, they were trying to make and sell something on a small scale. For another, the brand had a premium proposition so it wanted to reach out to only metro consumers to begin with. The husband-wife duo wanted to test the waters before taking a plunge. “Online was the best, and the only, place to start,” says Varun, who also battled scepticism from within, with his inclination for offline that stemmed from a decade of working with brick-and-mortar companies.

Eventually, what came to aid was the philosophy propagated by Rancho, the protagonist in 3 Idiots. Pursue excellence, Rancho remarked in the movie, and success will follow.

Cut to 2020. Success has indeed followed the two idiots, who persisted with their dream of disrupting the world of personal care.

In January this year, the duo raised ₹130 crore in a round led by Sequoia Capital. The funding, the biggest round for any internet-first consumer company in India, came on the back of strong growth. From just ₹22 lakh in sales in fiscal 2017, it grew almost 25 times in year to ₹5.30 crore.

The momentum only gathered pace. By fiscal 2019, sales had touched ₹16 crore. At the same time, the startup was transforming from a babycare to a personal care product company. That resulted in a giant leap by fiscal 2020, to a top line of ₹115 crore. The founders claim a run rate of ₹300 crore for the current year, and have set a target of ₹1,000 crore by 2023.

The ambitious target looks achievable given that headroom for growth is massive. Of an estimated $15 billion personal care product market in India, online channels account for only 3-5 percent of sales. With 15-20 percent of Indian shoppers influenced digitally and their number expected to double in the next 7-8 years, digital-first brands have the potential to redefine the architecture of tomorrow’s FMCG companies, says Ishaan Mittal, principal, Sequoia Capital India. “This is precisely what Mamaearth is doing,” adds Mittal.

The startup is also disrupting another segment: The ₹9,000 crore skincare market. It has launched solutions for acne, pigmentation and hair fall under the brand The Derma Co. The reason to take a stab at a new market was simple. Over 50 percent of millennials suffer from derma ailments. And the doctor to patient ratio for dermatologists in India stands at 1:15 lakh. “We understand millennials and we will build brands for them,” says Ghazal. “The journey has begun.”

The ride, though, to becoming the fastest FMCG startup to hit ₹100 crore was littered with roadblocks. The biggest one to begin with was grabbing attention of investors and the right kind of consumers. Both, as it turned out, remained elusive for a while.

In June 2017, someone from Titan Capital, the fund launched by Snapdeal founders Kunal Bahl and Rohit Bansal, called to explore investment options. The call landed on the customer care number that used to be attended by Varun and Ghazal themselves. Both stared blankly at each other before Varun pretended to be an employee and answered. That resulted in a meeting, and Titan came on board.

Six months later came another unexpected call. Rishabh Mariwala, son of Marico founder Harsh Mariwala, was curious about the brand his wife had picked up for their 15-day-old baby. What followed was an investment from Sharrp Ventures, the family office of Harsh Mariwala.

The next big hurdle now came from the execution side. The duo didn’t focus much on hiring and building the right team. “One should hire for tomorrow. We were hiring for yesterday,” rues Varun, who has worked extensively on this aspect over the last year. The results are encouraging. “That’s the single biggest lever for our growth,” he says.

Though the duo have had a magical run, everything they touched didn’t turn into gold. Take, for instance, the move to get into food and nutrition by launching traditional recipes and products (tea, supplements) for mothers. The intent was great. The result, though, was disappointing. Reason: Brand perception. The consumers associated Mamaearth with personal care products. There was another problem. Supply chain for sourcing these products was drastically different from personal care. “We exited within six months,” says Ghazal.

Another mistake came when the duo ventured into beauty products in 2017. Since the recurring and target consumers were mothers, the communication was also designed to appeal only to that segment. It backfired. People were coming to the site but were not buying. Six months into the launch, the duo tried to find out the reason for the lukewarm response. Consumers, it turned out, perceived the products to be only for expectant moms. The mistake was rectified. The company took a unisex positioning. The move paid off. Now 48 percent of buyers of the personal care products are men. The company intends to stick to its unisex branding, Varun explains. “People are buying into our why, and our why is stronger than our what,” he says, adding that the brand caters to over 2 million consumers across 25,000 pin codes.

Investors, too, have bought into the story of Mamaearth. VS Kannan Sitaram, venture partner at Fireside Ventures, one of the early backers of the startup, explains why the venture fund has been bullish on online-first consumer brands. First, in FMCG, getting offline distribution is quite challenging. During the initial stages, about 40-50 percent of the MRP (maximum retail price) can go into just getting the products on the shelf. Besides, business at retail outlets won’t be high. “This makes the cost of acquiring an order high,” he says. For the retailer, too, the VC lets on, replacing an existing brand with a new one is a gamble.

The business landscape, though, has changed over the last few years as internet usage has exploded and the cost of smartphones has dropped. “This means more people are consuming content online,” he says. Now, one can create demand by going online. “With a small capital, you can actually build bigger brands today,” says Sitaram.

Varun highlights one more meaning of ‘bigger’: Right unit economics. “We are not in the business of building castles in the air,” he says, claiming Mamaearth is profitable. The focus will always remain on excellence and the right way of doing business. Looks like a plan that Warren Buffet professes: An idiot with a plan can beat a genius without one.