Giants such as Infosys and Wipro have been ramping up local presence in the US, their biggest market, and experts say the recent H-1B ban will be more of an irritant than a challenge in the long run 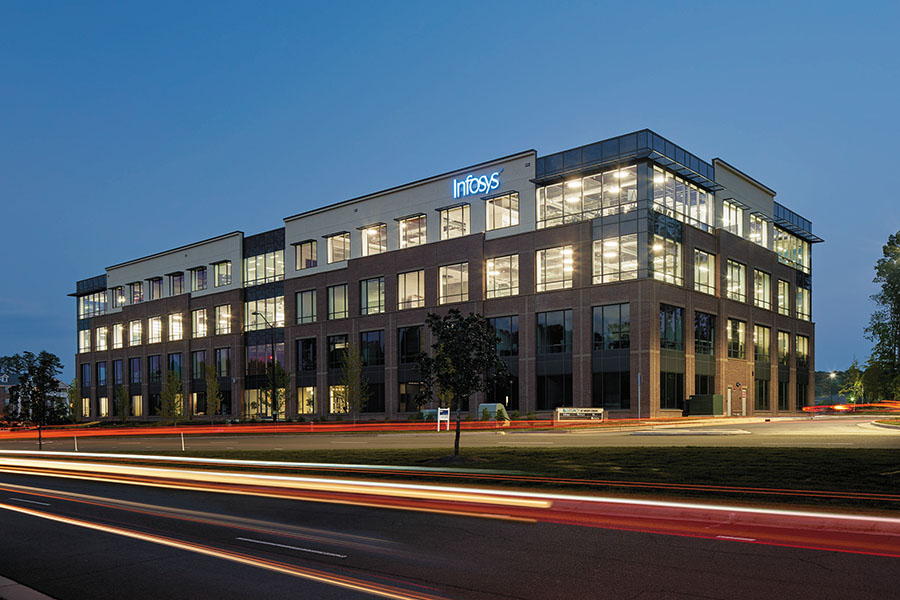 Infosys's Technology and Innovation Center in North Carolina, US. The company has recruited more than 13,000 US nationals till date
Image: Courtesy Infosys

They are two sides to a coin: The June 22 order by US President Donald Trump to suspend the H-1B and a few other non-immigrant visas could see companies sending more IT services work to centres outside the US, both India and elsewhere; at the same time, India’s biggest IT companies are likely to see minimal impact from the ban, according to experts, because they have been ramping up their local presence in the US.

“On the H-1B visa [ban], obviously, it does not really make any logical sense. Various independent studies have clearly demonstrated the value that Indian IT service providers are adding to the US economy and how they make American companies competitive,” said UB Pravin Rao, COO of Infosys, on July 15 while discussing the company’s quarterly results. “Having said that, in the short term, we do not see any impact because anyway there has been zero travel due to the travel restrictions, and even the consulates are shut down. So, in the short-term till December it does not make any difference.”

“In the short term, and by that I mean the next six months, the real impact of this will be minimal,” says Peter Bendor-Samuel, founder of Everest Group that advices large corporations on technology and strategy. Agreeing with Rao, he says that while it will interrupt companies’ ability to bring in talent, most companies have been stepping up US-based recruiting to strengthen their teams in the country for some time now.

Furthermore, the talent they already have in-country will not be affected by these regulations. “When we add the Covid-19-induced reduction of demand, it seems highly likely that they will be able to make do,” says Bendor-Samuel.

Infosys’s focus on localisation in the US has helped and more than 60 percent of the Bengaluru-headquartered company’s employees are “visa independent”, Rao said. In May 2017, the company announced it would recruit 10,000 US nationals over the next two years and build four technology and innovation hubs in the US. Rao said the company has recruited more than 13,000 US nationals till date. “So, from our perspective, we are entirely de-risked and I mean even in the medium to long term we do not see an impact… we should be okay in dealing with this.”

However, if these restrictions persist after the US presidential elections in November, then companies will face a more complicated situation. Despite moving to hire more US employees, they are still dependent on importing talent. Making a complete switch-over will raise costs but not prove insurmountable. A further annoyance will be the constraint on moving managerial and leadership talent in and out of the US. Once again, they will be able to cope, but over time this will affect career planning and trajectories, Bendor-Samuel says.

Many, but not all, of the Indian IT companies have been strengthening their in-country recruiting, and have been replicating in the US their training and development structures perfected in India. 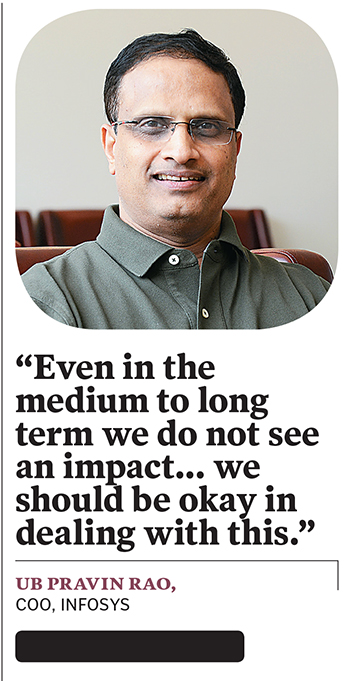 “We have been building a talent pool that is distributed, local and diverse. Approximately 70 percent of Wipro's workforce in the US are locals,” says Saurabh Govil, president and CHRO, Wipro. Similarly, in all other geographies, Wipro has been expanding its localisation footprint. “We do not anticipate a big disruption based on the recently announced changes,” he says.

Automation has also helped drive the shift from labour to technology arbitrage, says DD Mishra, senior research director at consultancy Gartner. Increased dependence on collaboration tools has helped to drive down physical deployment. In addition, automation and localisation have helped to address the dependency on offshore resources. “In my view, American businesses will be more impacted as this will slow down their growth. Especially at a time when they require to drive down the cost and recover fast, this comes as a blow to them,” Mishra says.

This temporary ban will impact the ability of both US and India tech industries to bring in non-immigrants, including H-1B visa holders, to the US till Dec 2020, says Shivendra Singh, vice president and head of global trade development at Nasscom, Indian IT industry’s lobby. The impact would be seen more between October and December 2020, the period when the new H-1B season commences if the current travel restrictions are relaxed. The announcement could have a negative impact on US economic recovery and will harm local job creation. Such sentiments have been expressed by leading US associations and CEOs as well, Singh says.

Even though Indian IT companies have hired tens of thousands of Americans and invested billions of dollars in recent years, they, like others in the sector, utilise high-skilled individuals who bridge a critical skills gap to service US clients. Nasscom is lobbying for this temporary restriction to be shortened to 90 days.

In the long run, the US might return to an open stance towards immigration, particularly for high-end talent, Bendor-Samuel says. He feels it is also likely that the allocation of H-1B and other visas could evolve and be less favourable toward the services industry. This will further necessitate the need of the services industry to strengthen its hiring of local US talent.

“As an American company with global operations, Cognizant is committed to hiring the best and brightest people to meet our clients’ needs, no matter where they are from. This includes US citizens and residents. Cognizant is investing in and supporting training and retraining initiatives across the country,” says a spokesperson for Cognizant Technology Solutions.

Enabling a strong supply of skilled technical talent is important to US competitiveness and to the company’s client base. Accordingly, it follows relevant legislative and regulatory actions that could affect its employees, business and clients, the spokesperson says. “Our current H-1B visa-holding employees are not affected by the suspension.”

Gartner’s Mishra believes that business and technology are intertwined and inseparable. “I am not sure there is any strategic thinking behind this ban and, even from the political perspective, if it will be helpful.”  US businesses will explore alternatives to this, which will cause bigger impact on jobs, he says. “It’s a lose-lose situation for everyone.”

The top seven Indian IT companies for FY 2019 took around 6 percent of the 85,000 H-1B visas given out that year, Singh says. This has been due to a number of factors including digital transformation, having the need for domain knowledge and need to be near the client. However, Indian nationals overall get around 75 percent of the H-1B visas, which is a testimony to their skill set, he says.

Singh adds that there is still a lot of speculation as to what policy changes will come into force in a Covid-19 recovery era. While the current proclamation is in place till the end of 2020, a set of regulatory promulgations are in the offing with the ostensible objective of making efficient allocation of H-1B visas.

It is still early to predict implications, but the rate at which the industry is transforming in the new normal proves its ability to find the right balance to cater to global challenges. With the Covid-19 driven contraction in the global economy, Mishra says that customers of IT companies have already started offshoring more work. Many customers are now driving this aggressively to bring down the costs.

Bendor-Samuel has a slightly different view: One of the easiest ways of meeting the increasing demand for cost savings due to the recession caused by the pandemic is moving work to low-cost India.

Having said that, the IT industry has been surprised that many customers are looking for other ways to save money, which involves accelerating their digital transformation and then have this tech stack managed from the US. The Indian firms are doing well in these opportunities so they look to be well positioned to win business but it may not result in as much new work for their Indian operations.

Indian IT companies have successfully adopted a hybrid working model for the 4 million employees in the industry, wherein they can work remotely as well as from physical offices. This has ensured business continuity during the pandemic, entailing that organisations in any part of the world will not require their workforce to be physically present on-site and employees can continue to work remotely from any region.

The global delivery model continues to evolve and India enjoys a 55 percent market share in global tech services sourcing. This is due to a combination of multiple factors: India has a growing innovation ecosystem comprising startups and global capability centres and the world’s largest base for skilled talent.

Singh is confident that if the US ban on visas extends beyond a temporary period, it may lead to more offshoring since there is a lack of local talent available. This is because, he explains, virtually every segment of the American economy, including manufacturing, technology, accounting, medicine, among others, employs skilled workers from other countries for the innovation, productivity, and skill they bring to their companies or for their clients.