Born to be online 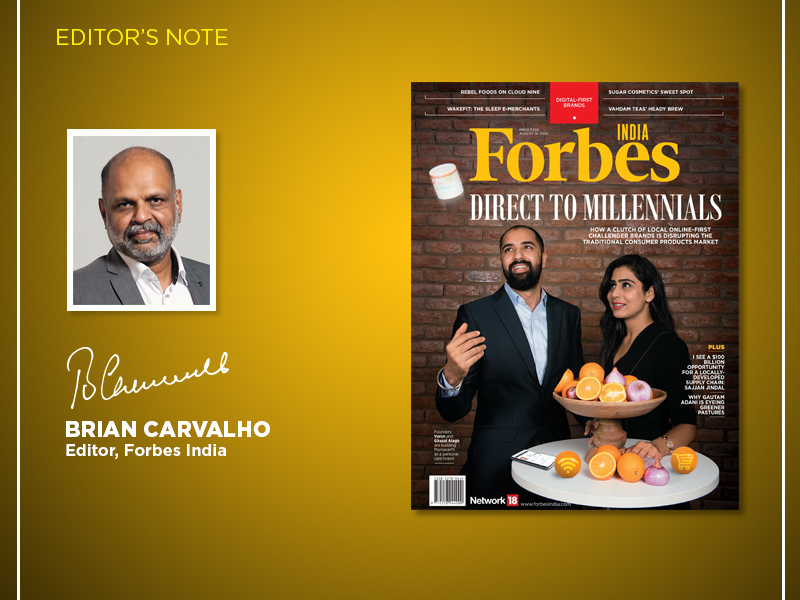 In March 2019, Glossier, known variously as a millennial makeup company, a beauty brand and a direct-to-consumer (DTC) startup, entered the hallowed unicorn club after it scored Series D funding of $100 million in a round led by Sequoia Capital. Within a week, it was the turn of Casper Sleep, an online mattress retailer, to join the league of $1 billion in valuation (although an initial public offering in February 2020 ensured that Casper would lose its unicorn status). Around the same time, DTC luggage brand Away went on to be valued at $1.4 billion after a series D round of $100 million.

DTC brands are born in the digital universe, and hence tend to be popular with the youth. That’s one reason why traditional global consumer product behemoths have been watching these upstarts closely—close enough to eventually make a move on them. In 2016, for instance, Unilever acquired Dollar Shave Club for $1 billion and, a year later, Walmart bought apparel label Bonobos for $310 million.

Digital-first brands also have the capacity to disrupt their traditional counterparts in the brick-and-mortar world, which explains the latter’s willingness to pay top dollar for a Johnnie-come-lately. If Unilever decided to go ahead with Dollar Shave Club, one good reason was that it gave them a contemporary weapon to take on arch-rival Procter& Gamble in the male grooming category that it dominates with the Gillette label (P&G had acquired the shaving giant in the mid-2000s).

Closer home, a number of Dollar Shave Club-inspired startups have taken shape, including Bombay Shaving Company and The Man Company. Others with quirky names like Ustraa (razor in Hindi) and Beardo also started up, making established players like Godrej Consumer and P&G-Gillette sit up and take notice. And, like Unilever, Mumbai-headquartered consumer products maker Marico acquired Beardo to give it a leading edge in the male grooming market.

India has been awash with digital commerce brands over the past decade, but building a digital consumer brand is quite another cup of tea. Quite literally for Vahdam Teas, which is trying something radical—at least in the steeped-in-tradition tea business, where distribution is multi-layered and the supply chain from tea estate to cup is long and arduous enough for the ‘freshness’ that the brand promises to be a casualty.

Now imagine a brand that eliminates the non value-adding middle people and delivers directly to you. That’s the promise of Vahdam along with a clutch of online-first brands Rajiv Singh discovered that has started up recently and raced ahead to grab eyeballs and sales. In an India where smartphones are ubiquitous and data plans are cut-rate, these born-in-the-digital-world brands are able to deliver innovative products, a strong value proposition and a rich customer experience anywhere in India—at the fraction of the cost for traditional brands. And, as Singh points out, recent events have given another short in the arm for these made-in-India labels: A raging pandemic in which digital transformation is as real an imperative as it has ever been, coupled with the rallying call to be ‘vocal-for-local’ to make India less dependent on foreign products and services. Don’t miss this fortnight’s cover package of seven DTC digital-first brands by Rajiv Singh headlined ‘Direct to Consumer’.

Be it in the digital world or the old brick-mortar-and-steel universe, Indian business is keen to display that it can stand on its own feet. Sajjan Jindal, chairman of infrastructure and energy conglomerate JSW, reckons India is staring at a $100 billion opportunity as more and more industries commit to use a locally-sourced and developed supply chain.
Best,
Brian Carvalho
Editor, Forbes India
Email:Brian.Carvalho@nw18.com
Twitter id:@Brianc_Ed

Tweets by @forbes_india
Podcast: How these 100 cr+ digital-first brands are challenging traditional FMCG
CareerNet : Poised to be the largest integrated recruitment provider