As in previous years, Bollywood and cricket rule the list, with 46 actors and 15 cricketers 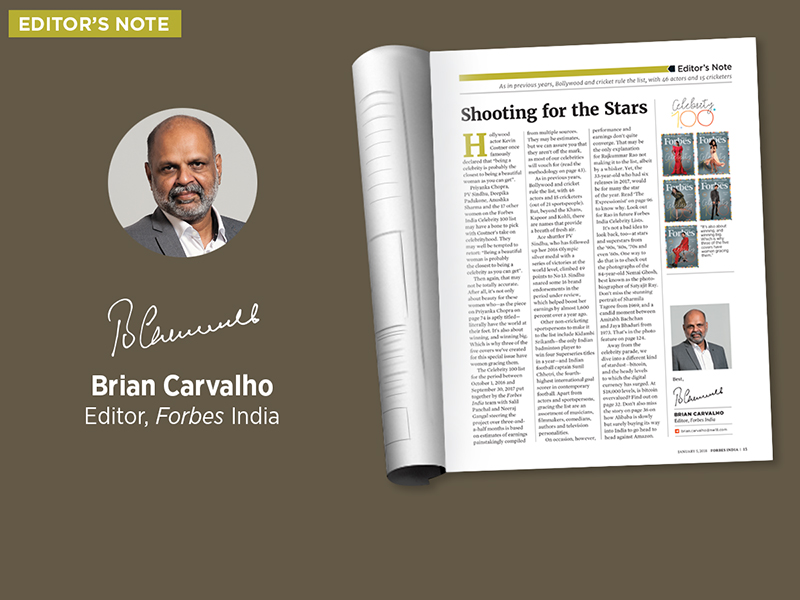 Hollywood actor Kevin Costner once famously declared that “being a celebrity is probably the closest to being a beautiful woman as you can get”.

Priyanka Chopra, PV Sindhu, Deepika Padukone, Anushka Sharma and the 17 other women on the Forbes India Celebrity 100 list may have a bone to pick with Costner’s take on celebrityhood. They may well be tempted to retort: “Being a beautiful woman is probably the closest to being a celebrity as you can get”.

Then again, that may not be totally accurate. After all, it’s not only about beauty for these women who—as the piece on Priyanka Chopra is aptly titled—literally have the world at their feet. It’s also about winning, and winning big. Which is why three of the five covers we’ve created for this special issue have women gracing them.

The Celebrity 100 list for the period between October 1, 2016 and September 30, 2017 put together by the Forbes India team with Salil Panchal and Neeraj Gangal steering the project over three-and-a-half months is based on estimates of earnings painstakingly compiled from multiple sources. They may be estimates, but we can assure you that they aren’t off the mark, as most of our celebrities will vouch for.

As in previous years, Bollywood and cricket rule the list, with 46 actors and 15 cricketers (out of 21 sportspeople). But, beyond the Khans, Kapoor and Kohli, there are names that provide a breath of fresh air.

Ace shuttler PV Sindhu, who has followed up her 2016 Olympic silver medal with a series of victories at the world level, climbed 49 points to No 13. Sindhu snared some 16 brand endorsements in the period under review, which helped boost her earnings by almost 1,600 percent over a year ago.

Other non-cricketing sportspersons to make it to the list include Kidambi Srikanth—the only Indian badminton player to win four Superseries titles in a year—and Indian football captain Sunil Chhetri, the fourth-highest international goal scorer in contemporary football. Apart from actors and sportspersons, gracing the list are an assortment of musicians, filmmakers, comedians, authors and television personalities.

On occasion, however, performance and earnings don’t quite converge. That may be the only explanation for Rajkummar Rao not making it to the list, albeit by a whisker. Yet, the 33-year-old who had six releases in 2017, would be for many the star of the year. Read ‘The Expressionist’ to know why. Look out for Rao in future Forbes India Celebrity Lists.

It’s not a bad idea to look back, too—at stars and superstars from the ’90s, ’80s, ’70s and even ’60s. One way to do that is to check out the photographs of the 84-year-old Nemai Ghosh, best known as the photo-biographer of Satyajit Ray. Don’t miss the stunning portrait of Sharmila Tagore from 1969, and a candid moment between Amitabh Bachchan and Jaya Bhaduri from 1973. That’s in the photo feature.

Away from the celebrity parade, we dive into a different kind of stardust—bitcoin, and the heady levels to which the digital currency has surged. At $18,000 levels, is bitcoin overvalued? Find out on page 32. Don’t also miss the story on page 36 on how Alibaba is slowly but surely buying its way into India to go head to head against Amazon.