Ashok Leyland: From tradition to transition 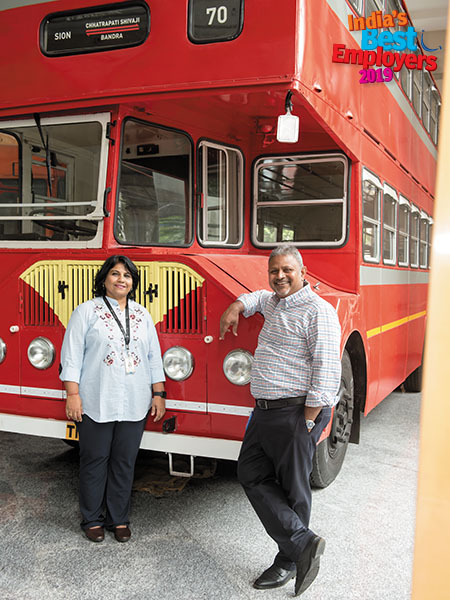 (From left) Uma Rao, head of HR for medium and heavy commercial vehicles, and NV Balachandar, head of HR

The automobile industry is facing two major changes: First, an incremental shift towards more stringent Bharat Stage VI emission norms, and the second, more futuristic, shift is towards electric vehicles (EVs), an area where no company has gone mainstream even in advanced economies.

Given this context, Ashok Leyland has set itself the target of not only becoming one of the top 10 commercial vehicle manufacturers in the world, but also of preparing for the more stringent emission norms that will come into force next year in India.

Managing changes in technology requires different skill sets. For a company such as Ashok Leyland, “from a very established way of making engines to now looking at new norms...[and] be ready by May 2020 is a huge challenge,” says Uma Rao, head of human resources (HR) for medium and heavy commercial vehicles, the company’s flagship unit.

Over the last two years, the HR team has led several communication activities, roping in the managing director and other senior leaders, and held ‘tech fests’ to familiarise people with the new engines and technologies. The team helped identify foreign engine experts and brought them to coach and guide company engineers; they also brought together talented people within the company to work on this transition.

“The emissions from one BS II/III truck will be equivalent to almost ten BS VI trucks,” says Vinay Piparsania, global consulting director at Counterpoint Technology Market Research. “Along with leapfrogging to stage VI engines, India will also need to phase out older vehicles.” In this, multiple stakeholders have to work together to bring about clear government policies and timelines on the availability of cleaner fuel, ‘scrappage’ of older vehicles and adopting global safety standards, Piparsania says. “Ashok Leyland is doing a good job. They’ve stated they’re EV-ready and are already making electric buses, which is the right way to go.”

The HR team set up a mechanism to recognise each milestone with employee engagement. What would have taken 20 years in the old way of doing things is now expected in three years. There was the need to build an environment that is “recognition-filled” to encourage engineers, says Rao.

On the EV technologies front, in the past, hiring had been centred around mechanical engineering and related disciplines. Over the last two years, Ashok Leyland has shifted to hiring people from streams including electronics and electrical engineering and maths, for instance, to work on algorithms for EVs. Internally too, the company seeded programmes in electronics to re-skill a large number of people. More importantly, the EV team was carved out as a separate one.

There are three big-picture trends that have emerged as both opportunities and challenges for large companies such as Ashok Leyland, says NV Balachandar, head of HR. First, there is a lot of trepidation around automation and machine learning (ML) and whether they will replace humans. However, the company is looking to deploy data analytics, artificial intelligence (AI) and ML to complete routine jobs. “The aim is to free up our engineers to do higher-level thinking,” he says.

Second is the need to keep engineers and staff up to date with rapid changes in technology. Here, Ashok Leyland is tapping external experts as well as reputable academic institutions. Third, the company has to manage the combination of a demanding younger generation coming into the workforce along with millennials and older staff who are already part of the workforce. “Bridging these generational gaps and people’s expectations around work-life balance brings its own challenges,” says Balachandar.

The new EV team is an example of how Ashok Leyland is tackling these issues. Unlike the traditional ways of taking pride in ranks and cabin sizes, the EV team has an open office that is much more amenable to collaboration. “We wanted to keep them separate and incubate them like a startup,” says Rao. The team also has direct access to the managing director, who is the sponsor for the EV project.

Tweets by @forbesindia
Glimpses from the 2019 Forbes India 30 Under 30 Soirée
Bayer: Employing a winning habit