Zoho: Busting the myth that great software can only be written in Silicon Valley

With its facility in Tenkasi, Zoho has brought white-collar jobs to rural Tamil Nadu and skilled the local youth 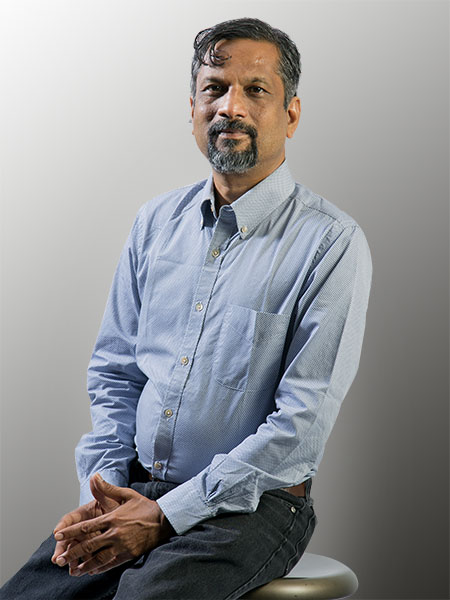 Staying indifferent to external funding, and building Zoho on his own terms has been painstaking, but worth it, says Sridhar Vembu, the company’s founder and CEO
Image: P Ravikumar for forbes India

Mathalamparai in south Tamil Nadu is an unusual choice for a global software development centre. It’s a 12-hour drive from the state capital Chennai and 125 km north of Kerala’s Thiruvananthapuram International Airport (the closest airport). Yet, it is not by chance that Sridhar Vembu, 49, chose the village near the temple town of Tenkasi to set up Zoho Corp’s latest campus in 2011. 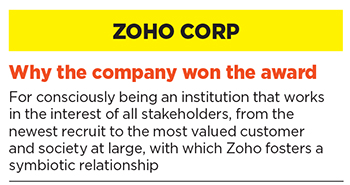 Against the backdrop of the ancient splendour of Tenkasi—known for its five-century-old Kasi Viswanathar temple built by kings of the Pandyan dynasty—Zoho’s roughly 200-member development centre imposes itself as a modern temple of knowledge. It was from here that the company’s lucrative and popular helpdesk software Zoho Desk was built and launched in 2016.

In the process, Zoho has provided a means of livelihood to rural youth, sparing them the ordeal of migrating to large cities, leaving their families behind. “If you look at the smaller towns in India, smart people just have to leave if they want to land good jobs,” says Vembu, the company’s founder and CEO, in a phone interview to Forbes India.

Part of Vembu’s critique of urbanisation is that it comes at crippling costs. “When you build gigantic cities, the cost of infrastructure shoots up. And I don’t mean just absolute costs, but also per capita costs. For instance, building a two-storey house is a lot cheaper than building a 20-storey building, even on a per square feet basis,” he says. “And it’s not just the cost of the building but also the cost of all the surrounding infrastructure. So if one looks at China, and other big economies, it [building urban infrastructure] is carried out with huge debts, which become an overhang on the entire population. I want [people in India] to live in a low-debt economy. That means we have to build smaller, sustainable cities and you have to create high-quality jobs there.”

This conviction is Zoho’s premise and its Tenkasi facility is an affirmation of the same. Many of the employees there are from small towns in Tamil Nadu. Some even shifted base from Chennai so that they could be closer to their families in Madurai or Tirunelveli.

This comes with perks for the employer too. “At Tenkasi, we have zero attrition,” Rakeeb Mohamed Mubeen, product manager for Zoho Desk, who also heads the centre, tells Forbes India over the phone. “One guy opted for a government job and a few women moved to Chennai after they got married but, on the whole, the idea that they can be close to their families is a big draw that helps us retain local recruits.”

Vembu started Zoho in 1996 with brothers Sekar and Kumar, and an acquaintance, Tony Thomas. The three co-founders have moved on to start other ventures on their own but remain investors in the company.

Indifferent to external funding, building Zoho on his own terms has been painstaking, but worth it, says Vembu. The software-as-a-service (Saas) provider has been profitable from the get-go and, with its roughly $400 million (around ₹2,600 crore) annual revenues, it could easily be valued as a multibillion-dollar company. 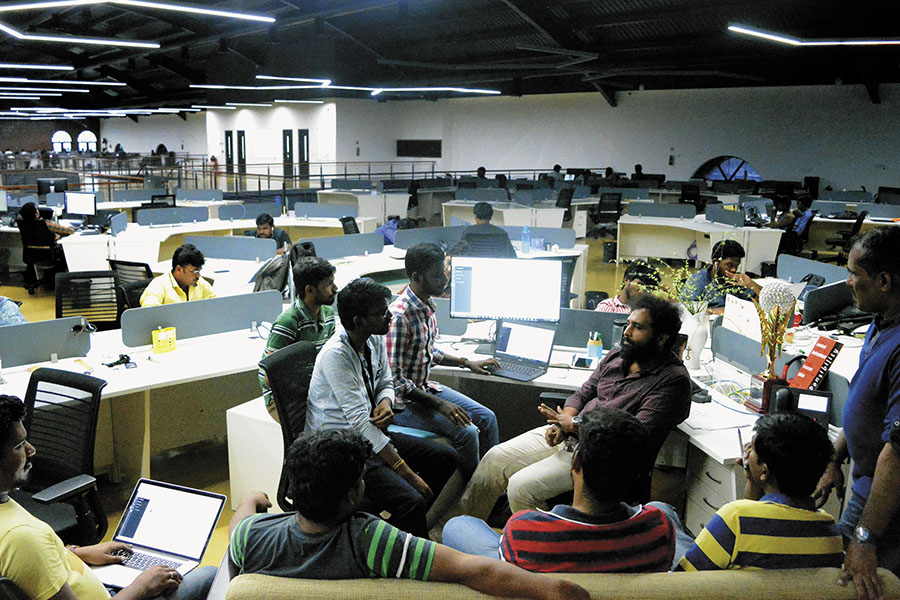 Zoho Corp’s development centre at Tenkasi, Tamil Nadu, is a temple of knowledge, which has given a new lease of life to the rural youth


But what Vembu values more than the valuation is the freedom that Zoho’s staff have to march to their own tune. In business, this is possible only if the entrepreneur does not entertain venture capital or other outside money. The freedom makes it easy to make independent decisions, like the one to build the Tenkasi development centre.

For employees, working at Zoho brings both professional rewards, as they rise in the organisation, and respect from friends and family, who are only a short bus-ride away.

For instance, Mubeen, 37, joined straight out of engineering college some 17 years ago when Zoho, still in its startup avatar, was called AdventNet. When Vembu first aired the idea of building a centre at Tenkasi, Mubeen welcomed it, as it was a chance to work in his home district Tirunelveli, where Tenkasi is located. So, in November 2011, he became part of a six-member team in a rented office in the town.

“We also have the Zoho University on our Tenkasi campus,” says Mubeen. The university, started in 2005 and open only to Zoho recruits, is another testimony to the company’s commitment to “build lasting institutions”, as Vembu puts it. One of its central tenets is to dismantle “academic credentialism”, says Rajendran Dandapani, head of engineering.

He should know, given that he is a dropout from the prestigious Indian Institute of Technology (IIT), Madras, and has been with Zoho since the beginning. Dandapani had scored a high rank in the competitive Joint Entrance test for the IITs, “but my interest in computers overshadowed my electronics curriculum, and I ended up being kicked out of IIT-Madras”. He recalls how, when he was interviewed by Vembu and his younger brother Sekar, his “paper credentials” didn’t matter. “Instead, I designed the first ever website for their startup, and showed them a vocabulary-based game I had written in C++.”

He adds that the company’s recruitment philosophy continues to remain pretty much the same—ignore paper credentials, put the interviewees at ease, don’t test for memory or ability but for good questions, doubts, and for how job aspirants can work in a team.

Another pillar of Zoho’s hiring policy is to “serve the underserved”, as Dandapani puts it. And he’s not referring to affirmative action or reservation. “Don’t add one more offer to a person who has already bagged ten. Instead, try and focus on those in whose lives you can make an immediate positive impact,” he explains.

That means to recruit not just engineers, but also those who are much younger, who come from humble backgrounds but show promise. Some Zoho employees joined the company straight out of class 12 from local government schools, with little knowledge of English. They started out at Zoho University, and have worked their way up to become product managers, team leaders and so on. About 15 percent of Zoho’s 5,000 employees are Zoho University graduates.

From founder to the last employee, those at Zoho consider it a myth that great software can only be written in Silicon Valley. And they believe in passing on the benefits of working in India, where frugality has always been a way of life. “Never pay your landlord exorbitantly, instead channel that [the money saved] into three meals a day for your employees,” says Dandapani.

In Tenkasi town, two- and three-bedroom flats are available for a monthly rent of a few thousand rupees, points out Mubeen. Some employees even team up and share an apartment, making it all the more cost effective. And the pleasant commute to work, with paddy fields, hills and even waterfalls along the way, is an added perk.

The cost benefits are passed on to customers. “We don’t nickel-and-dime them for our software,” says Dandapani. The idea is to always pass on the benefits of cloud software to the end users. And a thumb rule at Zoho is that one must not write code that prevents certain users from accessing some features, just because they didn’t enrol in some expensive subscription plan.

“Zoho often focuses on making things easier for its customers. The Zoho One platform, for instance, provides customers all the tools they need at one price point, making it unnecessary to purchase multiple applications,” Alan Lepofsky, VP and principal analyst, Future of Work, at tech advisory Constellation Research, tells Forbes India in an email interview. “Choosing a vendor goes beyond just their products; customers want to be associated with a company that matches their culture. Programmes like Zoho University show the human side of the company, while at the same time, this seeds future users of Zoho software,” he adds.

Perhaps the biggest evidence of Vembu’s efforts to build something larger than a company, or even a lasting company, is Zoho’s contribution to creating an ecosystem for software engineering and talent around Chennai. The most striking example is Freshworks, previously called Freshdesk, started by Girish Mathrubootham, who rose to head Zoho’s largest division—Manage Engine that develops IT management software—before leaving to start his own venture.

Today, Freshworks—the first Indian startup to attract Google’s Capital G as an investor—is not far from becoming a unicorn. Like Zoho, Freshworks is incorporated in California, but Chennai serves as the base of most of its operations, which has helped expand the talent base and the local software startup ecosystem.

Freshworks employees, in turn, have gone on to start their own successful ventures. Among them are Bengaluru’s Voonik, an ecommerce company focussed on women’s fashion, and Zarget, which helps customers make rapid adjustments to their online ads and marketing, based on advanced data analytics. Zarget’s software allows customers to do this in a user-friendly manner, with no knowledge of coding required. Zarget showed such promise that Mathrubootham, an early investor in the company, decided to acquire it altogether. The deal was announced a few months ago, just two years after Zarget started.

Parakrama Pandyan, the 16th century Pandyan king who commissioned the construction of the Kasi Viswanathar temple, was inspired by a vision to bring prosperity to the local community. Vembu, a self-professed Buddhist, sees himself as no king. Yet, the new Zoho campus, with its rural setting, leaves no doubt that an engine of growth has kicked off one more modern experiment in bringing prosperity to many. And it is only getting started.

(This story appears in the 24 November, 2017 issue of Forbes India. To visit our Archives, click here.)

Tweets by @forbesindia
Ten interesting things that we read this week
Build human capital or buy it?