To help us steer through this crisis, expert shares insights on entrepreneurial decision-making and offers four strategies seasoned founders use to turn uncertainty into opportunity 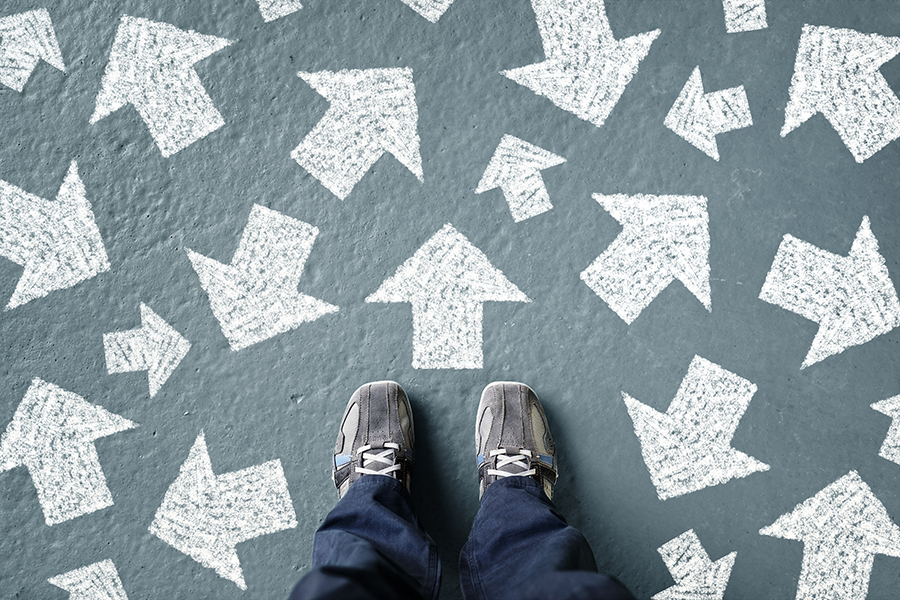 Covid-19 continues to spread. As the human toll surges, so does the economic damage. And there is no way to know for sure when it will end and what the fallout will be. According to the World Pandemic Uncertainty Index (WPUI), a new measure of economic uncertainty related to disease outbreaks developed by the International Monetary Fund, global uncertainty around the novel coronavirus is at a record high — much higher than in past outbreaks, such as SARS and Ebola.1

How can we tackle this rising uncertainty? Darden Professor Saras Sarasvathy, an authority on high-performance entrepreneurship, suggests that we take our cue from expert entrepreneurs, who believe that although the future is unpredictable it can be controlled through human actions. “The most important thing,” says Sarasvathy, “is to see this moment as an opportunity to shape a better future for ourselves and others. In a time like this, when things drastically change, everyone has to be an entrepreneur.”

What it means, according to Sarasvathy, is that we have to act. “We can run for office,” says Sarasvathy. “We can change institutions. COVID-19 happened to us. Ask yourself, ‘What do I want to happen next? What can I do now that I couldn’t do before the pandemic?’”

To help us steer through this crisis, Sarasvathy shares insights on entrepreneurial decision-making and offers four strategies seasoned founders use to turn uncertainty into opportunity.

Masters of Uncertainty: Learning from Expert Entrepreneurs
Uncertainty refers to a lack of knowledge about the outcome of future events. The startup phase of a new venture is steeped in uncertainty; founders operate in a volatile environment, facing chaos and contingencies more frequently than the rest of us. “Uncertainty,” says Sarasvathy, “exists with any new product, market or technology. Handling uncertainty is at the very core of how entrepreneurs are able to create wealth.”

Twenty years ago, Sarasvathy set out to study the thought processes of successful entrepreneurs. She discovered a repertoire of methods and techniques that they use to make effective decisions under extreme uncertainty inherent in new venture creation. “They learned those methods the hard way,” says Sarasvathy, “through the school of hard knocks. Now we can learn from them.”

Those two main approaches and their combinations that differ in their emphasis on prediction and control, give entrepreneurs four strate gies, as illustrated in a framework below. Sarasvathy calls them predictive, visionary, adaptive and effectual. 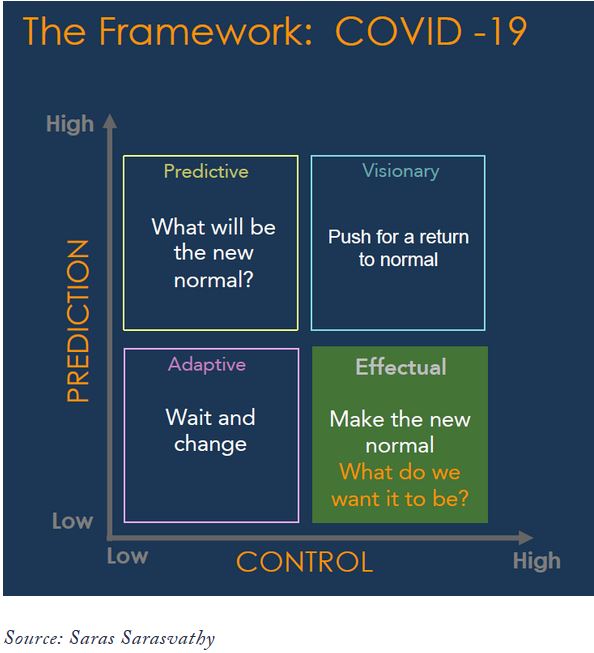 According to Sarasvathy, prediction and control have different roles at different stages of the entrepreneurial process. All entrepreneurs have to learn to navigate the prediction-control space using all four toolboxes, but expert entrepreneurs excel at matching them to different environments and situations.
The Predictive Approach

This approach is based on the assumption that the changing environment can’t be controlled but can be predicted. Accordingly, firms that predict more accurately the environment in which they operate will find the optimal course of action and outperform the competition. “We’ve developed all those predictive tools,” says Sarasvathy, “like big data analytics, to predict better. Because if you can predict better, at least in principle, you can control the outcomes.”

According to Sarasvathy, prediction can be effective in a mature, stable environment, in which data is reliable enough to support decision-making.

The Visionary Approach
Entrepreneurs who take this approach assume that the environment is both predictable and malleable. They imagine future possibilities, commit to a clear vision and goals, and act to make them happen, tenaciously shaping the environment to achieve the desired outcomes.  If something unexpected happens along the way, they fight to overcome it so they can get back to building their original vision. According to Sarasvathy, a visionary entrepreneur says, “I know where the future is headed and I have all the resources within my control to achieve my vision. Or I will convince those who have them to give them to me.”

This approach can be effective when a company has market power and tries to impose its vision on the environment and dominate it.

This approach minimizes the use of both prediction and control. It assumes that in a changing environment, it’s more effective to learn, experiment, iterate and move quickly to capture new opportunities, out-maneuvering the competition.3 As Sarasvathy puts it, an adaptive entrepreneur says, “I don’t know where the future is headed. I don’t have any resources. But I’ll be adaptive, responsive, resilient, persistent, quick and nimble. When things change, I’ll change, too, and that’s how I’ll make it.”

“One way to mitigate uncertainty is through action. You can transform uncertainty into opportunity by shaping and co-creating your environment with others who self-select to work with you."  Professor Saras Sarasvathy

3 The Effectual Approach
Novice entrepreneurs often rely on predictive strategies they learn in business school. However, as they develop expertise in starting new ventures, their decision-making changes, says Sarasvathy. They realize that the most effective way to mitigate uncertainty involves nonpredictive control.

According to Sarasvathy, expert entrepreneurs use methods and techniques that minimize or eliminate reliance on prediction and instead allow them to control the future environment and outcomes. Those methods, and the underlying decision-making logic, is what Sarasvathy calls effectuation.

Expert entrepreneurs often don’t have clear goals; instead, they start by working with what’s already within their control — their available means — and let goals gradually emerge as more stakeholders commit their resources to the emerging venture. Because a startup has no market power, a buy-in from the stakeholders who choose to work with a founder is critical.

As Sarasvathy puts it, an expert entrepreneur says, “I don’t need to predict the future. Instead, I’m going to influence and shape it. In some cases, I will actually create it. But I’ll co-create it with partners, customers, suppliers and other self-selected stakeholders. I will work with whoever is willing to work with me.”

Start Now, With What You Have
The COVID-19 pandemic is a true “black swan” — an unpredictable random event with an unprecedented human toll. It has drastically altered the environment in which we live and work. As we struggle with the challenge of an uncertain future, we can try to predict what the new normal will be; we can wait and adapt to it; or we can push for a return to normal, as illustrated in the framework.

Or, we can actively shape and create the new normal. “Entrepreneurs believe that what you do matters,” says Sarasvathy, “and if you don’t do anything, nothing is going to change. So when things don’t go well, there’s even more urgency to act.”

If you’re unsure what to do, be effectual and start with your means — who you are, what you know and whom you know — what Sarasvathy calls the Bird-In-Hand Principle. “Ask yourself,” says Sarasvathy, “‘What are the things that I control today? What kinds of goals can I achieve with the things that I already have?’”

Whether we’re planning to launch a business, start a food bank, or run for office, there’s a lot we can learn from Sarasvathy’s research. “Key findings about expert entrepreneurs,” says Sarasvathy, “are especially relevant today because the world is facing this sudden, widespread uncertainty. And effectual logic seems to be the most effective way to handle it.”

With uncertainty rising sharply around the world, effectuation may become more than a toolbox founders use to shore up their fledgling ventures. It may become a way of life.

This article was developed with the support of Darden’s Batten Institute, at which Gosia Glinska is associate director of research impact.

Tweets by @forbesindia
Timeline: One year in Kashmir Valley, since the Article 370 abrogation
Vahdam Teas: Can the online tea empire replicate its success at home?