How Rebel Foods found a silver lining in cloud kitchens, and is churning out a battery of ₹100-crore online-only food brands 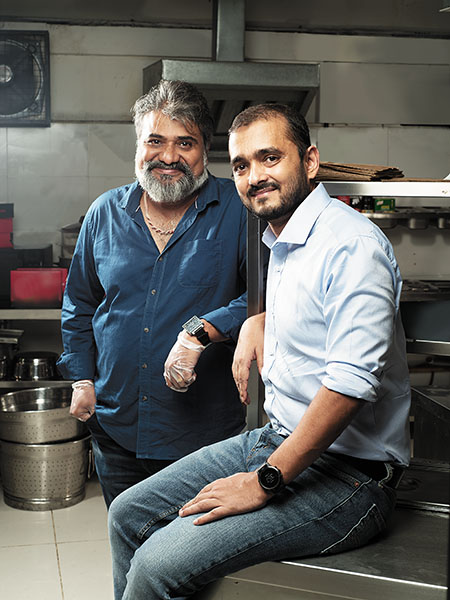 In 2003, the then 28-year-old Jaydeep Barman was into his second job at an e-learning company. He used to frequently travel abroad for work and had no complaints with life. Except one. Barman missed Bengali food, especially the ubiquitous egg rolls of Kolkata. “I started a small roll joint in Pune,” recalls Barman, who along with his colleague Kallol Banerjee, rolled out Faasos.

Two years later, Barman left for France to pursue his MBA. Banerjee joined him in 2006. The single outlet in Pune was now on auto-pilot; the duo hired two people to run the store. The passion project stayed alive.

Five years later, they were  back in India. Faasos by then was profitable—profitable enough for the friends to make the call to take the brand pan-India.

In five years, Faasos made steady progress. Revenues jumped from ₹4 crore in fiscal 2012 to ₹62 crore in four years; the brand expanded to three cities and opened 40 outlets. The top line growth, though, was eclipsed by a bleeding bottom line. Losses leapfrogged from ₹2 crore to ₹105 crore during the same period. Barman had made a brand out of rolls, but the business was haemorrhaging.

Hurting most were the exorbitant rentals on high street. Even a 100 square feet outlet in Kalina, Mumbai, had a monthly rent of ₹1 lakh. In fact, the monthly sales of some of the outlets just about covered up the rent. Barman decides to shut all stores, and shift to cloud kitchens, changing the business model to delivery-only.

Barman’s rather shift appeared radical—at least to many around him—but his conviction was backed by consumer insight. A study commissioned by Faasos revealed that 73 percent of consumers surveyed admitted that they had never seen a Faasos store. “This was a lightbulb moment,” says Barman. For a brand which was getting over 75 percent of sales from delivery, the need to have a physical store seemed obsolete. Barman opened 50 cloud kitchens in four cities in 2016.

The gambit seems to have paid off. Revenues pole-vaulted to ₹561 crore in fiscal 2020; losses have stabilised; burn per month dipped from ₹10-12 crore last year to ₹4-5 crore; and the company expanded to 35 cities with 320 cloud kitchens. The most startling achievement, though, is transformation of Faasos from a roll-only brand to a food company that has used technology to churn out multiple brands from the same kitchen. Two of them have crossed the ₹100 crore mark in four years (see ‘Three Big Boys of Rebel). 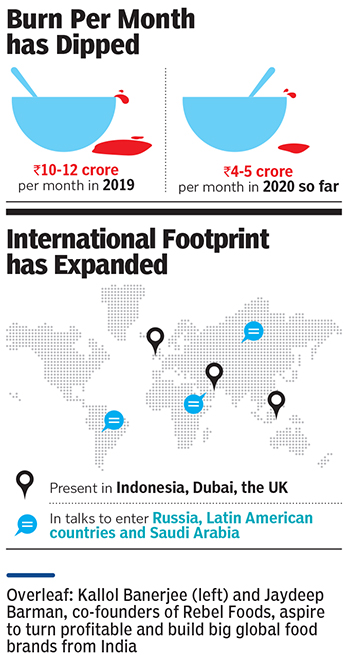 Barman shares the success mantra: You make abnormal returns only when you do something abnormal. “It’s good to be crazy,” he says. It’s great, he lets on, if people don’t agree with your ideas. “It means they won’t copy you,” he smiles. Living up to ‘being crazy’, Barman changed the name of Faasos to Rebel Foods in 2018.

Going against the normal has been a striking trait of Barman’s entrepreneurial journey. Take, for instance, the move to roll out a biryani or a pizza brand. Barman experimented first with pizzas by rolling them out under the brand name of Faasos. The move flopped. Faasos was known for rolls, and consumers didn’t associate pizza with Faasos. Undeterred, Barman changed the name of the pizza brand to ‘Early Trails’. The product remained the same, and was being churned out from the same cloud kitchen. What changed was consumer behaviour. “People started buying Early Trails,” he recalls. The biggest takeaway, he lets on, was that there can’t be a multi-cuisine brand. McDonald’s is for burger, Starbucks is for coffee, and Domino’s is for pizza. “Faasos has to stand for only one thing,” he adds.

The learning was quick. But Barman again did something weird. He killed Early Trails, and rolled out a biryani brand Behrouz. Reason: Barman wanted to disrupt two food categories. The first one was popular food, with massive headroom for growth and no pan-India player. Second was a food category where there was a monopoly. Pizza, he explains, fell into the second category and was lorded by Domino’s and Pizza Hut. “Taking them head-on would have hurt me at that time,” he recounts. So, the default option was biryani. Launched in 2016, Behrouz clocked a revenue of ₹146 crore in the March-ended fiscal 2020.

In 2017, Barman went back to pizza. After expanding to 10 cities with 100 cloud kitchens, Barman was in a better position to take on Domino’s and the likes. So Oven Story, the pizza brand, was launched towards the end of 2017. The move again paid off. In three years, it has clocked ₹105 crore, and has become the third biggest brand from the stable of Rebel Foods. Barman attributes the success to listening to customer insight. In yet another study, consumers were asked to name the first thing that came to their mind after hearing pizza. Some 60 percent said cheese. No pizza brand, reckons Barman, was talking about cheese. “We launched four variants, and owned the space,” he says.

Buoyed by the success of Behrouz and Oven Story, Barman has rolled out a battery of other food brands, and all of them have managed to scale at a fast clip. Take, for instance, coffee brand Slay. Launched late last year, the brand was scaled to 100 locations in six months. Barman shares the untold story about Slay. “It was not started by Rebel,” he says. The brand was owned by an entrepreneur in Bengaluru, who had one store, and was clocking sales of ₹1 lakh per month. Barman invested in the brand, bought a 70 percent stake, and increased the revenue to ₹80 lakh per month. The experiment worked. “This is our next disruption. We have scale, and we are looking for exciting food brands,” he says. The company rolled out ‘Rebel Launchers’ a few months ago to spot passionate food entrepreneurs and bring them under its fold, or cloud.

Cloud kitchens, reckon food analysts, changed the game for Rebel Foods. They altered the store economics of a restaurant by reducing capital investments, taking away prime real estate costs and expensive service staff. A combination of this model with lower break-evens and change in the consumer environment enabled Rebel to scale up quickly and build brands. “This required a fresh approach and shattering existing models which Rebel Foods has demonstrated and delivered,” says KS Narayanan, food and beverage expert.

Commenting on the trend of building an online-only food brand, Narayanan reckons that consumers place trust in a brand based on what it has to offer, both in terms of product attributes and emotional comfort. “Building a food service brand is quite a challenging task with millions of moments of truth,” he says. To be a successful and scalable restaurant and food service format requires a good combination of art, craft and science in equally good measure, he adds. Barman gets a thumbs up from his backers as well. “They have done a fantastic job,” says Prashant Mehta, partner at Lightbox. Churning out multiple brands, scaling them across the country, and maintaining high quality and consistency are some things that nobody can replicate. Rebel Foods, he adds, is a technology-led food company. Anybody can start a cloud kitchen, but they can’t scale and do what Rebel has done, he says. Rebel Foods is using the franchisee model to expand its global footprint.

Barman, for his part, has married technology with food. Take, for instance, the visual artificial intelligence quality control machine used in the cloud kitchens. It can detect size, weight, appearance and temperature for each prepared dish, and can reject or accept based on the extent of deviation from ideal. Then there is a robotics-led smart fryer, which gets adjusted automatically for the oil temp, dipping and releasing based on what is being fried.

Another interesting technology is QR Code. Consumers, informs Barman, can scan the code on packaging or invoices and check everything from who cooked the food, body temperature of the cook and medical certificates (see ‘Food and Tech’). Technology adoption doesn’t stop inside the kitchen. Early this month, the company posted job openings for electronics and mechatronics engineers, data and robotics professionals, and industrial designers. “Food is half passion, half science,” he laughs.

The big challenge for Rebel Foods is to ensure that losses don’t pile up as it goes on an expansion spree in India and globally. Barman is aware of the big ask. “Every kitchen is profitable, which means unit economics is in good place,” he says, adding that he would definitely look at turning profitable. The aspiration now is to build big global food brands from India. “It might sound crazy. But this is what keeps me going: Doing things that others don’t agree with or give me a chance,” he says. After all, this is what rebels are made of.