Founding partners Madhukar Sinha and Anand Lunia are now raising their fourth fund to invest in Indian startups, having backed a handful of winners whose potential was not so apparent to many early on 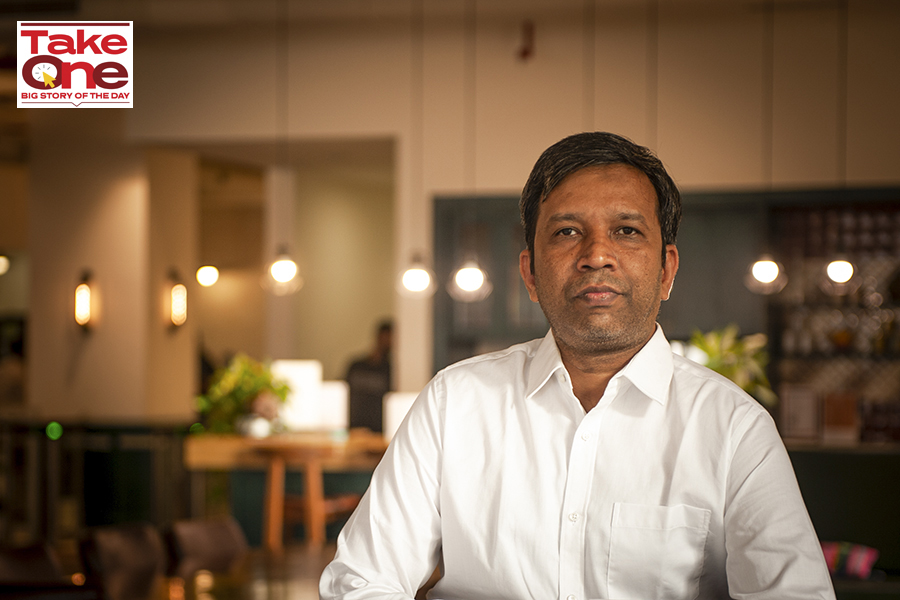 Vellvette Lifestyle, founded in 2012, took its time making a mark, after raising seed funding of about Rs. 1.5 crore from venture capital firm India Quotient, which was raising its own first fund. The Mumbai company did not go far with its initial plan of selling curated make-up and personal care products from well-known brands on a subscription basis. By 2015, Vellvette’s co-founders, wife and husband Vineeta Singh and Kaushik Mukherjee, changed tack and decided to make their own brand of cosmetics — SUGAR. Some investors did not believe it would work. The subscription-based ecommerce venture was something they were comfortable with, whereas, back then, a digital-led Indian consumer brand was “non-fundable,” Singh recalled in a recent interview with Forbes India.

“A couple of angel investors exited at the very next round of funding, but India Quotient continued to back us,” she says. Founding partners Madhukar Sinha and Anand Lunia’s belief in the entrepreneurs is seeing the kind of returns that VCs bet on. In February, Sugar Cosmetics announced a new round of funding, at $21 million, and in the process boosted its value to about $100 million. Despite the pandemic, Singh, also the CEO, expects physical retail to be a big distribution channel for the digital-led company and she plans to go from being present in 10,000 stores today to 40,000 stores. India Quotient’s first investment in Vellvette is now valued at nearly 50 times over, based on a part exit in February. “Sugar Cosmetics was a late bloomer among our portfolio companies from our first fund, which is doing extremely well,” Sinha, co-founder of India Quotient, said in a recent interview with Forbes India. “And that is our big winner from the first fund.” VC firms bank on one or two companies at best to return their entire fund many times over. “Sugar Cosmetics is that company in our fund I,” Sinha said. “We invested early in them and we just sold some equity in the company to return most of our first fund, and we are still sitting on a lot of unrealised gains.” Lunia and Sinha started India Quotient in 2012, to test out their hypothesis that internet-led ventures could be the next big thing. They aimed to raise about Rs25 crore but exceeded that a bit to end with about Rs31 crore. Their timing made them perhaps the third full-time VC investors in early-stage startups in India after Blume Ventures and Kae Capital, which had both started in 2010. The partners made 21 investments from that fund, and in the 2014-15 internet startup boom in India, their portfolio companies saw several markups, with follow-on larger rounds that drew investors such as Sequoia Capital and Tiger Global. Of course, most of the companies did not survive for the longer haul, but the markups showed that they were onto something. The experience also helped India Quotient raise its second fund—Rs. 109 crore this time, in 2015. They would invest very early and typically take 10-12 percent equity stakes in the startups. While Sugar Cosmetics was the big winner among the investments from the first fund, others include Lendingkart, an online lender, and Highorbit Careers, which operated a jobs portal iimjobs.com, and which was acquired by Info Edge in 2019. The ShareChat Bet The second fund was an exercise in narrowing down the focus from internet in general to mobile internet and on to app-driven businesses. And one of the first companies India Quotient invested in, on the basis of this sharpened focus, was ShareChat, an Indian local-language social media company. India Quotient’s first investment in the company was Rs. 50 lakh. A small partial exit from ShareChat in 2018 helped the VC firm to be “very well placed” on returns from its second fund. By that time, already, India Quotient’s initial investment, made in October 2015, had grown over 500 times in value (See table). 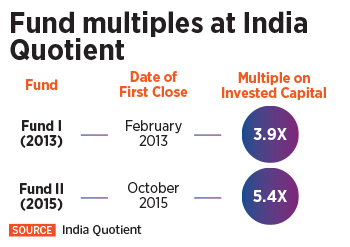 On returns, Sinha says the metric of ‘internal rate of return’ is an inferior one compared with the number of times a VC firm is able to multiply the investors’ money. “We are in the business of multiplying wealth,” he says. On that front, money from the first fund has probably multiplied five times, and fund three, which is yet to even be fully deployed, is marked up by 1.8-1.9 times based on subsequent rounds of investments that have brought in other investors. The real value of a portfolio of investments becomes visible only after the portfolio is four or five years old, Sinha says. The initial two or three rounds of funding aren’t enough to peg a company’s real worth or the chances that it will succeed or fail. “So we are all trying to throw darts. The next guy is equally blind and everyone believes that they are throwing the right darts,” Sinha explains. Some things have changed though. Ten years ago, entrepreneurs used to be in their mid-thirties, with some ideas, financially more secure, but not too ambitious. Discussions would be around businesses that could grow to a couple of hundred crore. And the salaries of the founders, team building, which rights to negotiate and so on. “Binny Bansal and Sachin Bansal changed everything,” Sinha says, especially, when their ecommerce venture Flipkart hit a billion dollars in valuation. That pushed a lot of engineering graduates from India’s prestigious Institutes of Technology to think about starting up, and of course the worry that a batch mate could go and start something that could become a billion-dollar business and “I would be earning half a million dollars at a consultancy and nobody is writing about me”, he adds. “We started seeing young entrepreneurs with no fear, talking about tech, about billion-dollar businesses.” One of these new-breed of entrepreneurs, for example, was paying himself only Rs. 15,000 in salary and was at work at all hours, making life really tense for his team, some of whom actually complained to Sinha about it. “I think we are entering into the golden phase of the startup ecosystem in India. I think India today resembles more like what China was ten years ago,” Sinha says. In a coming few years, he believes, there will be many large companies built in India. “We are very excited about the next decade or so for India.”​