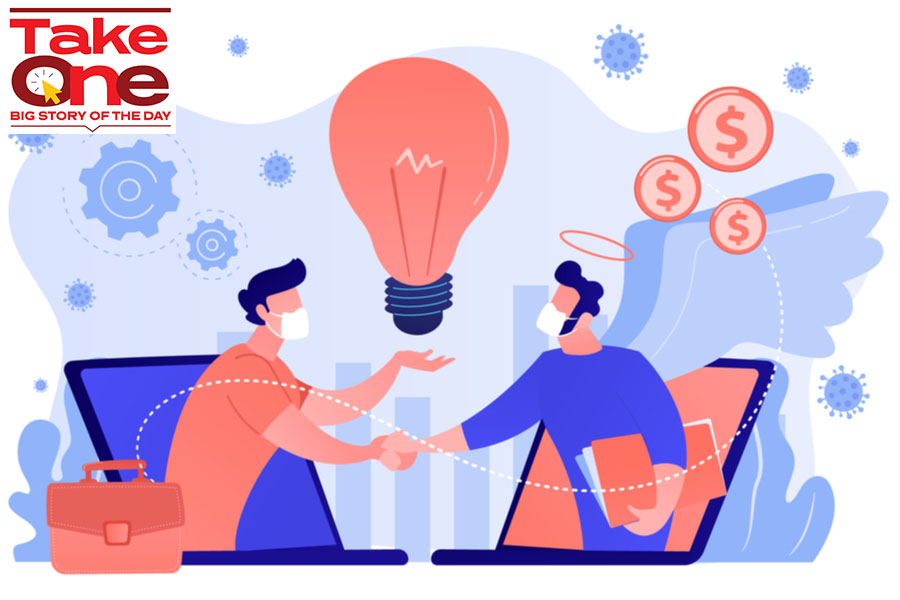 January 10, 2020. New York-based Tiger Global Management pumps in $200 million in edtech major Byju’s, valuing the startup at $8 billion. “Byju’s is pioneering technology [which is] shaping the future of learning for millions of school students in India,” Tiger Global reportedly said in a media statement. Before this round, the Bengaluru-based unicorn had reportedly raised about $971 million from a clutch of marquee investors such as Naspers and General Atlantic.

Twenty days later, on January 30, India reported the first confirmed case of Covid-19. After two months, as the pandemic started to batter the country, India went under strict lockdown. This meant two things. One, a new normal would emerge, which would revolve around a digital way of life. Two, the future on many fronts was set to get recalibrated, including the future of learning, consumption and transacting.   Cut to 2021. Towards the end of March, a much stronger second Covid-19 wave has rung alarm bells across the country. Just two days before the end of the month, Byju’s raises $460 million as part of its series F round, which propels the company’s valuation to over $13 billion. Byju Raveendran, founder of the second-most valued startup in India after Paytm, puts the stratospheric number in perspective. “We firmly believe that valuation is a by-product of actual value creation,” he says. “For us, it’s not about making billions but about impacting the way billions of students across the world learn.” The excitement within the investor community, Raveendran stresses, is due to the impact the sector has created during the pandemic, along with recognising the need and demand for online learning. 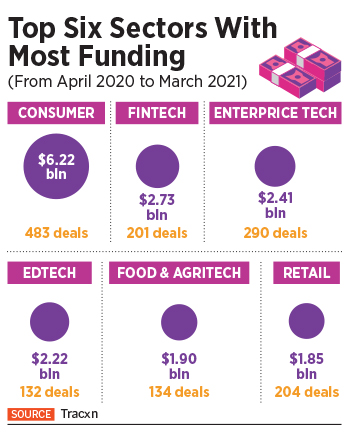 The excitement among the funders indeed is about the impact. The pandemic has made online learning a new reality. Unsurprisingly, funders have generously opened their purse strings to reward the highest performing edtech student. Look at the funding rounds in Byju’s since January 2020: The first one happened in June, and the amount reportedly was $100 million; the next one—of $122 million—came after two months; in September, the round bloated to $500 million, and after five months, in March this year, the edtech major grabbed another $460 million. In all likelihood, the funding tap will stay on for Byju’s over the next two years.  Byju’s is not the only digital player to see a flurry of investments. The pandemic has opened the floodgates for sectors that have made the most of its tailwinds. Take, for instance, Mobile Premier League (MPL). The online gaming startup reportedly raised $100 million in February this year. Out of a total of around $225 million raised by MPL since 2018, $190 million came in during two rounds—one last year and the latest in February.  Sai Srinivas, co-founder and chief executive officer of MPL, explains the method behind the funding madness. Esports and mobile gaming is a sunrise sector. The pandemic and subsequent lockdowns gave a huge fillip to the already booming segment. “With the growth trajectory this sector is witnessing, more funding is expected,” he reckons. “Investments will continue to pour in.” Funding has indeed continued to pour in during the first quarter of this year as well. Early this month, social commerce platform Meesho raised $300 million in a round led by SoftBank Vision Fund 2. The investment, which valued Meesho at $2.1 billion, saw participation from existing investors such as Prosus Ventures, Facebook, Shunwei Capital, Venture Highway and Knollwood Investment. Industry experts are not surprised. Irrespective of the first wave of Covid or the second, they contend, venture capitalists (VCs) will keep pumping money into sectors that have blossomed during the pandemic: Edtech, online grocery, consumer tech, and social commerce. The more the pandemic rages, and the more the country goes into lockdowns in various forms, the more it will reinforce the value of startups that have digital origins. Look at the top sectors that cornered most of the funding between April 2020 and March 2021. The consumer segment tops the chart with $6.22 billion, followed by fintech, enterprise tech, edtech and food and agritech.  Abhishek Goyal explains why the startup segment is flush with funds. During lockdowns across the world, governments provided stimuli to their economies, which coincided with low rates of interest. “This has significantly increased the amount of money present in public markets and for startups,” reckons the co-founder of Tracxn, a market intelligence platform for tracking startups and companies. “This [funding frenzy] is expected to last for another two years.” While the sectors that got negatively impacted have seen almost negligible funding, like co-working spaces, sectors that are on the other side saw a very steep increase in availability of capital.

Making sense of the hectic funding activity is also about realising the nature of VC investments. “It’s all about betting big on segments that have been promising,” says Anil Kumar, chief operating officer of home-grown consulting firm RedSeer. VC investments, he explains, are not instant noodles. The investment follows a pattern, which is looking for early winners in the sectors that are poised to do well. And the best are made quite early. Take, for instance, edtech and foodtech. It’s not that funding was missing in these segments before the outbreak of the pandemic. What the pandemic, though, has done is to accelerate the rate of investments. “Most of the investments are made on the basis of a five-year horizon,” he says. Pandemic, lockdown, and the subsequent tailwinds for digital and online-centric startups were only collateral benefits. The waves of Covid, he stresses, won’t define the quantum of investments. VCs, he lets on, have already identified a few promising sectors for the future, and the pace of growth will only gather steam.  Take, for instance, social commerce, which is estimated to be a $1.5 billion-$2 billion GMV (gross merchandise value) market today. It is set to surge to $16 billion-$20 billion in five years, and will likely hit $60 billion-$70 billion by 2030, according to a report by Bain & Company. Titled ‘The future of Commerce in India’, the report maintains that India’s ecommerce sector traditionally has been dominated by a few large players. Social commerce, though, is paving the way for a more distributed model that’s built on community, connection and trust. “While traditional ecommerce will continue to grow, social-led models will help redefine the landscape over the next five to 10 years,” the report maintains.  The pandemic, and the subsequent change in consumer habits, has led to a sharp uptick in digital consumption among Indians, making sectors like social commerce a darling of investors. Digitally connected Indians, the report released last December highlights, spend an average of 3 hours per day online, of which more than 2 hours are consumed by messaging, social media networking and watching videos. “Millions of small retailers are finding innovative ways to sell directly to consumers through a variety of social formats, ranging from conversational commerce on chat platforms to video-led commerce to a vibrant social reseller community,” the report points out.   No wonder, entrepreneurs and investors are bullish on this segment. “In the last one year, we have seen tremendous growth across small businesses and entrepreneurs seeking to move their businesses online,” Vidit Aatrey, founder and CEO of Meesho, reportedly said in the media release after the funding announcement early this month. The target for Meesho, he added, was to enable 100 million small businesses go online.  As millions and billions are set to keep pouring into the startup ecosystem in India, one thing is for certain: The pandemic has whetted investors’ appetite. “While funding will stay endemic for a few segments, others too—like food delivery—will soon join the party,” says Kumar of RedSeer. The fundemic has just begun.

Tweets by @forbesindia
My life in Israel's brave new post-pandemic future
Indian samurai: A founder and his fight to find an investor