A current rage on Nasdaq, they offer a quicker way for new-age Indian companies to list in the US markets, tap fresh investors, and raise capital 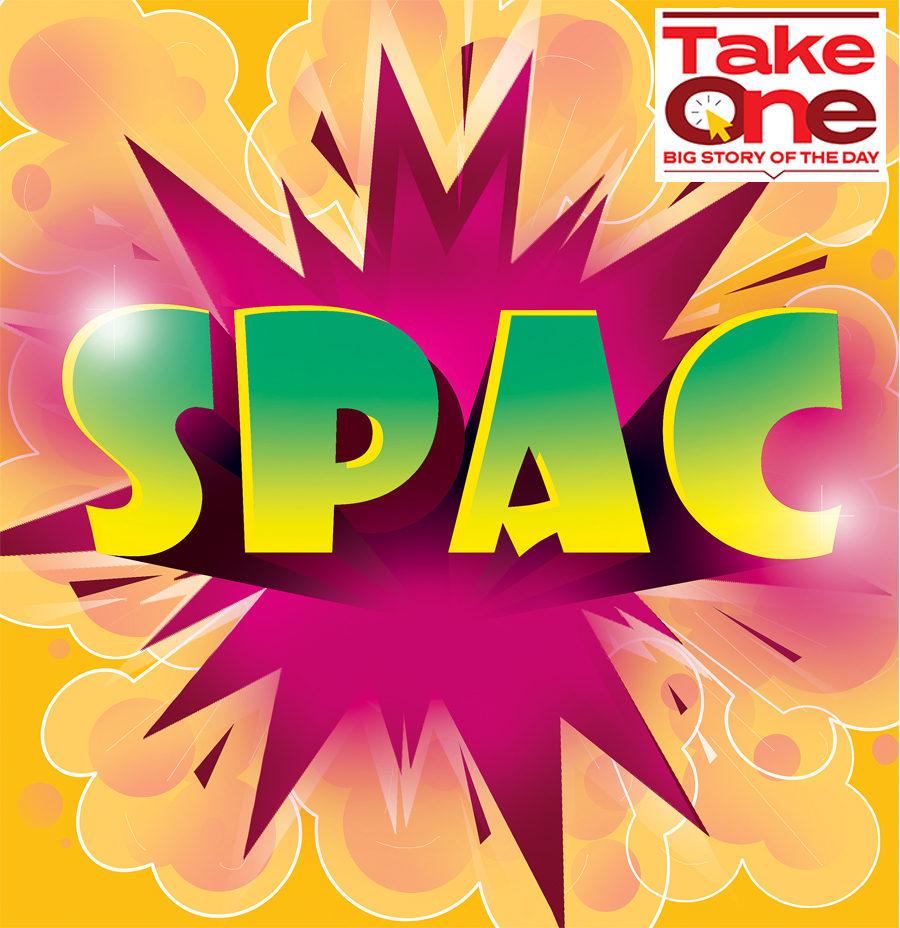 In July 2018, India’s largest renewable energy company ReNew Power received the market regulator’s approval to raise money from Indian capital markets. The much anticipated share sale never took off, as the company’s ask of nearly $4 billion valuation is something that public investors did not warm up to. After all, two months before filing its draft prospectus with Securities and Exchange Board of India (Sebi) in May 2018, ReNew had raised Rs 1,608 crore from Canada Pension Plan Investment Board at Rs 415 per share at a valuation of nearly $2.3 billion, a significant premium to what Goldman Sachs had paid in 2016 when it did a follow-up round at Rs 205 per share. ReNew’s largest shareholder is Goldman Sachs, which owns 48.6 percent in the company. Japanese power company Jera had paid Rs 375.28 per share in March 2017.  Things have changed since then. In February 2021, ReNew Power announced that it is listing on the Nasdaq by reverse merging with a special purpose acquisition company (SPAC). A SPAC is a blank-cheque company or a shell company that lists through an initial public offering (IPO) and is registered with the US Securities and Exchange Commission (SEC).

In this case, RMG Acquisition Corp II (RMGB), which listed on Nasdaq in December 2020 by raising $345 million, has offered to acquire ReNew Power. During this process, ReNew Power will merge with RMGB and create a combined entity called ReNew Energy Global Plc, which will be listed and traded under a new symbol, RNW. When a combined business transaction is finally completed, which includes shareholder approval and financing among other things, it is called a de-SPAC transaction. RMGB is sponsored by Riverside Management Group and during its listing it had offered to acquire companies across sectors. Till date Riverside Management Group has floated three SPACs. RMG Acquisition I has bought Romeo Power, a company focussed on designing and manufacturing lithium-ion batteries. RMGB has offered to acquire ReNew Power. Its shares had listed at $10.42 per share on December 11, hit an all-time high of $12.78 per share on February 5, and has tapered to $10.75 per share as on March 19. According to the investor presentation, RMGB valued ReNew Power at $3.76 billion, and post the acquisition the new combined entity’s equity value will be $4.37 billion. As part of the transaction, ReNew’s existing shareholders will own 70.2 percent in the new entity RNW. As part of the deal, RMGB will invest $1.2 billion to acquire 29.8 percent stake in RNW. RMGB will finance it via the $345 million IPO proceeds, and the $855 million it has raised from investors as private investment in public equity (PIPE). Some of these anchor investors are BlackRock, BNP Paribas Energy Transition Fund, Social Capital’s CEO Chamath Palihapitiya, Sylebra Capital, TT International Asset Management Ltd, TT Environmental Solutions Fund and Zimmer Partners. Of the 29.8 percent stake in RNW, these investors will hold 19.6 percent. Of the money that ReNew Power has managed to raise, $610 million is primary proceeds that will be used to build new capacity and reduce debt, $500 million will be paid as cash to ReNew’s shareholders and $90 million as fees to underwriters. The document does not clarify which existing shareholders of ReNew are cashing out as part of the deal. While this may look like a web of complex transactions that includes a listing, a merger, a PIPE deal, and a combined listing, India’s first renewable energy company’s de-SPAC listing opens the door for others who are looking to tap the US markets, and gives companies access to a class of investors who are keen on technology-enabled companies, with a focus of environmental, social and corporate governance (ESG) factors. ReNew is not the first Indian company to take the SPAC route to listing in the US. In 2015, for instance, Silver Eagle Acquisition acquired a stake in Videocon d2h. In 2016, online travel company Yatra listed on Nasdaq through a reverse merger with Terrapin 3 Acquisition, a US-based SPAC. Around this time, SPACs were relatively unknown. The markets were also very volatile back then. Macquarie Capital was a shareholder in Yatra.com and one of their other arms was also an investor in a SPAC, which is what helped Yatra.com better understand the complexities of SPACs. “The advantage we saw back then, of merging with a SPAC, was that it allows you the certainty of valuation as it’s a pre negotiated deal between the promoters of the SPAC and the target company and you are not solely dependent on capital market forces to determine valuation," says Dhruv Shringi, co-founder and CEO, Yatra. At the time of listing, Yatra's valuation was close to $350 million. SPACs have evolved over the years, and before 2019 their shareholders were mostly fixed income arbitrage funds. Today, in addition to these funds, there are the likes of Bain Capital and WL Ross & Co coming in as anchor investors and buying businesses they want to invest in for the long run, and provide greater stability. "When we did the SPAC it was largely made up of fixed income arbitrage funds, and this is challenging because they are investing for the return on the warrants and not as organic long-term shareholders," says Shringi. This meant that during the de-SPAC process, Yatra had to generate demand through new shareholders for its business and raise capital that would replace the existing shareholders. "In a scenario where it's a blank cheque company that is only made up of fixed income arbitrage investors, the minute you list and the deal happens, they will move out. This puts a lot of pressure on the stock and creates some trading idiosyncrasies, which are unique to SPACs." he adds. 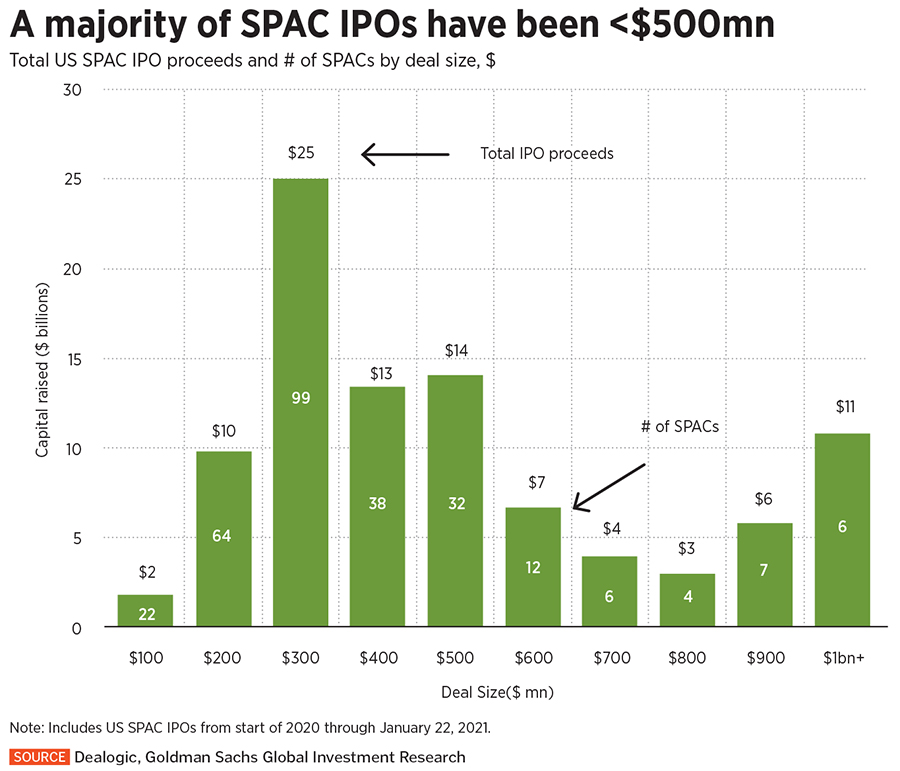 Not only are companies reverse merging and listing in the US, but Elevation Capital, headed by Ravi Adusumalli, is creating a SPAC that will target companies based in India. In a first of its kind launch, Elevation Capital tied up with San Francisco-based Think Investments LLC to float a SPAC called Think Elevation Capital Growth Opportunity, focussed on Indian technology companies looking to list in the US. The SPAC will be co-led by Adusumalli and Shashin Shah, founder and managing partner, Think Investments. As of December 31, 2020, Think Investments and Elevation Capital have invested a combined amount of $1.3 billion in private Indian companies valued at about $7.4 billion, and have generated an aggregate 5.7x multiple on invested capital. In addition, they had about $960 million in assets under management in public companies as of December 31, 2020. The blank cheque company filed for a $225 million IPO with the US SEC on March 19, offering 22.5 million stock units at $10 each and consists of one Class A ordinary share and one-fourth of one redeemable warrant. Each whole warrant entitles its holder to purchase one Class A ordinary share at a price of $11.50 per share. The board of this SPAC reportedly includes top names, including Paytm founder and CEO Vijay Shekhar Sharma and Dream11 co-founder and CEO Harsh Jain. According to a recent media report, online grocery delivery firm Grofers is in talks to make its public market debut through a merger with New York-based Cantor Fitzgerald’s SPAC. It is expected to raise $400-500 million, at a valuation of $1 billion. “We cannot comment on rumours. Our focus continues to remain on growth and building technology that empowers the grocery ecosystem to make products more affordable and accessible for millions of Indian households,” Grofers said in an email to Forbes India. In 2020, the US saw a frenzy of Nasdaq-listed SPACs, and they continue to pile up in 2021 as well. Companies such as Nikola, an electric vehicle firm, and DraftKings, a sports betting company, saw their valuations soar since their SPAC listings. As Bob McCooey, senior vice president and global head of capital markets at Nasdaq, says, “five SPACs are happening today and three-four happened the day before”. According to a January report by Goldman Sachs, last year 161 traditional IPOs raised $67 billion in the US, while 229 SPAC IPOs raised $76 billion, a five-fold increase from the previous year’s record high, and accounted for 53 percent of the total IPO capital raised. SPAC acquisition announcements and deal closures also hit record highs in 2020: 99 SPACs representing $30 billion in IPO capital announced merger and acquisition (M&A) targets, while 55 SPACs closed de-SPAC acquisitions worth $79 billion in enterprise value. “The most interesting thing about the SPAC asset class is that it has democratised the entire process, allowing the average retail investor to have an opportunity to invest alongside some of the greatest investors of all time,” says McCooey. Nasdaq has done 70 to 80 percent of the business combinations in the history of SPACs. 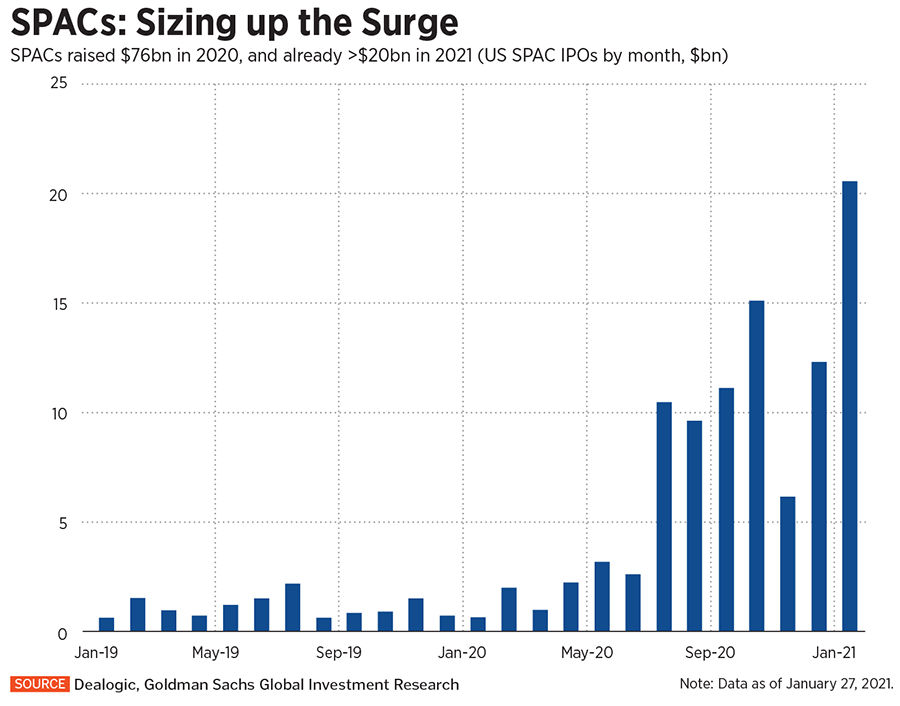 Because of the way in which a SPAC is structured, after the listing, the sponsor needs to acquire a target company within 18 months. Shareholders of the SPAC vote on the acquisition. If they are not happy with the target that is chosen, then they can redeem their warrants and shares. If the SPAC cannot find a target and complete the merger within the stipulated time, then it liquidates and winds up the shell company. The primary advantage SPACs offer is the ability to complete the transaction in a shorter time frame as compared to traditional IPOs. “Since SPACs have a defined term they are motivated to complete the transaction within that period. It allows for a focussed process and reduced valuation anxiety for the sellers. SPAC sponsors are typically seasoned investors with experience of realising post-deal value beyond generic strategies,” says Karan Marwah, partner and head, capital markets advisory at KPMG. But what has led to this recent popularity of product class that has been around since the mid-1990s? Experts believe one reason is the quality of sponsors. High-profile names who have been writing cheques for these companies include venture capitalist Chamath Palihapitiya, basketball legend Shaquille O’Neal, and former baseball player Alex Rodriguez, who is reportedly looking to raise $500 million through Slam Corp’s SPAC listing. Be it private equity funds, hedge funds, institutional investors, high-net-worth individuals (HNIs) or the so-called ‘Robinhood investors’, everyone seems to be betting on SPACs. Although Nasdaq hasn’t made too many changes on the regulation front, there are a lot of innovations being done with SPACs. For instance, McCooey says serial SPAC sponsors are creating families of SPACs and are looking at different types of structures: “As more and more SPACs come to the market, you find that the sponsor wants to stand out from the crowd. This could mean a lot of things: Going to different sectors that have not attracted as many SPACs, tapping into another geography, and having different structures.” Mutual funds and hedge funds are now slicing out a portion of their portfolios to exclusively invest in this asset class.

Tweets by @forbesindia
India's Best Employers: Tally Solutions, going back to the drawing board
We've always considered service to society as a duty, a privilege, and an opportunity: Amit and Archana Chandra at FILA 2021