Israel's vaccination program has been remarkably swift and successful and just as it became a real-world laboratory for the efficacy of the vaccine, it is now becoming a test case for a post-lockdown, post-vaccinated society 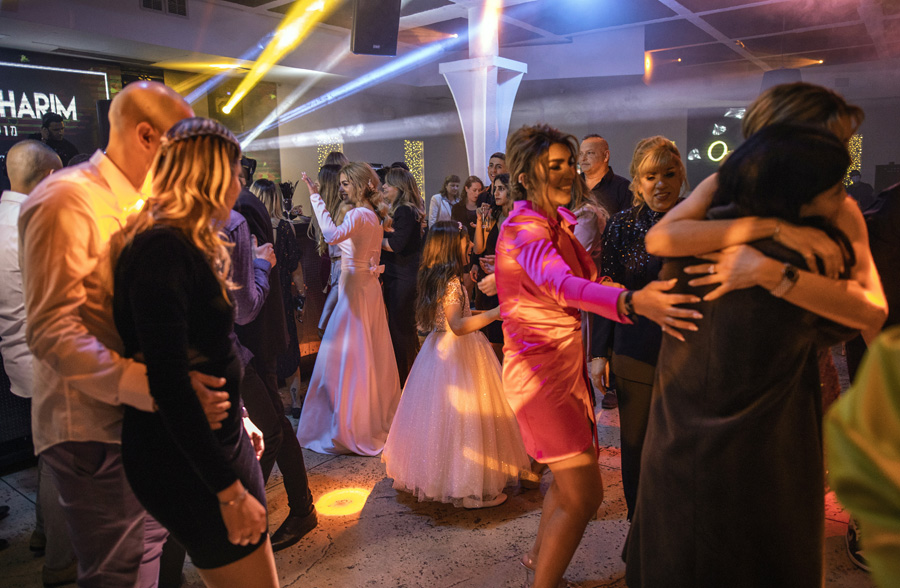 A wedding in the southern city of Kiryat Gat, Israel, on March 24, 2021. Israel’s vaccination program has been remarkably swift and successful, but the country's real-time experiment in post-lockdown living leaves many questions unanswered. (Dan Balilty/The New York Times)

TEL AVIV, Israel — As the lights dimmed and the music started up, an audible wave of excitement rippled through the crowd. Somebody a few rows above me ululated with joy, as if at a Middle Eastern wedding.

I had come to Tel Aviv’s Bloomfield soccer stadium for a concert by Dikla, an Israeli singer of Iraqi and Egyptian origins, which was hailed by the city as a celebration of the “comeback of culture.” It was the first live performance I had attended in over a year. There were only 500 vaccinated Israelis in a stadium that ordinarily holds nearly 30,000 people but it felt strange and exhilarating to be in a crowd of any size after a year of intermittent lockdowns.

The audience was confined to their socially distanced seats, dancing in place and singing along through their masks. But the atmosphere was exuberant and it confirmed my status as a member of a new privileged class: the fully vaccinated.

We, a group that includes more than half of Israel’s 9 million people, are getting a taste of a post-pandemic future.

Membership in the class is certified by the Green Pass, a document you can download and carry in your phone. It includes a sort of GIF, a little moving animation of green people walking along, looking like a happy, fully vaccinated family.

Israel’s vaccination program has been remarkably swift and successful.

In recent weeks, new cases of COVID-19 have dropped dramatically, from a peak of 10,000 a day in January to a few hundred by late March. The economy has almost fully reopened. Just as Israel became a real-world laboratory for the efficacy of the vaccine, it is now becoming a test case for a post-lockdown, post-vaccinated society.

The Green Pass is your entry ticket.

Green Pass holders may dine indoors in restaurants, stay in hotels and attend indoor and outdoor cultural, sports and religious gatherings in the thousands. We can go to gyms, swimming pools and the theater. We can get married in wedding halls.

We celebrated the spring holidays of Passover and Easter in the company of family and friends.

Local newspapers and television stations are advertising summer getaways for the fully vaccinated in countries prepared to take them, including Greece, Georgia and the Seychelles.

And when you book a table at a restaurant, they ask, Do you have a Green Pass? Are you vaccinated?

The system is imperfect, and, beyond the Green Pass, in many ways “system” may be an overstatement. Enforcement has been patchy. There are troubling questions about those who are not vaccinated and noisy debates playing out in real time — some landing in court — about the rules and responsibilities of the return to near normalcy.

Moreover, there’s no guarantee that this really is the start of a post-pandemic future. Any number of factors — delays in vaccine production, the emergence of a new vaccine-resistant variant and the huge numbers of Israelis who remain unvaccinated — could rip the rug out from under it.

The new world has also underscored the inequities and divides between societies with more or less access to the vaccine.

Friends and colleagues in the West Bank and Gaza have not been able to get vaccinations yet.

The Palestinian vaccination campaign is just getting started with doses largely donated by other countries amid a bitter debate over Israel’s legal and moral obligations for the health of people in territory it occupies. Israel has vaccinated about 100,000 Palestinians who work in Israel or in West Bank settlements but has been criticized for not doing more.

More than 5.2 million Israelis have received at least one shot of the Pfizer vaccine. About 4 million remain unvaccinated, half of them people under 16 who are not yet eligible to receive the vaccine pending regulatory approvals and further testing on children. Hundreds of thousands of citizens who have recovered from COVID were only recently included in Israel’s vaccination program.

And up to 1 million people have so far chosen not to get vaccinated, despite Israel’s enviable supply of vaccine doses.

Some oppose taking the shot on ideological grounds while others are said to be anxious and waiting to see the vaccine’s effect on others. They have engendered little public sympathy, and health officials have criticized them for succumbing to what they describe as fake news spread on social media.

The holdouts present tricky moral and legal questions. Should they have the right to rejoin the world too? Is it ethical to discriminate against them? Or is it fair to force those who have done everything they could to protect themselves by getting vaccinated to share space with people who chose not to?

To solve the conundrum, and cater to under 16s, the government has allowed venues to offer rapid testing as an alternative to the Green Pass. But many business owners, responsible for ordering and financing the testing stations, have found the logistics impractical.

Unlike concerts and soccer matches, however, going to work is not a luxury for most people.

A teaching assistant at a school for children with special needs in central Israel refused to be vaccinated or, as her employer, the town of Kochav Yair-Tzur Yigal, demanded instead, present a negative COVID test on a weekly basis.

The school barred her from coming into work, with backing from the town council.

The teaching assistant, Sigal Avishai, appealed to the Labor Court in Tel Aviv. She argued that the council’s demands “impinged on her privacy” and were “without legal basis,” and that the requirement of a weekly test “was intended to pressure her into getting vaccinated contrary to her beliefs,” according to court documents.

Last month, the court ruled against her, saying her rights had to be balanced against those of the teaching staff, the children and their parents to “life, education and health,” citing the particular vulnerability of the children in question.

In a country with plenty of doses to go around, access to the vaccine is not an issue, said Gil Gan-Mor, director of the civil and social rights unit at the Association for Civil Rights in Israel.

In Israel, he said, “Anybody who is complaining can get the vaccine tomorrow morning.”

But in the absence of legislation, employers have been making up their own policies. At least one college of higher education was relying on the Labor Court precedent to require all staff and students to obtain a Green Pass in order to attend classes on campus.

In another case that went to court, the Health Ministry wanted to distribute lists of unvaccinated people to the local authorities so the authorities could, for example, identify unvaccinated teachers who have returned to school and try to persuade them to get vaccinated.

Citizens rights groups sued to prevent the ministry from distributing the lists, arguing that it was an invasion of privacy and that the medical information could not be adequately safeguarded. The case is before the Supreme Court.

Even where there are rules, enforcement is spotty.

The concert in Tel Aviv was the first time I was asked to show my Green Pass — and the last. My family has since spent a weekend at a B&B in the Galilee where breakfast was served in a closed room for all the guests, including unvaccinated children. A crowded Italian restaurant in the area made it clear that it was not sticking to the regulations, offering us indoor seating with a 7-year-old.

Back in Jerusalem, when I phoned to make a reservation for two at my favorite restaurant, serving pricey fresh market cuisine from a lively open kitchen, I was asked if we both had Green Passes. But when we arrived, nobody asked to see them.

The tables were placed as cozily as ever. Strangers sat shoulder to shoulder at the bar. Our young waitress was unmasked. A diner at the next table questioned how COVID-safe it all was, then shrugged and carried on with her dessert.

I feel a personal sense of lightness and relief as I go about my new, vaccinated life. I even caught myself the other day in the supermarket without my mask on, which is still required in public places.

We are living in splendid isolation. Virus restrictions still make most travel a daunting proposition and non-Israelis generally cannot enter the country. I miss my family overseas. Until the rest of the world catches up, we are a nation living in a bubble.

Tweets by @forbes_india
Commuting hurts productivity and your best talent suffers most
Pandemic, Endemic & Fundemic: How a global crisis became payday for startups