It's pouring unicorns in India...out of 10 born so far this year, six sprung to life in April. The funding bus is set to get more crowded 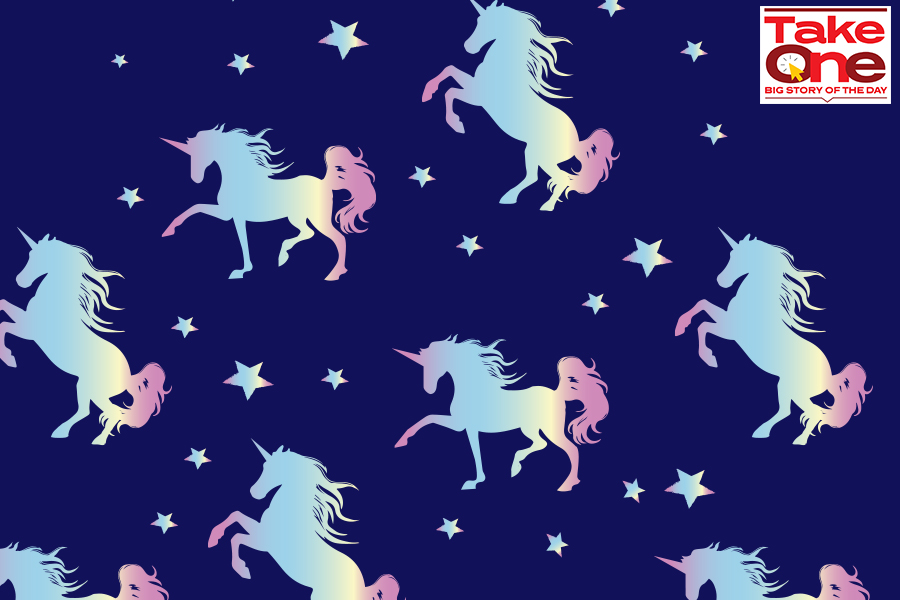 The chances of precipitation were high this month. Though the weather stays pleasant in April—and the likelihood of a downpour towards the fag end of the spring season is rare—the forecast in January made it clear that 2021 would be an exceptional year. “India will have at least 12 unicorns (privately-held firms with a valuation of $1 billion and more) this year,” a joint report by Nasscom and global management and strategy consultancy Zinnov boldly predicted in the first week of January this year. Well, the makers of the report were realistically optimistic. Reason: Last year, 14 startups joined the unicorn club in India as against 10 in 2019. So another 12 over a span of a year was a no-brainer. January did start on a rainy note. By mid-month, a week after the prediction, Digit Insurance became the first unicorn of the year. By the end of March, the country added three more. The skies looked heavy, and the funding storm was set to pick up furious pace. On the first Monday of April, social commerce startup Meesho stormed into the coveted club. Next day, fintech startup Cred followed suit. On Wednesday, it was the turn of online pharmacy firm PharmEasy. Over the next few days, it started pouring. Social media app ShareChat, online investment platform Groww, and messaging startup Gupshup gatecrashed the party.

In the first nine days of April, India has seen a staggering six unicorns. To put things in perspective, the number is equivalent to what the country logged cumulatively in four years from 2014 till 2017. There is another way to slice the data, though. Ten unicorns that India has seen so far in 2021 is more than the numbers in 2017, and matched the count in 2019 (see box). With eight long months still to go in this year, the unicorn club is all set to get crowded. “It’s great for the ecosystem. Indian startups are coming of age,” reckons Deep Kalra, founder of online travel aggregator MakeMyTrip, which took a decade to turn into a unicorn. Reasons for a sharp uptick in the birth of unicorns are not hard to find. Prem Pavoor, partner and India head at the venture capital firm Eight Roads Ventures, explains. “This is a consequence of a confluence of supply and demand,” he says. The VC fund happens to be one of the backers of API Holdings, the parent company for PharmEasy—one of the freshly-minted unicorns this month. Icertis, a contract lifecycle management SaaS firm and another portfolio investment of Eight Roads Ventures, has nearly tripled its valuation to $2.8 billion since 2019 when it turned into a unicorn. On the supply side, Pavoor underlines, there have been significant tailwinds driven by the pandemic around penetration and consumption of digital content and enabled services. The lockdown also catalysed an accelerated uptake of enterprise software, where Indian companies are swiftly emerging as global contenders. 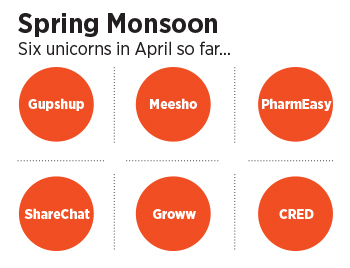 The venture capitalist now breaks down the demand side of the unicorn story. “The demand for high-quality companies is at its peak,” he reckons. Beyond the traditional investors, there is a new crop of entrants—global private equity, VC and hedge funds—who are keen to take part in the Indian growth story. “They have been quick to move and offer attractive valuations, which has positioned them as top suitors for the best companies,” he adds. What has also added rocket fuel to the unicorn growth is excess flow of the American dollar. “Capital is cheap and interest rates are low, especially in the US,” explains Vaibhav Agrawal, partner at Lightspeed Venture Partners. Capital, therefore, is chasing growth.  “This has made internet companies very attractive,” he adds. Add to this the fact that India is perhaps the last internet market—with over 1 billion users—that is completely open to internet and technology entrepreneurs globally. “This creates a perfect storm for capital inflow,” he says.

The factor, though, that has triggered a surge in unicorns is the pandemic. Covid-19 has expanded the total addressable market for the internet across many categories such as ecommerce, SaaS, education and healthcare. The technology investor community has gone from looking for $1 billion outcomes to $10 billion or maybe $30-$50 billion outcomes within a matter of months. This explains high-priced rounds, and companies getting valued over a billion. The positive side of the boom, Agrawal underlines, is that the best startups haven’t wasted the opportunity in the pandemic crisis. “They’ve improved businesses models, cut discounts, worked on order frequencies and take rates, and emerged leaner,” he reckons. Some analysts point towards the maturity of the startup ecosystem to explain the mushrooming of unicorns. Every growing market has an inflection point when it gets into high gear and accelerated growth. “India is going through such a phase,” says Anup Jain, managing partner at Orios Venture Partners, a venture capital fund. The tech startups, he underlines, have been buoyed by two things. First is the infusion of capital investments into the country. With Tiger Global and Softbank having raised fresh funds with allocation to India, startups are grabbing investments. Secondly, accelerated digital adoption means that companies with even $300 million in valuation are now ready to jump to the next level. “The US has 135 unicorns, China a 115 and India has some 48,” he says. Forget overcrowding, the unicorn club is yet to get crowded.

What the easy flow of money into the startup ecosystem also means is an impending phase of consolidation. “The fact that capital can create market leaders is well established,” says Radha Kizhanattam, partner at Unitus Ventures. What the pandemic has done, she explains, is to accelerate this phenomenon in sectors which are ‘new normal’ ready. While investors are now looking to partner with some of the best entrepreneurs who have a head start in being new-normal-relevant, several good companies who don’t manage to attract sufficient capital are left with the option of sub-optimal or stagnating growth. The newly-minted unicorns, she stresses, are likely to take the inorganic route to rapid expansion leading to some much-needed participation in the merger and acquisition markets beyond the very few in the ecosystem today. “This will lead to some liquidity for early investors as well,” she adds. Easy liquidity also means that startups are getting into the ‘bumping up valuation’ game. Does it create a bubble in the long run? Well, there definitely is a flip side. K Ganesh points out one of the threats. “Currently, the valuations are at a stratospheric level, which is untenable. Some amount of realism needs to come in,” reckons the serial entrepreneur and promoter of startups such as BigBasket, Portea Medical and HomeLane. Like in any bull cycle, Ganesh explains, many not so fundamentally strong models are born, and even get funded in the hype. But when the realism sets in, they all fold up. “This is part of the cycle. I fear the same may happen to some of the startups and entrepreneurs,” he sounds a word of caution. “We need to be prepared for this. It is not bad, but just that we must be aware,” he adds.

Another potential pitfall could be that unit economics might go for a toss. There will be a few founders who will miss the point in the financing frenzy and get busy ‘buying growth’. “Such businesses will hit a wall eventually,” avers Agrawal of Lightspeed Venture Partners. This is a real opportunity for investors to engage founders in rich conversations around goals, trade-offs and priorities. “With more capital comes more responsibility,” he says. The focus must be on enduring companies, and not unicorns. “Just because you become a billion dollar company, doesn’t mean you will automatically become an enduring company,” says Rajan Anandan, managing director at Sequoia Capital India. Though turning unicorn is a good marker, it in no way implies that the startup will become an enduring company. “We want enduring companies,” he stresses. For now, though, the Indian startup ecosystem is cheering the enduring, and galloping, unicorn story. There is no stopping the funding bus, which has replaced ‘Horn OK’ with ‘Unicorn OK’ please.

Tweets by @forbesindia
Millennials are shunning credit cards. This entrepreneur's new buy-now-pay-later model made him a billionaire
Photo of the Day: End of an era