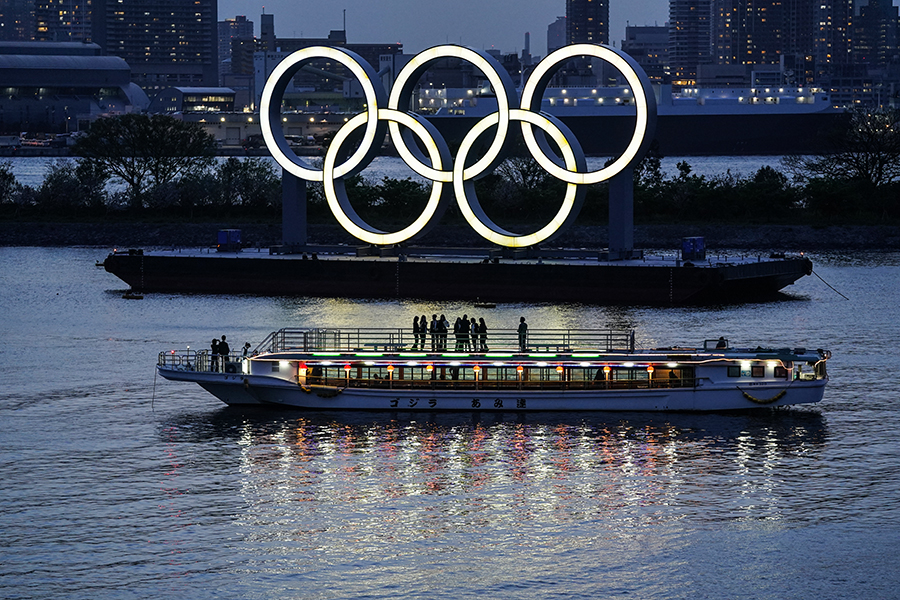 A boat sails past illuminated Olympic rings floating in the waters off Odaiba island in Tokyo, Japan, on Thursday, April 1, 2021. The Tokyo Olympic Games organizers said on March 20 that spectators from overseas wouldnt be allowed so as to limit crowd size. Its still unclear how many local fans might be permitted to enter stadiums. Photographer: Toru Hanai/Bloomberg via Getty Images

The time has come to press pause and re-imagine the Olympics. It might even be time, I’ve come to believe, for the entire endeavor to close down for good. First, consider the near term. In July, yet another wildly over budget Summer Games, originally slated for 2020 but postponed because of the pandemic, will begin in Tokyo. The timing remains awful. Japan has worked hard to tamp down the coronavirus, but now cases are creeping up, and the nation’s vaccination rate is lagging. Organizers just rerouted the torch relay planned this week to reach the streets of Osaka, where one health official said the spread of new variants had pushed the medical system to “the verge of collapse.” Into this troubled environment, 11,000 athletes from all corners of the globe will descend, with coaches, officials, Olympic support staff, media workers and more. The Tokyo Games could end up being a three-week superspreader event that leads to death and illness across Japan and far beyond. The Japanese public has grown wise to the health risk. It is also aware of the estimates that show the cost for the games has swollen to a record $15.4 billion, up $3 billion in the last year alone. Recent surveys show close to 80% of Japanese say the games should be postponed again or canceled. Then there are the Winter Games, scheduled for February 2022 in and around Beijing. Anticipation has mostly centered on whether they should be boycotted because China has been repeatedly accused of brutalizing its own people. China denies such claims, but the Biden administration, the Canadian Parliament, United Nations officials and up to 180 human rights organizations have said China is engaged in genocide against ethnic Muslim minorities. That’s on top of the current Chinese government’s brutal record of crackdowns on dissent in Hong Kong and Tibet, which its officials have continued to deny. What’s the best way to respond? Should the Biden administration push an all-out boycott that keeps athletes at home even as a Chinese foreign minister last week warned of a “robust Chinese response”? Should US corporate sponsors bow out? Should American broadcasters refuse to show China in a favorable light?
Do winter athletes go to Beijing while US diplomats steer clear? There are some pundits who believe athletes could send the sharpest signals, by rising in protest on medal podiums, during the opening ceremony or the competitions. But that’s asking a lot of a group shut out of genuine power by the International Olympic Committee, which still has Rule 50 on its books, a bylaw that strictly bans displays of dissent. To go against it is to risk being barred from future competition. “I would be terrified to protest in China, and I will be terrified for my American teammates if any of them decide to stand up” and make their opinions known while there, said Noah Hoffman, a two-time Olympic cross-country skier who is now a board member for Global Athlete, a nonprofit pushing to reform the games. Hoffman noted the US Olympic and Paralympic Committee recently agreed to allow athlete protest, but until the IOC does the same, athlete voices will continue to be muted. Recall that in 2014, the Winter Olympics were hosted in Sochi, Russia. The host nation not only conducted a vast doping operation during the event, but annexed Crimea shortly afterward, prompting widespread international condemnation. Why did the IOC award the 2022 Games to yet another autocracy with a shoddy human rights record? In 2015, when the final decision was made, two options remained: China—which held the summer games seven years earlier—and another dictatorship, Kazakhstan. Nations that would seem to be more ideal hosts, including Norway and Sweden, dropped out of the running, part of a trend toward skepticism about the costs of hosting an Olympics. The modern Olympics, founded in the 1890s as a way to showcase “a life based on the joy found in effort, the educational value of a good example and respect for universal fundamental ethical principles,” are now synonymous with scandal of many varieties, including doping, bribery and physical abuse of athletes.

They have sparked suffering among the poor and working class in host cities through gentrification and the forced removal of tens of thousands of residents at venues from Beijing to Seoul to Rio de Janeiro. I’ll never forget reporting from the costly, freshly constructed arenas of the 2016 Rio Games and then heading off to the nearby favelas — the impoverished tenement communities dappled across the port city. There, near open sewers that flowed with rivers of urine and feces, I heard the anguished stories of residents who had been kicked out of their small homes to make way for Olympic construction. I also saw an ever-present feature of the games: the paramilitary-style police seemingly on every corner, machine guns in tow, rousting street kids from corners, keeping tabs on the locals so the city could maintain a sterling image to the world. Rio couldn’t afford the Olympics, same as Athens, which put on a boondoggle of a Summer Games in 2004 that ended up costing nearly $11 billion—double the early predictions—in a precursor to Greek financial woes that nearly left the nation bankrupt. Those cities are hardly alone.

It’s time to ask the big questions about the Olympic enterprise. Are the benefits worth the costs? Should the Olympics continue to exist if they keep causing such harm? What could genuine reform look like? Here are a few ideas. Stop awarding the games to authoritarian nations that blatantly disregard human rights. Give athletes greater power—not just so they can protest from the medal stands, but so they can be equal partners in shaping the entire Olympic movement. Instead of hopscotching across the world, consider alternatives. Maybe park the games permanently at two well-used venues—one for summer, one for winter. That would cut costs, environmental damage and displacement. It would also end the churn of a bidding process that invites corruption. Or decentralize. Hold individual events in already built sites across the globe during a three-week window. Sure, we’d have to give up the spectacle of a lavish opening ceremony and the thought of athletes from different sports mingling in Olympic Villages. But in an interconnected world full of lavish spectacle, is all that still a must?
I admit, there aren’t many straightforward answers, but it’s time to work toward a new future.

Tweets by @forbesindia
Inside India Quotient, the VC firm that won big with ShareChat
What's good about tech bubbles