Forbes India W-Power 2021: Role models who will inspire a generation 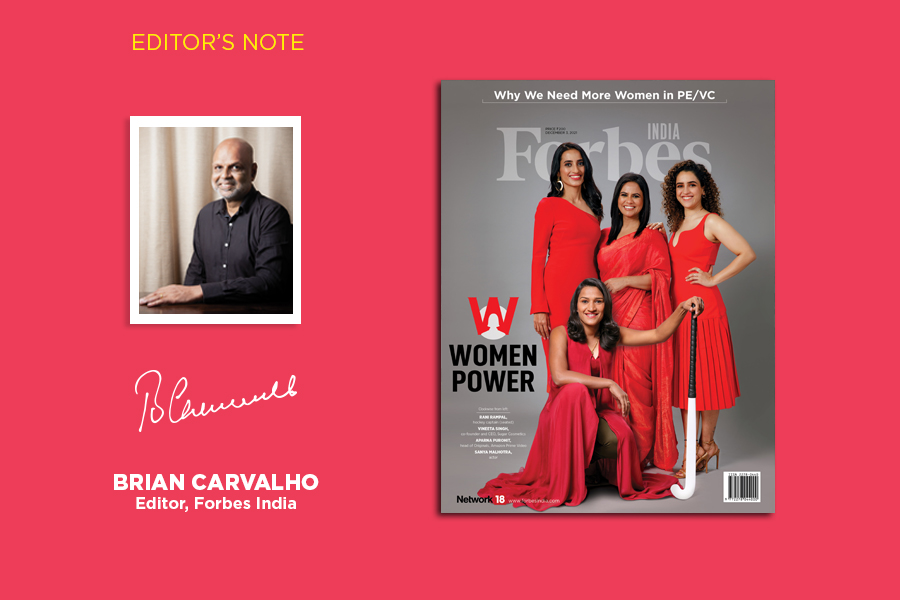 Last fortnight, when the business media went to town after Nykaa Founder Falguni Nayar emerged India’s wealthiest self-made female billionaire, a section of social media wonks wondered whether playing up ‘female’ in the screaming headlines was indeed necessary. After all, when male moneybags hit the big time, their gender gets short shrift.

In a similar vein, every year a section of the Forbes India team—yours truly included—ponders the merits of a listing of women achievers. The argument: Why do we need a separate listing based on gender, why not focus instead on creating diverse lists in the first place?

It’s a valid argument. However, the reality—not just in India but much of the globe—is that women power in startups, investing firms and boardrooms is still inadequately represented. Hence, the counter is that whenever a woman proves to be an outlier and emerges on top in a male-infested playing field, more reason to make a splash. Also, such women achievers who overcome considerable odds along the way are just the role models who will inspire a generation of women to break the mould, and to aspire and think big.

The purpose of the Forbes India W-Power list is precisely that: To ensure that a bagful of success stories will beget a million more. Looking at the numbers, there’s still a long road to traverse. A recent study by EMA Partners, a leadership advisory firm, pointed out that as of early August, India had just five unicorn founders who were women—that’s out of 136 founders of 56 unicorns.

The scenario is not much different at traditional companies. Another EMA diversity study found out that only six of the top 250 corporate CEOs were women in fiscal year 2020. In fact, the percentage of women CEOs/MDs had dropped to 2.4 percent in that year from 4.1 percent in fiscal year 2016, which had 10 women CEOs among 245 companies.

The gap—in visibility as well as pay—extends virtually everywhere, from business to sports and entertainment. Cricket may be a religion in India, but the gods are predominantly male—never mind that the women in blue have made it to three World Cup finals and, more recently in 2020, to the World T20 decider. In the film world, too, except for regional pockets, stories are tailored for male protagonists, and the pay gap is wide.

The Forbes India W-Power study, helmed by Varsha Meghani, is an attempt to celebrate women who have stayed the course, overcome several challenges and can look back with some satisfaction on how far they’ve reached. The journey, of course, continues for the 20 women on the W-Power list: For Dr Priya Abraham in scientific research; for the unknown Covid warriors in rural India, the Accredited Social Health Activists, or ASHA workers; and for Rani Rampal, captain of the Indian women’s hockey team that achieved a historic fourth place at the Tokyo Olympics, who is still training “every single day” and “to win”.

Perhaps no industry manifests the gender gap more accurately than venture capital and private equity. Forbes India’s Pooja Sarkar reached out to 51 PE and VC firms to find out how gender-diverse they were. Only seven got back. The silver lining? Sarkar was able to identify a handful of women who are at the forefront of investing and deal-making; as well as a few funds that do take gender diversity seriously. Don’t miss ‘Breaking Barriers’.

Tweets by @forbesindia
Space data on Brazil's rainforests; Adele commands, Spotify says 'anything for you'; plus, Sateesh Andra on investing in deep tech
How we found the superwomen of Forbes India W-Power 2021