This para-athlete surpassed numerous odds to clinch a historic silver in table tennis at the Tokyo Paralympic Games this year, a remarkable achievement for someone who started playing the game as an adult 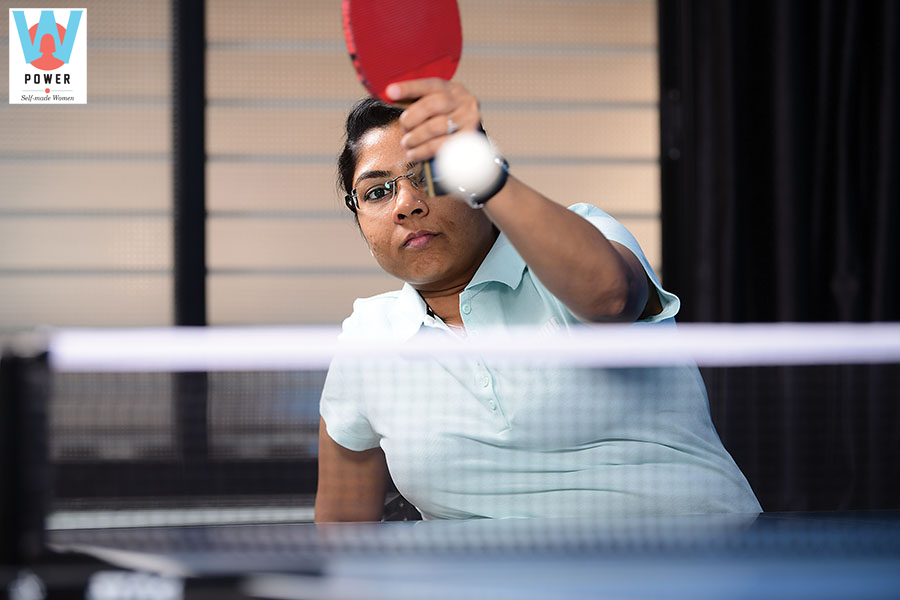 As Bhavina Patel arrived at the Ahmedabad airport, she received a grand welcome with drumrolls, loud cheers, dance and a hoarding that read ‘India’s pride Bhavina Patel’. The 35-year-old was overwhelmed because it was the first time in her career that she had received such a huge welcome. Patel has won many medals in the past at the international level, but she finally had her moment in the sun after she clinched a historic silver in the women’s single table tennis, class 4, at the Tokyo Paralympic Games in August.

Patel, who was diagnosed with polio as a 12-month-old, knocked out World No 2 Borislava Peric-Rankovic of Serbia in straight games in the last eight stage. With this victory, she became the first Indian table tennis player and second female athlete (after Deepa Malik), to achieve this feat at the Paralympic Games. Patel, who is ranked 12th in the world, had a terrific maiden campaign in Tokyo where she defeated four players ranked higher than her. She was recently conferred the Khel Ratna.

Patel, who has been on crutches since her polio diagnosis and uses a wheelchair while playing, hails from a village called Sundhiya, Vadnagar in Mehsana district of Gujarat. She had no idea about table tennis until she completed her class 12 in her village. “After finishing high school, I decided to do a computer science course at the Blind People’s Association in Ahmedabad. This is where I was introduced to table tennis,” she says. “I saw my friends playing it and I got interested in the game. My friends taught me how to play and I instantly fell in love with table tennis. I feel free while playing it,” says Patel while walking me through her room where she has set up a small table so that she can play and practice whenever she wants. 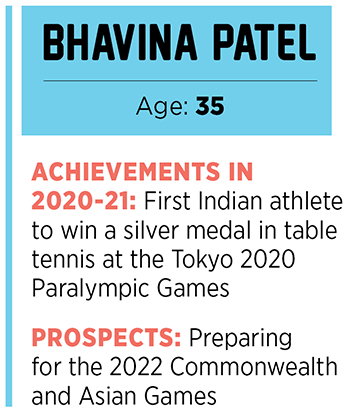 Gradually, Patel started playing table tennis professionally. In 2009, she won her first gold medal at the Para Table Tennis National Championships in Bengaluru. She started her international career from Jordan but it took a while to win her first medal.

In 2011, she won a silver medal at the Para Table Tennis Thailand Open, after which she won a silver at the Asian Regional Championship in 2013. Patel won her first gold in singles at Bangkok in 2019 and followed it up with a doubles gold. She has also won a medal at the 2018 Asian Para Games. To date, Patel has represented India 29 times at the international level, where she has won five gold, 14 silver and eight bronze medals.

All this was not a cakewalk for her, intervenes Nikul Patel, Bhavina’s husband. “I have seen her go through a lot of struggle, due to lack of basic facilities for persons with disabilities. She had to go out of her way and do certain things. She has had to change buses, hop into autorickshaws, or sit and use the staircase as lifts were not available at certain places. She is so determined that she never gives up. That fire in her belly is one of the reasons I fell in love with her.”

When it comes to infrastructure, facilities, training centres and academies, a lot needs to be done for Paralympians. Things have improved but there is still a long way to go. “After I qualified for Tokyo 2020, I started receiving support from the government and other organisations but before that I was practising on my own without any support. So many para players are not able to achieve their dreams of representing India just because of lack of facilities. I know so many of them who can perform well if given the right kind of training and assistance. Things are changing and I am hopeful it will get better in the future,” says Patel, who is now gearing up and preparing for the 2022 Commonwealth Games and Asian Games.