For the only doctor at the farmers' protest site at Tikri, the day never ends

Dr Swaiman Singh, a US-based cardiologist, has been taking care of all the essential requirements for thousands of protesters at the Delhi borders 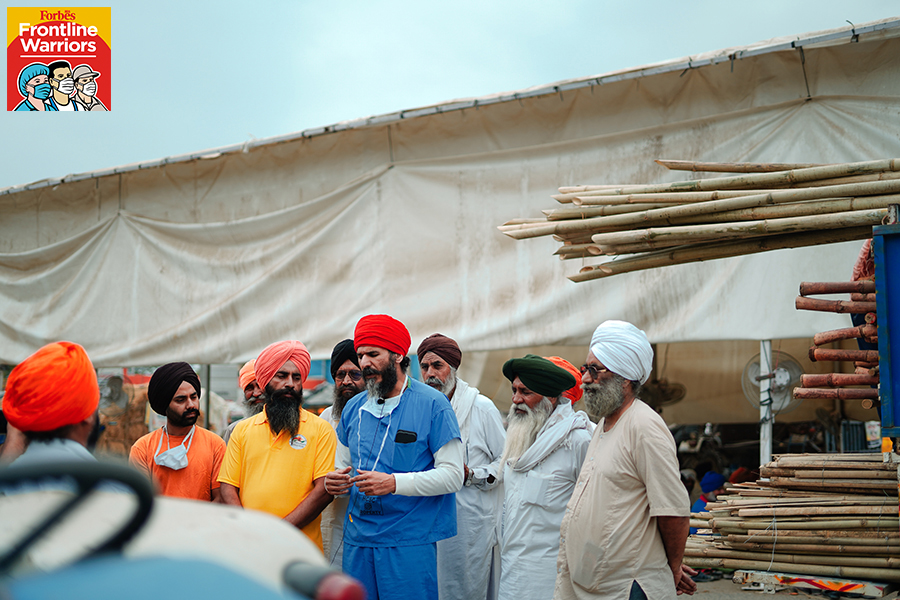 What was supposed to be a five-day trip to India has become an indefinite stay for Dr Swaiman Singh, a 34-year-old US-based cardiologist who is singlehandedly taking care of all the medical needs of the hundreds of thousands of farmers currently protesting the three farm laws (passed in September 2020) at the Delhi borders. Dr Singh, who had been getting various distress calls from farmers while he was in the US, knew he had to come down when he heard, in November, that one of his close family friends from his ancestral village in Punjab had suffered a heart attack at one of the protest sites and there had been no doctor or medical facility to treat him.

“I used to get a lot of calls for help from the protest sites. Sitting in the US, I couldn’t do much. The way things were shaping up, I knew I would have to come to India as none of the neighbouring cities were providing any medical assistance to the farmers,” says Singh, who is also the founder and president of the NGO 5 Rivers Heart Association that operates in the USA, India and Ghana. The NGO has been working at the Delhi borders since November 2020, when the farmers’ protests first started, and Singh came down to visit the Tikri border in the first week of December. He thought he would oversee and streamline the work of the NGO and go back, but seeing the situation on the ground he quit his fellowship at Robert Wood Johnson University Hospital in Newark, New Jersey, and stayed. He and his team have since set up medical camps and makeshift hospitals, and provide medicines and consultation to protesters, policemen, CRPF personnel and visitors for free.  To be able to sustain on the road for months on end requires houses, sanitation facilities and medical support, among other things–all of which are being provided by Dr Singh and his 5 Rivers Heart Association (5RHA) team. The organisation has been building semi-permanent houses primarily for the elderly, women, and children at the borders. They’re also constructing gyms, classrooms, libraries and conducting cleaning drives along with their primary focus on providing healthcare. 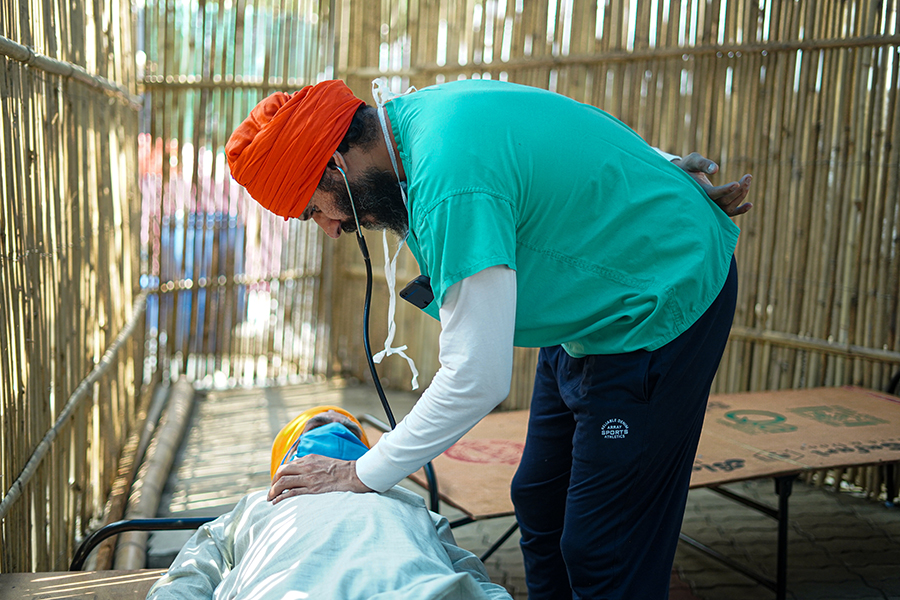 While initially Singh was able to put together a team of 20 doctors to serve along with him at the borders, when the second wave hit, most of them had to go back to their hometowns. While there are some visiting doctors at Ghaziabad and Singhu, Singh is currently the only doctor at the Tikri site. He is also overseeing the needs of the people at all the borders. “There must be around 80,000 protesters currently at the three Delhi borders, Ghaziabad, Singhu and Tikri. We provide all kinds of assistance to them, the locals, policemen and CRPF men. In a day, 4,000 to 6,000 people get treated at our camps,” he says.  Singh and his workforce of 1000 people, including NGO team members and volunteers, have set up 1100 bamboo and steel houses, a library with 10,000 books, created a network of 10,000 doctors from around the world who are providing assistance through teleconsultations, and have treated more than 600,000 people through their medical camps. “5RHA aims to provide equal education and healthcare opportunities to everyone, irrespective of their financial status, religion, caste, or creed. It’s the poor who suffer the most under any catastrophic circumstances, we want to be able to help them,” asserts Singh, who had also volunteered as a doctor during the Black Lives Matter protest in the US. Singh has also taken several steps and established precautionary measures to deal with the Covid-19 situation at the protest sites. “We conduct regular tests, have tried to segregate people in small groups, and advise protesters to take precautions like wearing masks, using sanitisers, etc. To date, at least at Tikri border, we haven’t had a single Covid-19 case, despite people travelling back and forth to their hometowns,” he says. Through his active social media presence, Singh communicates about the on-ground situation, bursts Covid-19 myths, and educates people on what precautionary measures need to be taken. He and his team regularly conduct seminars and awareness drives about Covid-19 and vaccination for the protesters. Singh adds that they have also created the infrastructure to take care of Covid-19 patients if and when protesters are affected by the disease. “Within the houses we've built, isolation rooms have been created. In case someone tests positive, we’ll be able to isolate them while providing all the medical facilities.”  5 Rivers Heart Association is also sourcing and providing oxygen cylinders, ventilators, and medication to people in need in Delhi and Haryana. “No one should die because of lack of resources that should have been easily available. We’re trying our best to bridge the gap as much as possible,” he says.  He has also been trying to arrange for vaccines. “I have been begging the Delhi and Punjab governments for vaccines for the past eight weeks. I’ve written to them, sent emails, reached out to them via Twitter, but we have got no response. We have enough resources to carry out seamless vaccination drives, but none of the authorities have shown interest. Surprisingly, when the phase three vaccination drive started in Punjab they declared construction workers as essential workers, but not the farmers,” Singh says with a sigh. He has now reached out to Moderna and Pfizer for vaccines. “They have been much more responsive, they are now figuring out ways to supply vaccines here,” he says.  For the people at the borders, Singh is just a call away. Every day, he deals with cases of heart attacks and cardiac arrest, diarrhea, depression, and fear. “My day never ends. Since the very first day at the Tikri border, it feels like one continuous long journey where there can be an emergency at any time at one of the three borders, which I have to attend to. When not treating patients or arranging for their medical requirements, I’m working towards creating a safer, hygienic living infrastructure for the protesters,” says Singh. Since the last couple of days, with strong winds and heavy showers in Delhi, Singh and his team’s workload has increased. “Some of the houses have been damaged by the rain, we are now working to rebuild them,” he says. His organisation is also preparing to provide the protesters adequate resources to deal with the scorching Delhi summer. “The protests are going to go on for long; the one thing our farmers don’t lack is determination. They were here when it was extremely cold; they’ll manage in the heat too. The more you push them down, the stronger they’ll emerge. They’ve seen days where the government shut off the internet. The supply lines of food, water, electricity were cut. They still stand tall.”   Singh, who has a three-year-old child, misses his family back in the US. “It’s hard to be here without my family, but the people here need me more. The farmers of this country feel their livelihood is being threatened. The narrative being spread that these people are terrorists breaks my heart. They are simple people fighting for their rights. All they need is our support. I’m going to serve at these borders for as long as the protests go on because if I don’t, no one will,” he says.  To donate, visit: https://www.5riversheart.org/