This social worker from Lucknow cremates Covid-19 victims for free

After losing her best friend, Versha Verma hired vehicles and turned them into hearses to carry the dead, often shunned by their own family In mid-April, 42-year-old Versha Verma lost her best friend who was battling with Covid-19 at Lucknow’s Ram Manohar Lohia Hospital. Her body kept lying in the morgue for some hours because there was no transportation available to carry it to the crematorium. Those who agreed were asking for prohibitive sums of money, which the family couldn’t afford.
The incident struck Verma, a social worker who was helping the underprivileged since the pandemic began. Next day, she rented an Omni van, hired a driver and headed to the same hospital with a placard which read, “Nishulk Shav Vahan” (free vehicle for carrying the dead).
“I had no plan. I just knew I have to help and no one should go through more dilemma while they’re already struggling emotionally after losing their loved ones. On the first day, we cremated five bodies and couldn’t fulfil many requests due to limited resources. My number went viral and I started getting many calls. Looking at the demand, I rented three more vans over the next four days,” says Verma. From packing the body to loading, driving and unloading it again at the crematorium, Verma manages everything with a team of 12 paid volunteers. “Initially it was very difficult. It’s not easy to wear a PPE kit and perform all these tasks in scorching heat plus cremating with 80 more bodies alongside. It is scary.”
In 2015, Verma started her NGO called Ek Koshish Aisi Bhi to help the needy and provided ration, hospital treatment, and education to the underprivileged. As part of her work, she would also cremate the destitutes. In the last three years, she has cremated over 600 bodies, but just during the course of the pandemic, the number clocked 200. There are days when Verma has to stay at the crematorium even past midnight. 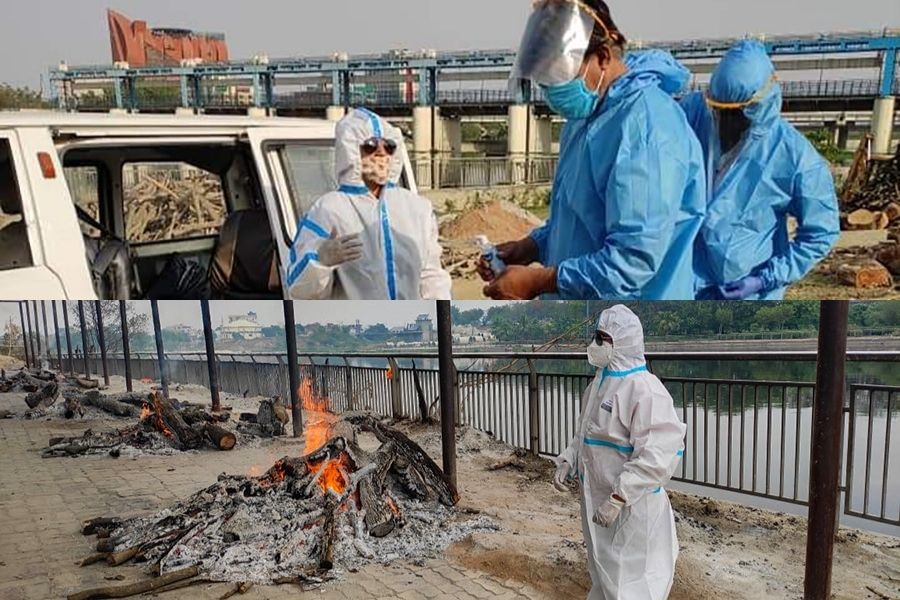 “One of the politicians from Uttar Pradesh gifted us an ambulance and then we started ferrying patients to the hospitals. Apart from this, we distribute 350 food packets per day, and free water outside crematoriums, besides feeding animals as well,” says Verma who decided to start the water drive after she noticed how the vendors outside the Gulala Ghat and Baikunth Dham were asking for hefty charges for one bottle.

Despite manoeuvering such death and devastation every day, there are incidents that throw Verma in a pool of swirling grief. One such was the day she was driving the wife and 17-year-old daughter of a Covid victim to perform his last rites. “The girl was constantly crying; I turned around and asked her to be a little strong. She turned back to me and said, ‘Only two of us from our family of five now remain.’ Pointing at her father, she said, ‘Yesterday, he cremated my younger brother and today we’re cremating him. Sometime ago, we received the news that my elder brother also passed away in the hospital. Once we are done with my father, we will have to cremate my elder brother as well.’ I didn’t know what to say. I couldn’t eat or sleep that day.”
But then she girdles up to alleviate the pain of families that have lost lives as well as livelihoods. For instance, she purchases food packets from underprivileged families that need to earn and distributes those for free. During the first wave, Verma distributed gas cylinders, ration and medicines to help the migrant workers.
Every day before going to bed Verma writes about her thoughts on the incidents she has encountered. “I’m passionate about writing. I make sure I pen down my thoughts before I go to sleep, because only then do I feel relieved. This is like a booster shot for the next day.”
Times are so tough that even family members of the deceased don’t want to come near the body, says Verma, and approach her for help instead. The team also receives requests from family members who are abroad or far away and cannot come to perform the last rites.
“This second wave of Covid-19 is attacking us mentally more than physically. People are scared, which is understandable, but we shouldn’t lose hope. Be strong and don’t shy away from helping people. These are the times of need and small help can do wonders. Take all the precautions and help people so that we can come out of this together,” says Verma.
For seeking help, donating or volunteering in Lucknow, contact Versha Verma at 8318193805

Tweets by @forbesindia
Future of Mobility—Gearing up for an EV-charged future: Tarun Mehta
How Naomi Osaka became everyone's favourite spokesmodel