The arid state of Rajasthan sees 325 sunny days each year, making it perfectly placed for the solar power revolution 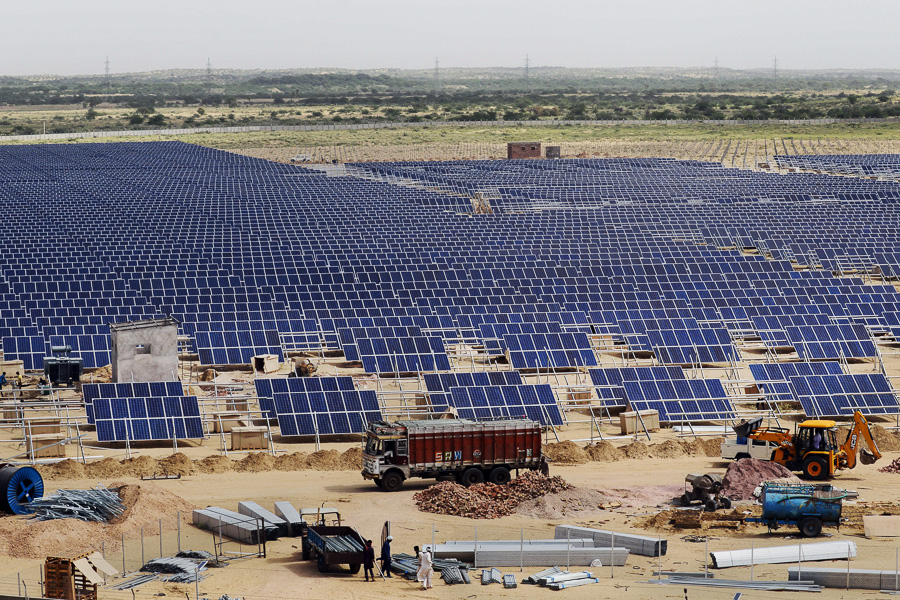 The arid state of Rajasthan, where Bhadla Park takes up an area almost the size of San Marino, sees 325 sunny days each year, making it perfectly placed for the solar power revolution, officials say. Image by Money Sharma/AFP via Getty Images

As camels munch on the fringes of Thar desert, an oasis of blue solar panels stretches further than the eye can see at Bhadla Park—a cornerstone of India's bid to become a clean energy powerhouse. Currently, coal powers 70 percent of the nation's electricity generation, but Indian Prime Minister Narendra Modi has pledged that by 2030, India will produce more energy through solar and other renewables than its entire grid now.

"First, India will increase its non-fossil energy capacity to 500 gigawatts... Second, by 2030, 50 percent of our energy requirements will come from renewable resources," Modi told the COP26 climate summit in Glasgow.

The arid state of Rajasthan, where Bhadla Park takes up an area almost the size of San Marino, sees 325 sunny days each year, making it perfectly placed for the solar power revolution, officials say.

Once an expanse of desert, authorities have capitalised on the sparsely populated area, claiming minimal displacement of local communities. Today robots clean dust and sand off an estimated 10 million solar panels, while a few hundred humans monitor.

This pursuit of a greener future is fuelled by necessity.

India, home to 1.3 billion people and poised to overtake China as the most populous country, has a growing and voracious appetite for energy—but it is also on the frontline of climate change.

In the next two decades, it has to add a power system the size of Europe's to meet demand for its swelling population, according to the International Energy Agency (IEA), but it also has to tackle toxic air quality in its big cities.

"India is one of the most vulnerable countries in the world for climate change and that is why it has this big push on renewables to decarbonise the power sector, but also reduce air pollution," Arunabha Ghosh, climate policy expert from the Council on Energy, Environment and Water, told AFP.

But experts say the country—the world's third-biggest carbon emitter—is some way from reaching its green targets, with coal set to remain a key part of the energy mix in the coming years.

Although India's green energy has increased five-fold in just over a decade to 100GW this year, the sector now needs to grow by the same proportion again to meet its 2030 goals.

"I believe this is more of an aspirational target... to show to the world that we are moving in the right direction," Vinay Rustagi from renewable energy consultancy Bridge to India, told AFP.

"But it would be a big stretch and seems highly unrealistic, in view of various demand and supply challenges," Rustagi said.

Proponents point to Bhadla Solar Park, one of the largest in the world, as an example of how innovation, technology, and public and private finance can drive swift change.

"We've huge chunks of land where there's not a blade of grass. Now you don't see the ground anymore. You just see solar panels. It's such a huge transformation," Subodh Agarwal, Rajasthan's additional chief secretary for energy, told AFP.

Authorities are incentivising renewables firms to set up in the region, known as the "desert state". Agarwal says demand has "accelerated" since 2019.

"It will be a different Rajasthan. It will be the solar state," he said of the next decade.

If this surge is sustained then coal-fired power for electricity generation could peak by 2024, according to Institute for Energy Economics and Financial Analysis (IEEFA) projections.

Currently, solar power accounts for four percent of electricity generation. Before Modi's announcement the IEA estimated solar and coal will converge at around 30 percent each by 2040 based on current policies.

India's billionaires, including Asia's two richest men Mukesh Ambani and Gautam Adani, are pledging huge investments, while Modi is setting up a renewables park the size of Singapore in his home state of Gujarat.

Show me the money

Around 80 percent of India's solar panels are still imported from China, the world's biggest producer.

Gyanesh Chaudhary, chief executive of Indian panel manufacturer Vikram Solar, insisted there should be "more than 30" local firms like his already.

"That's the kind of demand (and) ecosystem that India would essentially need... It should have happened sooner."

"A lot of these plants are located at very long distances from power stations, so you have to think of linking them," explained Apurba Mitra, World Resources Institute India's climate policy chief.

Modi, who announced at COP26 that India would be carbon neutral by 2070, made it clear that such emissions-cutting pledges would require finance from rich, historic emitters.

"India expects developed countries to provide climate finance of $1 trillion at the earliest. Today it is necessary that as we track the progress made in climate mitigation, we should also track climate finance," he told more than 120 leaders at the critical talks.

Farmer and doctor Amit Singh's three-acre family farmland in Rajasthan's Bhaloji village was running out of water and hit by frequent power outages.

"I always saw the sun and its rays and wondered... why not harness it to generate electricity?," he said.

Singh first installed rooftop panels at his small hospital which generated half of its energy needs.

He then invested family savings into a government-linked project on his land.

"It's the ultimate source of energy, which is otherwise going to waste... I feel I'm contributing to the developmental needs of my village," he added.

Ghosh said it was vital to bring down costs.

"When a farmer is able to generate power from their solar plant near their farm and pump out water—we are then able to bring the energy transition closer to the people," he added.

Pratibha Pai, the founder-director of Chirag Rural Development Foundation which has brought solar to more than 100,000 villagers, believes in clean energy's transformative role.

She said: "We start with solar power... we end with safe drinking water, power for dark village roads, power for little rural schools which will hopefully script the story of a 'big' India."

Tweets by @forbesindia
India sets net-zero target at 2070: A look at other climate targets announced by PM Modi
When man meets machine: Using AI to improve productivity of factory workers