Inspired by the Swedish activist Greta Thunberg and by Pakistani education rights champion Malala Yousafzai, Francisco became an environmental activist at the age of nine, in March 2019, when he saw images of wildfires scorching across the Amazon and the forests of Australia 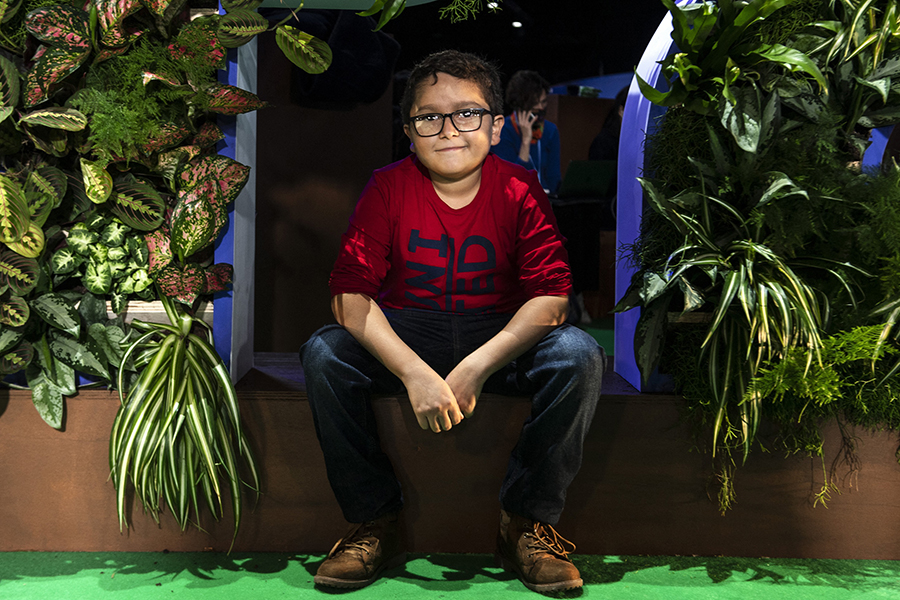 Wearing a confident smile and an oversized hoodie, 12-year-old Francisco Javier Vera climbed onto a table and told cheering COP26 protesters of the activism that has earned him death threats.

The bespectacled school boy has become something of a sensation in his native Colombia, where he has earned a following for his charismatic championing of the environment and human rights.

Francisco, who stands just 1.4 metres (4 feet and six inches) tall, does not think his youth should diminish his voice.

"But they don't allow us to express it."

He speaks quickly and passionately, with dramatic gesticulation to emphasise his point: there are few other children at the COP26 venue.

Francisco became an environmental activist at the age of nine, in March 2019, when he saw images of wildfires scorching across the Amazon and the forests of Australia.

Inspired by the Swedish activist Greta Thunberg and by Pakistani education rights champion Malala Yousafzai, he announced to his parents that he wanted to found a movement.

"When I arrived home that night, he had already compiled a whole database of contacts for people in the neighbourhood," said his mother Ana Maria Manzanares, a social worker.

She has since quit her job to devote time to supporting her son.

His father, a lawyer, initially objected fearing repercussions, but relented and ended up buying his son a megaphone.

He and six friends gave a speech outside the mayor's office in Villeta, his small town in the department of Cundinamarca, about 90 km from Bogota.

Francisco, who has an eloquence beyond his years, was already accustomed to public speaking, having given a talk to older children about the astrophysicist Stephen Hawking when he was eight.

"Many people ask if I have been trained to speak in this way, or to improve my vocabulary, but I think the most important thing is to let your ideas flow," he said.

His group has grown, with about 400 children now involved, organising Friday civic action, like litter picking.

By December 2019, just months after he decided to become an activist, he was delivering a speech to the Colombian Senate against fracking and single-use plastics.

The unruly legislators drummed on their chairs to show their disapproval, he said.

Nevertheless, Francisco is increasingly invited to take part in events with figures such as the Timorese Nobel Peace Prize winner Jose Ramos-Horta.

He has skipped school to travel to COP26, but said he preferred "to miss a week of class to be with all the presidents of the planet".

"Greta said if we have neither a present nor a future we will not be able to study, so this is a priority," he said of the climate change conference.

He is attending the gathering as a "goodwill ambassador" for the European Union's Euroclima+ programme, which promotes sustainability in Latin America.

Speaking at COP26 "is very different from living where climate change is happening," he said, adding that even during his short life he has seen biodiversity loss in the lush Villeta waterfalls region.

World leaders must focus "not only on climate but for a dignified life, an education, health, human rights", he said.

"It saddens me that politicians do not listen to citizens."

His mother acts as a "containment barrier" against the avalanche of people who approach him.

He has received death threats online for asking for connectivity for all children so that they could study at a distance.

"In Colombia one always knows that this is a possibility", said Ana Maria.

Francisco does not want to talk about the threats, but he said the response from allies was a chance to "see that you have support".

When he grows up he wants to be a politician.

But in the meantime he said his hobbies include playing basketball with his friends and loves video games like Minecraft, and Assassin's Creed, like "a totally normal boy".

Tweets by @forbesindia
Cash is still king five years after demonetisation
CLOUDSEC 2021: Reimagining and Redesigning Cybersecurity for A Cloud-Driven Future