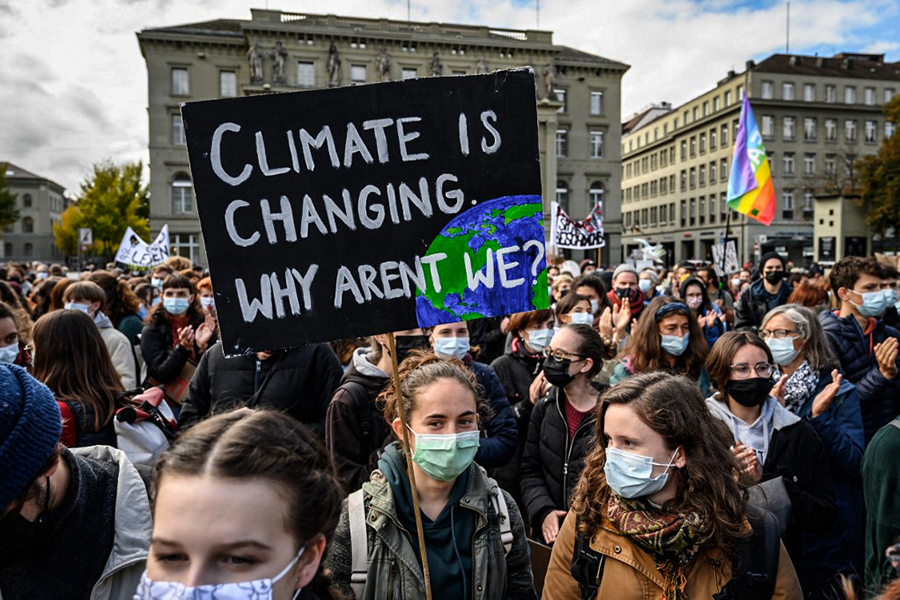 A activist holds up a placard during a climate strike demonstration ahead of the World Climate Conference in Glasgow, in front of the Swiss House of Parliament in Swiss capital Bern on October 22, 2021.
Image: Fabrice Coffrini / AFP

The world’s countries have begun to make meaningful progress in the fight against climate change over the past decade, new data shows, thanks to a rapid expansion of clean energy. Yet the planet is still on track for dangerous levels of warming in the years ahead unless those efforts accelerate rapidly.

As leaders from around the globe gather in Glasgow, Scotland, for a pivotal United Nations climate summit next week, the focus will be on how much hotter the Earth will get and how to keep that number as small as possible.

Humans have warmed the planet 1.1 degrees Celsius (2 degrees Fahrenheit) since preindustrial times, largely by burning coal, oil and natural gas for energy and by cutting down forests, which help absorb the planet-warming emissions created by fossil fuel use. Humanity is already paying a high price: This year alone, blistering heat waves killed hundreds of people in the Pacific Northwest, floods devastated Germany and China, and wildfires raged out of control in Siberia, Turkey and California.

The World Meteorological Organization warned this week that the amount of heat-trapping greenhouse gases in the atmosphere reached a record high last year and is rising again this year. Scientists say that every additional fraction of a degree of warming will exacerbate extreme weather and other risks around the globe.

So, how much hotter could things get?

To figure that out, scientists at Climate Action Tracker, a research group, regularly scrutinize all the climate and energy policies that countries have enacted worldwide. They then estimate the effect of these policies on future greenhouse gas emissions and calculate how much of a temperature increase the world can expect.

It is a simple measure of progress to date in combating climate change. And the data offers reasons for both hope and alarm.

In 2014, Climate Action Tracker estimated that the world was on track for nearly 4 degrees Celsius of warming by 2100, compared with preindustrial levels.

Warming of 4 degrees has long been deemed a worst-case scenario. One assessment by the World Bank explored the risks, such as cascading global crop failures, and bluntly concluded that 4 degrees “simply must not be allowed to occur.”

This year, however, Climate Action Tracker painted a more optimistic picture, because countries have started doing more to restrain their emissions. Current policies put the world on pace for roughly 2.9 degrees Celsius of warming by 2100. (That is a best estimate; the potential range is between 2.1-3.9 degrees Celsius.)

“There has been a genuine shift over the past decade,” said Niklas Höhne, a German climatologist and founding partner of NewClimate Institute, which created the Climate Action Tracker. “You can say that progress has been too slow, that it’s still not enough, and I agree with all that. But we do see real movement.”

There are several reasons for the improved outlook.

In 2015, 195 nations signed the Paris climate agreement, which for the first time required every country to submit a plan for curbing emissions. While the plans were voluntary, they helped spur new actions: The European Union tightened caps on industrial emissions. China and India ramped up renewable energy. Egypt scaled back subsidies for fossil fuels. Indonesia began cracking down on illegal deforestation.

Just as importantly, clean energy advanced far more quickly than predicted. A decade ago, solar panels, wind turbines and electric vehicles were often seen as niche technologies, too expensive for widespread use. But costs have plummeted.

Today, wind and solar power are the cheapest new source of electricity in most markets. Electric vehicle sales are setting records. Automakers like Ford and General Motors are now preparing to phase down sales of gasoline-powered cars in the years ahead.

At the same time, coal power, a major source of emissions, has begun to wane. A decade ago, China and India were building new coal-burning power plants nearly every week. But as cleaner energy alternatives have matured and climate activists have ratcheted up pressure on banks and governments to stop financing coal, that pace has slowed; after the Paris agreement, one recent study found, 76% of proposals for new coal plants have been canceled.

That would put the world on pace to warm a bit less than 3 degrees by 2100, although there are still uncertainties around whether current policies will work as intended and how sensitive Earth’s climate actually is to our greenhouse gas emissions.

Still, scientists warn, that number is not something to celebrate. Yes, 3 degrees is far less nightmarish than 4 degrees. But it is immensely dangerous.

Consider the vast ice sheets atop Greenland and West Antarctica, which together hold enough water to raise global sea levels nearly 40 feet and sink many of the world’s great coastal cities. The Intergovernmental Panel on Climate Change recently warned that at sustained global warming levels between 2-3 degrees, those ice sheets could melt irreversibly for thousands of years until they are almost entirely gone, condemning future generations to massive, relentless sea level rise for centuries to come.

“We know there are these big tipping points in the climate system, and once we get past them, it’s too late to go back,” said Andrea Dutton, a climate scientist at University of Wisconsin-Madison who co-authored a study finding that a 3-degree trajectory could lead to an abrupt jump in the rate of Antarctic melt as early as 2060.

As governments have awakened to the danger, they have vowed to do more. But so far, their promises often just exist on paper.

Before the Glasgow summit, at least 140 countries have formally updated their plans to curb emissions through 2030, according to the World Resources Institute. The United States and European Union pledged to pursue deeper cuts. Argentina and South Africa promised to slow future growth in fossil fuel use. But other major emitters, like China and India, have yet to formally update their short-term plans.

If countries follow through on these new pledges, Climate Action Tracker estimates, the world could potentially get on track to hold warming to around 2.4 degrees Celsius by 2100, although temperatures would keep rising thereafter.

But that is a big if.

Many pledges are not yet backed up by concrete policies, and countries are not all on track to meet them. One recent study by the Rhodium Group found that even if the Biden administration implemented a sweeping package of climate measures — including hundreds of billions of dollars in clean energy spending that remains stalled in Congress — and individual states adopted tougher rules of their own, the United States would barely stay on track to meet its target.

Even as humanity has chipped away at the climate problem over the past decade, scientists have made progress, too. And their findings are dire: They have gathered stronger evidence that even small temperature increases can be powerfully damaging.

In other words, the goal posts have moved.

When the Paris agreement was signed, nations agreed that they should keep total global warming “well below” 2 degrees Celsius and make a good-faith effort to stay at 1.5 degrees. But in the years since, a slew of studies have found that 2 degrees of warming is vastly more harmful than 1.5 degrees.

That extra half-degree sounds small, but it could mean tens of millions more people worldwide exposed to life-threatening heat waves, water shortages and coastal flooding. A half-degree may mean the difference between a world with coral reefs and Arctic summer sea ice, and a world without them.

Yet 1.5 degrees is a vastly harder target to hit than 2 degrees or 3 degrees. It is not nearly enough for global emissions to peak in the next few years and then decline gradually. Instead, global fossil fuel emissions would have to plunge roughly in half this decade and then reach net zero by around 2050.

This year, the International Energy Agency laid out a road map for what that might look like. By 2030, electric vehicles would have to make up more than half of new car sales globally, up from just 5% today. By 2035, wealthy countries would have to shut down virtually all fossil fuel power plants in favor of cleaner technologies like wind, solar or nuclear power. By 2040, all of the world’s remaining coal plants would have to be retired or retrofitted with technology to capture their carbon emissions and bury them underground. New technologies would be needed to clean up sectors like air travel.

The United Nations warned Tuesday that the latest round of climate pledges that countries submitted before Glasgow would collectively produce just one-seventh of the additional emissions cuts needed this decade to help limit total global warming to 1.5 degrees Celsius. Without an immediate and rapid acceleration of action, that climate goal could be out of reach within a few short years.

“The pathway is extremely narrow,” said Fatih Birol, executive director of the International Energy Agency. “We really don’t have much time left to shift course.”