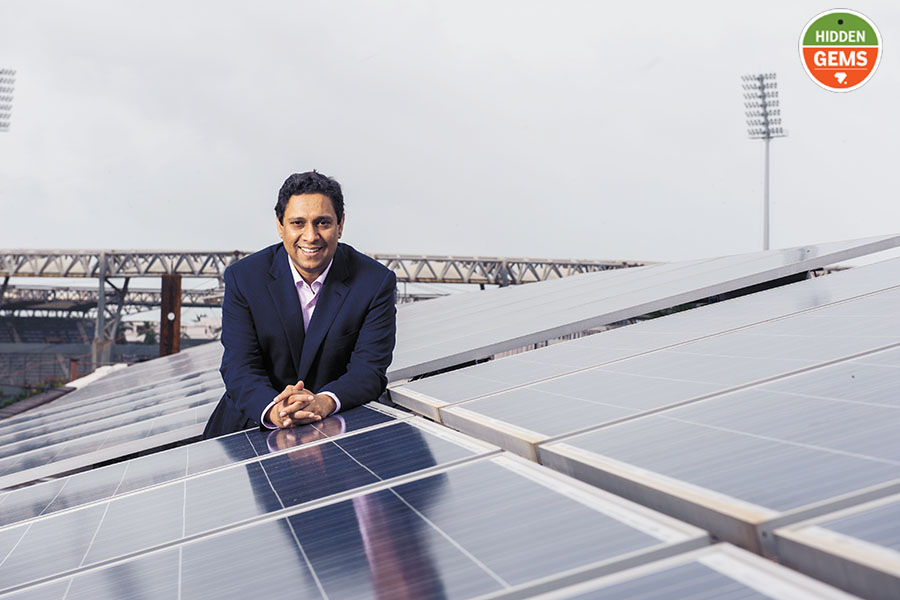 Kuldeep Jain wants to make it impossible for people to say no to green
Image: Mexy Xavier

About four years after Kuldeep Jain had set up CleanMax Enviro Energy Solutions in 2011, the head of sustainability of one of its largest clients—a data centre service provider—told them that CleanMax had had a negligible impact on the company’s sustainability agenda.

CleanMax Enviro, which operates under the brand name CleanMax Solar, had until then been setting up solar rooftop plants for companies on an operating expenditure model: CleanMax invested in, built and maintained the plant on a company property while the latter paid for the electricity consumed. The model had been arrived at because companies usually did not want to expend capital towards non-core functions. This way, clients could meet their sustainability goals as well as save on energy costs. “My ambition was to make it impossible for people to say no to green,” says Jain, 44, founder and MD.

Data centres are huge consumers of power and the solution to provide more power—and thus have them offset a larger carbon footprint—would be to set up a plant off site. Says Jain, “I told the client that I’m not sure as a company how to buy a lot of land, evacuate the power, deal with farmers and so on. And the client told me, ‘Look, you have to figure out if you are in the business of meeting a client need, or if you are in the business of not buying land’.”

It led to a pivot for the company in 2015—getting into offsite solar parks. “It’s not that we have a core skill of climbing the roof, we are sustainability partners, we can do multiple products, we can hire the best people to learn what we don’t know, but it has to be done. So we got into offsite solar power parks,” says Jain. The company has since set up a network of solar farms in Karnataka and Tamil Nadu, having acquired around 1,400 acres for five plants.

When Jain, who was a global partner at McKinsey & Company heading the energy and corporate finance division, turned entrepreneur in January 2011, he started with gas-fired cogeneration. At that point, gas was cheap and the cost of energy from a rooftop solar power plant was about 50 percent more than from the grid. But that didn’t quite work out because over the next 12 months, gas prices doubled after the Fukushima nuclear disaster in Japan. On the other hand, solar prices had come down.

Jain decided to move to solar. The trend of renewable energy getting cheaper every year by 3-5 percent has continued even as grid-based power suffers from inflation. Besides, points out Jain, in 2014, no state in India had a net-metering policy (which enables excess energy generated to flow into the general grid), but by 2016 almost every state had one. With more and more companies going green, adoption of solar has been on an upswing, leading the company to grow from 24 MW in 2015 to 520 MW in 2019 with plans to touch 2 GW in three years. Though there is plenty of competition, including Amplus Energy, which was acquired by Malaysia’s Petronas, CleanMax’s headstart has held it in good stead. According to the Mercom India 2019 report, CleanMax Solar was the top rooftop solar installer with a market share of 6.5 percent in 2018. 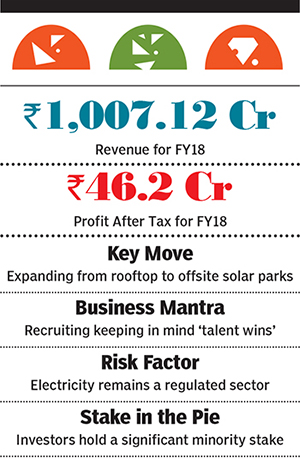 The company saw its revenues rise from ₹116.49 crore in FY16 to ₹291.54 crore in FY17 and further ₹1,007.12 crore in FY18 on the back of client demand and funding. “CleanMax had a high number of projects commissioned for group captive as well as third party corporate customers in FY18,” says Jain. The company is looking at a projected revenue of ₹350-400 crore for FY19.

It has set up over 450 projects and counts the Tata Group, Mahindra Group, TVS Group, Adobe India, United Breweries, Volvo India, ACC, SKF and Manjushree Technopack among its clients.

“Companies like CleanMax Solar, with whom we have partnered since 2014, are helping us further our green strategy by providing scalable and sustainable solutions to address our growing power needs responsibly,” says Sumit Mukhija, CEO, STTelemedia GDC India.

Manjushree Technopack tied up with CleanMax in 2016 and draws energy from their Karnataka plant for its south India unit. “CleanMax was the obvious choice. We had seen the setup; it is professionally run. It was also giving us cost-saving benefit without any capital commitment,” says Sanjay Kapote, CEO.

CleanMax had already established a name for itself by the time Warburg Pincus invested in the startup. “Being a pioneer in the rooftop solar model for C&I (commercial and industrial) customers in India, CleanMax was identified as the leading choice for rooftop solar project installations. Given its leadership position, we believe the company could become a market leader leveraging the fast-growing C&I segment over the next four to five years,” says Anant Jain, principal, health care, industrial and business services at Warburg Pincus.

CleanMax has raised three rounds of institutional equity funding: $100 million from Warburg Pincus and the International Finance Corporation in 2017, and $40 million from UK Climate Investments in 2019.

Its pan-India presence is another factor that has helped it grow—they have offices in six cities. In 2017, it also set up base in Dubai and last year in Thailand. The company is looking to expand through these to the Middle East and North Africa regions, as well as Southeast Asia.

Though challenges and risks of competition and policy uncertainty remain, Jain believes in looking at entrepreneurship with a 10-year outcome rather than short-term ones. And CleanMax, with its 25-year maintenance contracts, has clearly built credibility for the long term.