Frédéric Arnault, the 26-year-old chief executive of TAG Heuer and the fourth child of Bernard Arnault, may be the youngest CEO of a luxury watch brand in the world 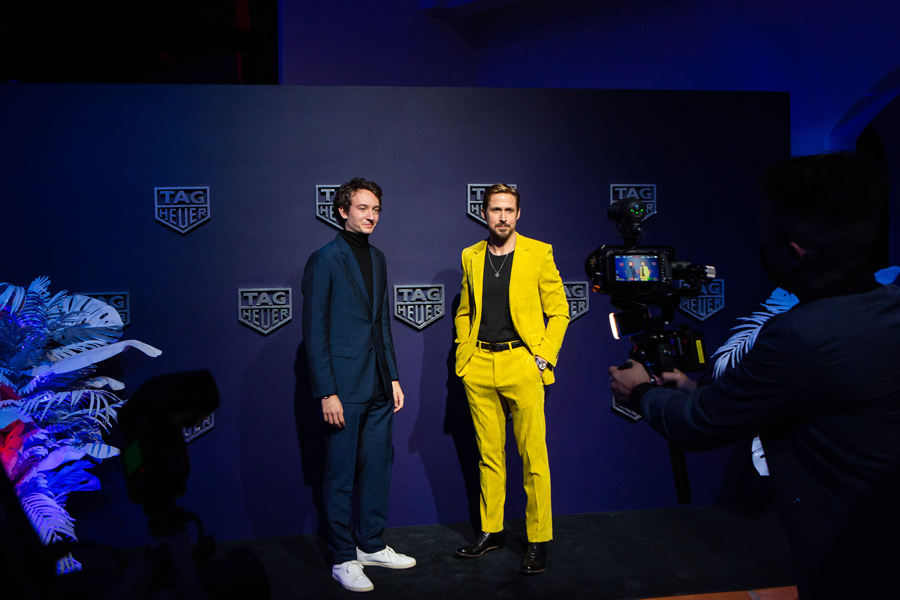 PARIS — Frédéric Arnault, the 26-year-old chief executive of TAG Heuer, may be the youngest CEO of a luxury watch brand in the world. He may be the fourth child of Bernard Arnault, the third richest man in the world and the chairman of LVMH Moët Hennessy Louis Vuitton, the largest luxury conglomerate in the world (owner of TAG Heuer as well as Dior, Givenchy, Bulgari and more than 70 other brands).

He may also be the fourth child to join that family business. He may have very grand ideas about how big his particular watch brand can become. And his father, 72, who is known for his aggressive acquisition tactics, may have famously dynastic intentions when it comes to the group he has built.

But do not mention the word “Succession” within anyone’s earshot. (Well, not unless you want to invite a lot of eye rolls and annoyance.)

As Frédéric becomes the latest Arnault to enter the spotlight, thanks to a very public partnership with actor Ryan Gosling that was introduced earlier this month at a celebrity-packed party in Beverly Hills — Arnault’s first big in-person event since taking command of TAG Heuer last year — the family wants to be very clear that this is not a story of Kendall Roy or Roman Roy or anyone remotely Roy-like.

No way. Uh-uh. No matter how much the outside world wants that to be the case. Which is why the newest power player in luxury’s first family is finally ready to open up.

Sitting in a conference room at 22 Avenue Montaigne, the art-filled headquarters of LVMH, Frédéric Arnault is wearing a navy suit and a white shirt, collar unbuttoned, and a redesigned TAG Heuer Aquaracer Night Diver, his thick brown hair standing more or less on end. (He has the hair of a piano maestro, which he is.). He is veritably animated discussing how he ended up at TAG Heuer and how he is changing the brand.

He can reel off statistics and models as fluently as he speaks English, Italian and German; wax lyrical about the watch factory in La Chaux-de-Fonds in Switzerland and the 150 steps it takes to build one dial; debate the virtues of mechanical versus connected (smart) watches; and enthuse over the 500,000 members of the TAG Heuer golf app linked to the company’s golf smartwatch with great enthusiasm.

In fact, he is much happier talking about his business than himself or his family. Though the two are pretty inextricable.

Frédéric Arnault’s first watch was a TAG Heuer Aquaracer, given to him on his 11th birthday by his father. The elder Arnault bought TAG Heuer in 1999 (the initials stand for Techniques d’Avant-Garde), and it is the largest watch brand in the LVMH portfolio. LVMH does not break out revenue by brand, but in its recent third quarter results, the watch and jewelry sector reported revenues of 6.16 billion euros ($7.1 billion) for the first nine months of the year.

Like his half-siblings from his father’s first marriage, Antoine (chief executive of Berluti, head of image and environment for the group, member of the LVMH board) and Delphine (executive vice president at Louis Vuitton, member of the LVMH board) and his older brother, Alexandre (executive vice president for product and communications at Tiffany) and younger brother, Jean (working in Louis Vuitton watches), Frédéric grew up with the company.

Still, when he was a child, he wanted to be an architect; at around 15, he settled on entrepreneur. When asked why, he looked startled and said, “That’s a very personal question.”

After school — Frédéric Arnault attended the École Polytechnique, France’s leading science and technology university (as did his father) — and following a stint running a mobile payment startup with a friend (sold after 18 months to the French investment firm BNP) while also moonlighting at TAG Heuer on the connected watch, he joined the brand full-time as the strategy and digital director.

Though he said he felt no parental pressure, the extent of his rebellious phase seems to have been opting to start in watches rather than fashion and leather goods. He did consult with his siblings about what to expect.

From the start, Arnault was being groomed to become the TAG Heuer CEO. His father “said report back when you think he’s ready,” said Stéphane Bianchi, who was brought in as TAG Heuer chief executive and head of the watch business not long after — in part to groom his successor. “And if you think he’ll never be ready, come back to me as well.” It was not, Bianchi acknowledged, the easiest transition.

“We clashed everywhere,” he said. “You can have a big brain and not be a leader. Now we laugh about it.” In June 2020, he handed over the reins to the then 25-year-old. (Bianchi moved up to head the watch and jewelry division.) Frédéric was the second-youngest Arnault to become a CEO, following Alexandre, who took over Rimowa at 24 when it was bought by LVMH.

“Frédéric changed a lot when he became CEO,” Bianchi said. “In the beginning he never felt any doubts. But he listens. Now he can admit when he is wrong.”

Beyond focusing on the connected watch, which now constitutes around 15% of all watch sales, Arnault has changed the retail-wholesale balance of TAG Heuer, moving it toward the former and doubling down on e-commerce, which grew 329% in 2020 and is forecast to grow a further 87% in 2021.

He also changed where the company put its money. When Arnault arrived, TAG Heuer’s biggest promotional investment was in soccer, but it turned out almost no actual consumers thought of TAG Heuer in connection with football; they thought of it in connection with Formula One. Arnault said he was going after a partnership with Porsche.

“He writes a letter to the chairman and gets no answer,” Bianchi said. “He writes to the VP for marketing: no answer. He invites them to see the company. He had three or four refusals before they even agreed to come and listen.” Last April, the deal was announced.

“He’s very resilient,” Bianchi said. (Arnault himself is not into racecars. He has a BMW Series 1.)

Arnault took the same approach to Gosling, whom he wanted partly because of the movie “Drive,” even though the actor was not an obvious celebrity ambassador: At age 40, he had never endorsed a product and had no social media presence.

“It’s unusual,” Arnault said, “but it means there’s a mystique around him.”

The deal with Gosling took about a year and half to negotiate and involved not just an endorsement but an agreement that Gosling would help art direct the campaigns and design his own watch (not for sale, but for himself). That was what swayed him, Gosling said.

“He told me he was not looking for a new ‘influencer,’ ” he said. Though it’s a two-year deal, both men said they were thinking long-term.

Like most of the Arnault children and like their father, Frédéric Arnault is a tennis player. He also likes golf, running and kite-surfing. He and one of his brothers often play doubles against their father and a pro. Though Bernard Arnault used to win, his son said, it generally goes the other way now. Bianchi favors squash, though, so the two had a match.

“Every point he was killing himself,” Bianchi said, though he wouldn’t say on the record who won. He did acknowledge that Frédéric Arnault said that the next time they played, it should be tennis.

“Competitive” is a word that comes up a lot in regard to Arnault. So is “calm” and “reserved.” “He’s like his father in that way,” Bianchi said. Alex Arnault and Antoine Arnault are generally categorized as the outgoing ones.

“He hates losing,” said Gregoire Genest, the friend from school with whom he founded his startup. “We usually bet on a match, like the loser has to do 50 push-ups. But he is generous when he wins about not making you do the push-ups, especially if we have been out late the night before. It makes him very good at negotiating. He knows just how far he can push people.”

Ask Frédéric Arnault what he does for fun and he says, “Business is fun!” though he laughs as he says it. He likes to play chess and backgammon. He loves math.

Also piano, which runs in the family. His mother, Hélène Mercier, is a concert pianist; his father and most of his siblings play. (Word is Frédéric Arnault may be the best, though he will only admit that he plays the most.) He is partial to Russian composers and Liszt. Before becoming CEO of TAG Heuer, he used to give concerts once a year and has played with the Moscow Philharmonic. Now, he said, “It’s hard to practice enough.”

Though he spends four days of the week in Geneva (where he lives in a hotel) and three in Paris (where he has a “very simple” apartment in the Seventh Arrondissement), Arnault eats dinner with his parents about once a week, and all of the siblings meet up for big family events. At Alex Arnault’s recent wedding in Venice to Géraldine Guyot, they were all best men (Beyoncé and Jay-Z came; Kanye West did too, and also performed.)

“Ninety-five percent of the time, we talk about business,” Frédéric Arnault said. “It was always like that. Growing up we talked about studies a lot, sport, music, politics, but business was still the main topic of discussion.”

Unlike his parents and older siblings, Frédéric Arnault is not yet collecting art — “I’m too young,” he said — though he does collect mentors. Bianchi was one; Thierry Breton, the former chief executive of France Télécom and the current European Union commissioner for the internal market, is another; and so is Tony Fadell, the principal at the investment firm Future Shape and a co-founder and former chief executive of Nest Labs (and inventor of the iPod and co-inventor of the iPhone).

Fadell and Arnault met when Frédéric was a teenager on a tour of Silicon Valley with his father. They stayed in touch and, said Fadell, who moved to Paris a few years ago, still talk regularly.

“I’ve seen my share of people trying to prove how great they are,” Fadell said. “He has the opposite problem: He has to prove he can be humble.”

Tweets by @forbesindia
Yes, there has been progress on climate. No, it's not nearly enough
Quartz, jade, amethyst: The stones taking over the beauty industry