'Why not us?': Latinos stuck at Mexico border ask as Ukrainians enter US

As Ukrainians who fled Russia's invasion have recently begun to cross the same frontier with little delay, many Latinos stuck waiting for months are wondering why they are not being treated the same 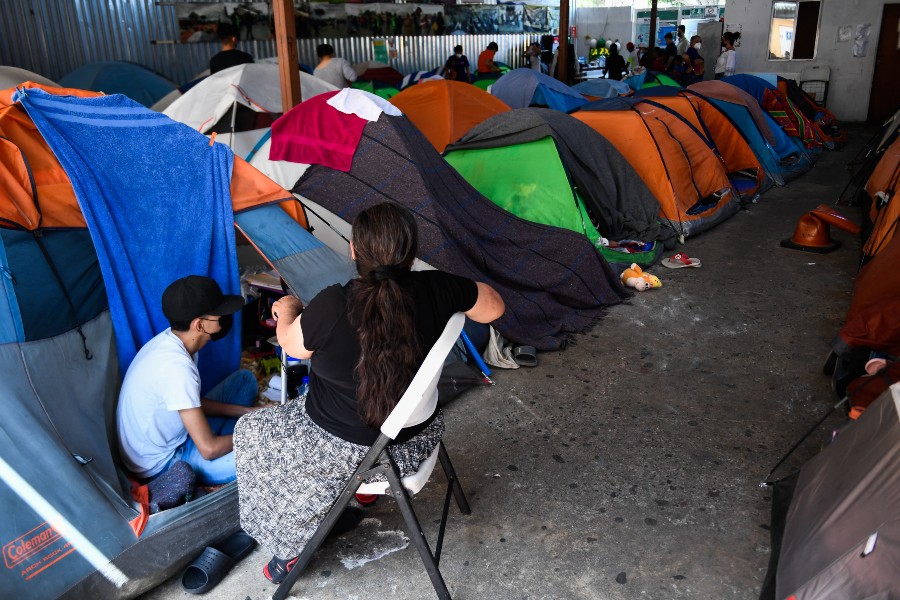 Thousands of Ukrainians have flown to Tijuana to cross the land border to the United States. (Credit: Patrick T. FALLON / AFP)

Tijuana, Mexico: Thousands of Latino refugees arrive in the Mexican city of Tijuana each year, dreaming of one day crossing the border that separates them from the United States.
But as Ukrainians who fled Russia's invasion have recently begun to cross the same frontier with little delay, many Latinos stuck waiting for months are wondering why they are not being treated the same.
"Why are we — neighbors of the United States — not given the same opportunity to seek asylum? We came here fleeing almost the same thing," said L., a 44-year-old Mexican man.
Because of the war raging in their homeland, Ukrainians have been granted special humanitarian permission to enter the United States. Washington said last month it would take in up to 100,000 refugees.
Thousands of Ukrainians have since flown to Tijuana to cross the land border to the United States — easier than getting the visa required to fly direct.

Volunteers in Tijuana and the neighboring US town of San Ysidro say that, on average, new Ukrainian arrivals wait just two or three days before crossing, using an entrance available only to them.
"I think we all deserve a chance," L.'s wife said, with tears welling up in her eyes.
The couple fled their central Mexican hometown of Irapuato with their three children, carrying only a change of clothes, after suspected cartel members torched their home and the bakery where they made their living.
Staring down at the floor and nervously clutching a piece of paper in her trembling hands, the woman spoke to AFP hesitantly, declining to give her name for fear of something happening to her or her family.
"We came here not by choice but out of necessity — we have endured a lot of violence," she said.
"We want to give them a better life," she added, pointing to her children, who are living in one of several tents at the Movimiento Juventud 2000 shelter.
The family are just three blocks from Unidad Deportiva Benito Juarez, which has become the staging post for thousands of Ukrainians.
"Why don't they give us a chance?" she asked.

The contrast between the two shelters could hardly be more stark.
At Movimiento Juventud 2000, the atmosphere is heavy with frustration and sadness, while at Benito Juarez, relief and hope abound.
Volunteers at the Ukrainian shelter have created a database to keep up with the rapid turnover of asylum seekers.
By Saturday afternoon, more than 2,600 Ukrainians had registered.
At Movimiento Juventud 2000, some families have been waiting as long as six months for a change in border restrictions that would allow them to apply for asylum.
R., who also did not want to give her full name, is from Honduras, and has five children aged between one and nine. She said they were forced to leave their city eight years ago when her journalist husband was attacked.
They fled to Guatemala, where her husband received medical treatment. But they realized they could not remain when one of the doctors who treated him was murdered.
Another attempt to rebuild their lives in Mexico was scuppered when a flood destroyed their new home, and so the family headed to the US border, encouraged by the election of Democratic President Joe Biden.
"We have been applying for asylum since we lived in Guatemala, but a long time has passed and we are still waiting," she said, sitting on a plastic bucket next to the tent in which the whole family has slept for months.
The youngest of her babies learnt to walk between tents.
Like the Ukrainians, "we also came fleeing," she said.
"It's different, but it's almost a war with the gangs... we can't go back."

Thanks to donations from both sides of the border, Ukrainian volunteers installed a children's play area at their shelter.
Toys, crayons and books are available, with a new crate of plastic yellow ducks arriving Saturday.
Nearby, young Haitian, Mexican and Central American children do not have any dedicated space and few materials, although they are entertained a couple of times each week by UNICEF workers and individual volunteers.
Teacher Nelly Cantu, who is part of that effort, says she was approached about helping at the Ukrainian shelter, but decided to stay put.
"Besides the language barrier, I preferred to stay here because the children need me. They have suffered a lot, and have less support. This is also a war," she said.
Some 125 people, mainly from Haiti and Central America, live in the shelter staffed by six people, said its director Jose Maria Garcia.
"We try to explain to them that they have to be patient," Garcia said.
By Paula RAMON
© Agence France-Presse