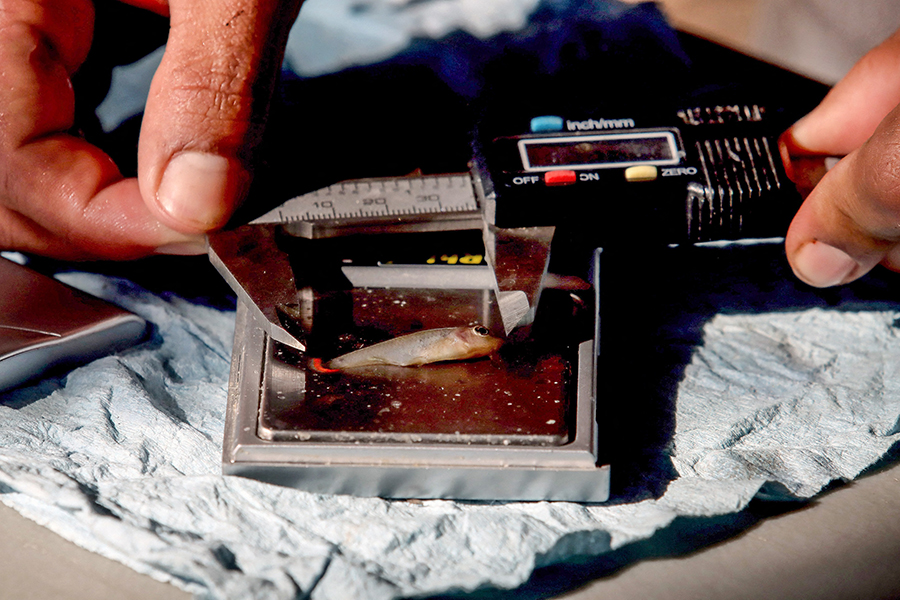 A biologist weighs and measures a Tequila fish (zoogoneticus tequila) during a survey of the species that was successfully reintroduced to its natural habitat
Image: Ulises Ruiz / AFP

Residents of a small town in western Mexico are celebrating the reintroduction into the wild of the tequila fish—an endemic species saved from the brink of extinction.

The fish, whose scientific name is Zoogoneticus Tequila, was rescued in the 1990s by US and British conservationists who kept it in aquariums and helped it return to its original habitat in the Teuchitlan river.

Children in Teuchitlan, home to about 10,000 people, have been at the forefront of efforts to inform visitors not only about the importance of keeping their habitat clean, but also about the tequila fish.

"The children are the ones who approach people on the river bank and tell them that in this river lives a little fish that is unique in the world... and that they participated in its reintroduction," said Consuelo Rivera, a 70-year-old retired teacher.

The tequila fish was reported to be extinct in 1998, possibly due to fragmentation of its habitat, pollution and competition from non-native species, according to the International Union for the Conservation of Nature (IUCN).

The species survived only in captivity for several years until conservationists, led by Michoacan University, began the process in 2014 to reintroduce it into the wild.

Since then the fish has gone from strength to strength, helped by the last major release of fish in 2018, said project leader Omar Dominguez.

The tequila fish grows to around seven centimeters (2.7 inches) and the male has a bright reddish-orange tail.

It shares the name of the world-renowned Mexican liquor originating in the town of Tequila, which like Teuchitlan is located in the state of Jalisco.

The species has unique characteristics such as giving birth to well-developed fetuses, which it feeds through a kind of umbilical cord similar to that of humans, Dominguez said.

"It's an important part of the ecosystem. It's a carnivorous species and it feeds, for example, on mosquito larvae, which keeps ecosystems healthy for humans," he added.

There are now estimated to be between 1,500 and 2,000 tequila fish in the wild, and the species is listed as endangered by the IUCN.

The civil society group Guardians of the River carries out educational campaigns and workshops for children and adults to shown them the flora and fauna of the area.

Tourism also plays an important role in the initiative.

Local visitors bathe in spa pools around the river said to have therapeutic properties, and swim with the fish—also known as "gallito" (little rooster) because of its colorful tail.

"There are a lot of little fish. They swim together with people and sometimes the little fish also start to bite people, to caress them," said Maria Aurea Martinez, a spa employee.

Jaime Navel, a local parish priest, sees the species as "the little fish that was resurrected, that came back to life."

"There's awe and joy in the community," he said.

Tweets by @forbesindia
Trash to treasure: Old flip flops get a makeover in Kenya
Crypto Simplified: Do your own research