Trash to treasure: Old flip flops get a makeover in Kenya

Ocean Sole says it recycles between 750,000 and one million flip flops a year and has created around 100 full-time jobs 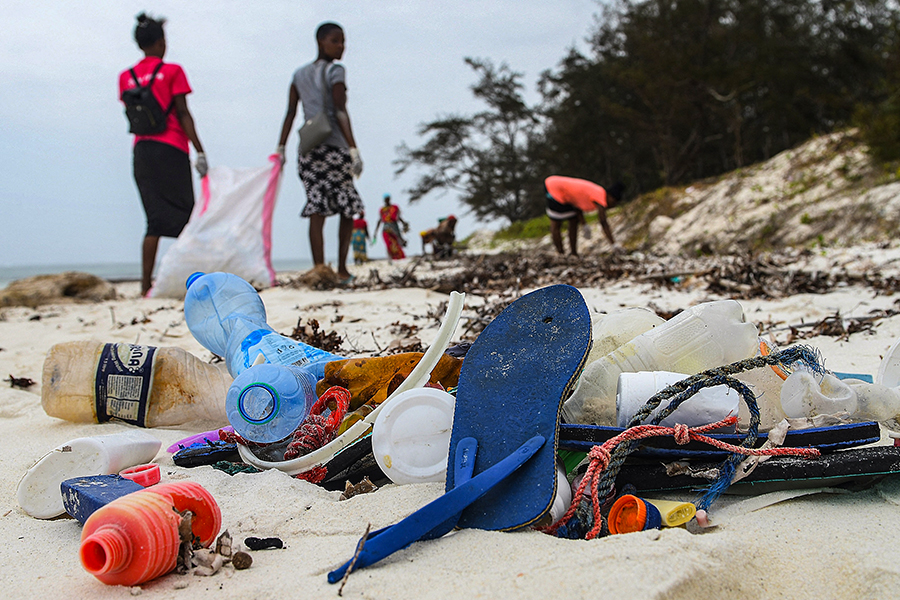 Tangled in seaweed, buried in sand, washed up in rock pools—tattered old flip flops are an eyesore on Kenya's beaches, flushed out of rivers or carried across the sea from Asia and beyond.

They are the footwear of choice for much of the world but cheap flip flops, like other plastic trash, are polluting oceans and pristine white-sand beaches like Kilifi on the Indian Ocean.

"Rich, poor, everybody has got a pair," said Lillian Mulupi from Ocean Sole, a Kenyan enterprise that recycles discarded flip flops and other plastic garbage found on beaches and waterways into colourful sculptures and children's toys.

"Since they're very easy to afford, when a pair is done you just throw it away and get a new one. So you get a lot of it ending up on our beaches."

The rising scourge of marine litter will be front and centre when negotiations for an international plastics treaty begin later this month at a UN environment meeting in the Kenyan capital.

Plastic has been found in the smallest of plankton and the largest of whales, and pressure is growing for an international agreement to tackle what has been called an ecological crisis.

Governments are being urged to agree on a treaty framework in Nairobi to curb plastic pollution "from source to sea" and to develop ways of reusing the plastic already in circulation.

Less than 10 percent of plastic is recycled, with most dumped in oceans and landfill.

From "the deepest ocean trench to the Arctic, you are finding plastics", UN Environment Programme executive director Inger Andersen told AFP in an interview this week.

The crisis is plainly visible in Kilifi, where enormous volumes of plastic bottle caps, toothbrushes, candy wrappers and flip flops were collected in a single hour by volunteers during a recent beach clean-up.

"We can collect as much as a tonne from a two-kilometre (1.2-mile) stretch of beach," said Mulupi, who organises regular clean-ups along the Kenyan coast involving about 150 volunteers.

One of them is Sally Adolwa, who finds garbage from across the globe in the quiet dunes that fringe her local beach.

"Trash has come from as far as India, the Philippines. Sometimes we are shocked," she told AFP.

Beneath a tree, sacks bulging with refuse are sorted into categories, with hard plastics and PET bottles put aside to be sold to recyclers.

The flip flops—mostly cheap, modern varieties made of foam and other plastic materials that mimic rubber—are purchased by Ocean Sole, allowing collectors to earn a little extra cash to support their families.

They are sent to a workshop in Nairobi, thoroughly cleaned, and glued together into multi-coloured slabs.

Off cuts and harder plastic unsuitable for sculpting are shredded into filler for mattresses, cushions and dog beds.

Plastic insulating Styrofoam salvaged from dumped refrigerators is used as a mould for larger works, including elephants and towering giraffes that can sell for many hundreds of dollars.

"Even we can do masterpieces that take about 2,000 flip flops," said production supervisor Jonathan Lenato.

Drop in the ocean

Flip flops aren't just sourced from the sea but rivers and canals in the slums of Nairobi, one of Africa's fastest-growing cities with a major landfill problem.

"We receive—weekly—about 1.2 tonnes. Turn this into a month, then a year... It's a lot of flip flops," said Lenato.

All in all, Ocean Sole says it recycles between 750,000 and one million flip flops a year, and has created around 100 full-time jobs.

But they are working against the tide: some estimates suggest between 19 and 23 million tonnes of plastic enter the world's waterways every year, a figure expected to sharply rise in coming decades without action.

The scale of the crisis is not lost on Lenato—never once in 16 years has he run short of raw materials to meet orders.

"We have to do something about our environment. We are encouraging people all over the world to do their part also," he said.

"We need to do recycling with our trash the best (we) can."

Tweets by @forbesindia
30 Under 30 2022: Special mentions to look out for
Mexican town toasts tequila fish saved from extinction