In nominating Jackson, Biden delivered on a campaign promise to select the first Black woman to serve on a court that was made up entirely of white men for almost two centuries 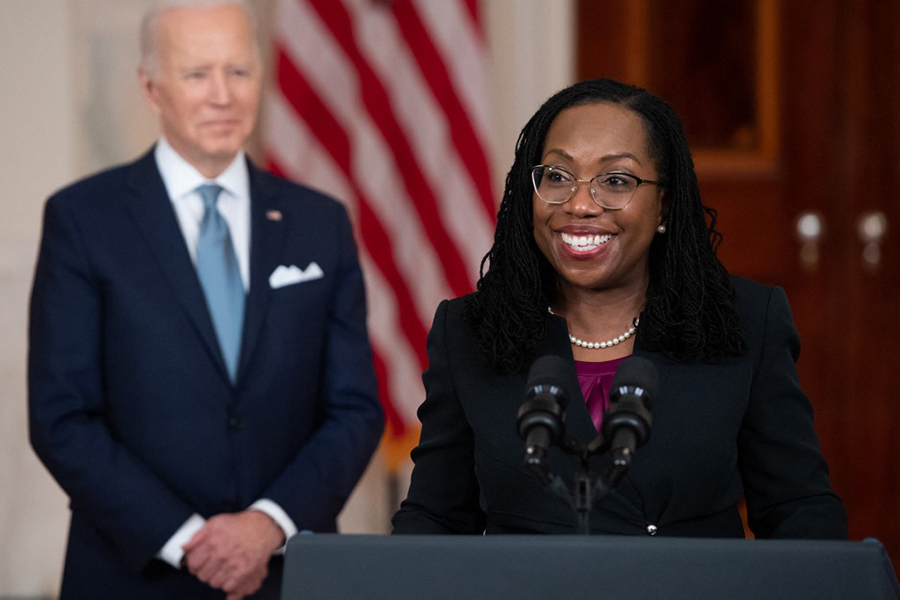 Ketanji Jackson is the only nominee of a Democratic president to be confirmed since Elena Kagan in 2010. Image: Saul Loeb/AFP

WASHINGTON (AP) — It's a moment 46 days — and more than 46 years — in the making.
President Joe Biden on Friday will celebrate the confirmation of Judge Ketanji Brown Jackson as the first Black woman to reach the Supreme Court, marking the pinnacle of her legal career and bringing his political story full circle.

As a longtime Senate Judiciary Committee chairman, Biden had a front-row seat to some of the most contentious confirmation battles in the Court's history, as well as the hearings for Justice Stephen Breyer, whose retirement this summer is clearing the way for Jackson to join the bench.
"This is a tremendously historic day in the White House and in the country, and this is a fulfillment of a promise the president made to the country," said White House press secretary Jen Psaki. She added that Biden's time on the Judiciary Committee "was defining for him and gave him historically exceptional preparation" for putting a justice on the court.
In nominating Jackson, Biden delivered on a campaign promise to select the first Black woman to serve on a court that was made up entirely of white men for almost two centuries, declared her race unworthy of citizenship and endorsed American segregation.
He also chose an attorney who will be the high court's first former public defender and who possesses the elite legal background of other justices as well, with degrees from Harvard and Harvard Law School and top clerkships, including for Breyer himself.
Jackson's arrival on the bench won't upend the current 6-3 ideological balance in favor of conservatives, but Biden sees the pick as historic nonetheless. He nominated her on the second anniversary of his pledge ahead of the South Carolina presidential primary to select a Black woman for the court. The move helped resurrect his flailing campaign and preserved his pathway to the White House.
"We've taken another step toward making our highest court reflect the diversity of America," Biden said in a tweet Thursday after posing for a selfie with the justice-in-waiting. "She will be an incredible Justice, and I was honored to share this moment with her."
Jackson had joined Biden at the White House to watch the Senate vote unfold on TV, the two of them clasping hands in the Roosevelt Room as her confirmation became reality.
"History doesn't happen by accident — it's made," said White House chief of staff Ron Klain. He took note on MSNBC of the vote on Brown's nomination being presided over in the Senate by Vice President Kamala Harris, the first Black vice president, also selected by Biden.
Throughout his 50 years in Washington, Biden has played an instrumental part in shaping the court, both inside and out of the Senate. But this was his first opportunity to make a selection of his own.
Biden may not get another chance. Senate minority leader Mitch McConnell, in an interview Thursday with Axios, refused to commit to hold confirmation hearings for a future Biden nominee to the high court if the GOP retakes control of the Senate in 2023.
Biden took part in confirmation hearings for Supreme Court nominees Sandra Day O'Connor in 1981 and Antonin Scalia in 1986, both nominated by President Ronald Reagan. He also participated in the 1986 hearing to elevate Justice William Rehnquist to the position of chief justice of the United States.
As committee chairman, he presided over the hearings for doomed nominee Robert Bork, then the successful confirmations of Anthony M. Kennedy, David Souter, Clarence Thomas, Ruth Bader Ginsburg and Breyer.
He was on the committee in 2005 but no longer chairman when now-Chief Justice John Roberts was confirmed to the court, and in 2006 when Samuel Alito became a justice.
As vice president, Biden helped counsel President Barack Obama on his three Supreme Court picks: Sonia Sotomayor and Elena Kagan, who were confirmed, and now-Attorney General Merrick Garland, whose nomination was blocked by the GOP ahead of the 2016 presidential election.
Jackson won't take office immediately. Breyer is set to step down after the court concludes its current term, which is usually in late June or early July. Only then will Jackson take the oath to become an associate justice. A White House official said Jackson will remain in her role on the Court of Appeals for the District of Columbia Circuit but will continue to recuse herself from cases.
Friday's celebratory event on the South Lawn of the White House comes amid a COVID-19 outbreak among Washington's political class that has sidelined members of Biden's administration and lawmakers, including Maine Sen. Susan Collins, who tested positive for the virus just hours after voting for Brown's confirmation.
Psaki on Thursday addressed concerns that the White House event could be a "super-spreader" for the virus, like President Donald Trump's Rose Garden ceremony announcing the nomination of now-Justice Amy Coney Barrett. Psaki emphasized that the risks from the virus are now much lower because of vaccinations and treatments.
"At that point in time, vaccines were unavailable, people were not vaccinated, it certainly puts us in a different space," Psaki said.
___
By Zeke Miller and Will Weissert. AP writer Darlene Superville contributed to this report.