Bridges blown up as Ukraine braces for Donbas assault

Since capturing Izyum a few days ago, Russian troops are camped around 20 kilometres (12 miles) to the north of the twin cities of Slavyansk and Kramatorsk, the capital of the Ukrainian controlled Donbas 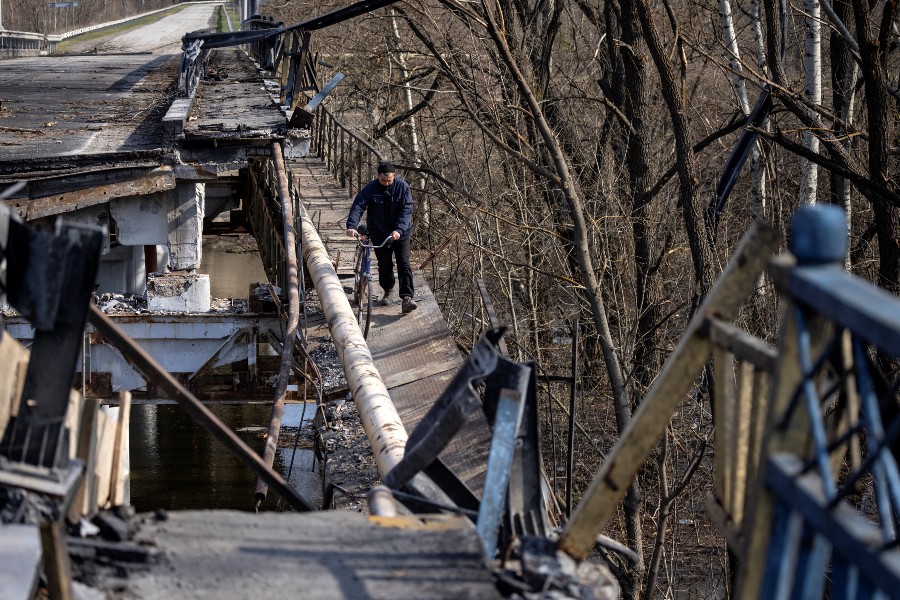 A man crosses a destroyed bridge near the village of Bohorodychne in the Donbass region on April 5, 2022. (Credit: FADEL SENNA / AFP

Krasnopillia, Ukraine: A highway through the rolling plains of eastern Ukraine looks set to play an important strategic role in the anticipated Russian offensive in the Donbas.
Connecting the regions of Kharkiv and Donetsk, the two-lane thoroughfare is one of the key routes in the northeast of the country.
The road runs like an arrow to the centre of the Ukrainian-controlled Donbas, caught between pro-Russian statelets of Donetsk to the south and Lugansk to the east, and the advance of Russian forces from the north.
"We're waiting for them!" said a lieutenant tasked with reinforcing the positions along the road, giving a thumbs up.
"We are going to destroy the enemy that came to invade our motherland. Fascist Russia, we can't describe it any other way. Who lives by the sword will die by the sword," says a young officer with a dagger strapped to his vest.

"If only Western countries would give us more vehicles, if only they would help us close the sky (to Russian planes). And victory will be ours."
The forest adjacent to the highway is dotted with springtime bluebells and camouflaged equipment alike.
Trench positions have been dug by a bulldozer, while the artillery and armoured vehicles have been largely covered with earth.
The road is littered with anti-tank obstacles. As winter reaches its end and the sodden terrain makes moving through the fields difficult, the army's aim is to control the asphalt.

Since capturing Izyum a few days ago, Russian troops are camped around 20 kilometres (12 miles) to the north of the twin cities of Slavyansk and Kramatorsk, the capital of the Ukrainian controlled Donbas.
According to the American think-tank the Institute for the Study of War, Slavyansk will be the site of "the next pivotal battle of the war in Ukraine".
Between Izyum and the Ukrainian-held city, the village of Krasnopillia, where elite Ukrainian troops are stationed, marks the frontline.
"The Russians are getting ready, we know they are preparing to attack," says a senior officer, noting the increasing activity of Russian helicopters, usually a sign of a large-scale operation.
"We are ready... we've planned some surprises for them along the way," says the officer, a veteran of the 2014 war with pro-Russian separatists.
A few kilometres to the east of the road, the Seversky Donets river, winding through pine-covered hills, represents a natural obstacle to the advance of the invader.
A number of the eight water reservoirs along the waterway have been opened by the Ukrainians to make passage across even harder.
"The level has risen by two metres," according to one local.
Crossings, like the one in Bogorodychne, a village where a few older residents remain, have been blown up.
"Everyone is nervous at the moment, the old people did not want to leave," says Artur Nazarov, 58, the head of a local school.
"It's the end of the line, we've made our provisions, we're waiting," he says, standing in front of the blown-up bridge.

A single bridge, three kilometres downstream in the usual tourist hotspot of Svyatogirsk, has so far been spared — though it too is mined and slated for destruction.
Flanked by hills, the "Holy Mountains" orthodox monastery — under the authority of the Patriarch of Moscow — used to attract pilgrims and visitors to its peaceful surroundings.
"When the Russians launch their assault, we will have an hour — two max — to evacuate to the west bank of the river," says a local commander in the territorial defence, Andriy Bezruchko.
Russian troops are a handful of kilometres away to the north and not necessarily in hostile territory.
"The population around here is 80 percent pro-Russian," says Andriy, 43, owner of a restaurant in Svyatogirsk.
"Of course the town is going to be taken. I am going to lose everything, my possessions, my house. Everyone knows me here, I'm threatened all the time," he says with a shrug, showing the death threats he has received on his phone.
The monastery is also the site of a surprising manoeuvre, an illustration of the complexities of the war in east Ukraine.
Each morning, people gather to travel towards the Russian-controlled zone, all with the tacit consent of the Ukrainian authorities.
"These people think they will be safe in the occupied territories," says Andriy.
In the afternoon, a convoy arrives from the Russian zone. Svyatogirsk is a corridor, a discreet place of contact where civilians can pass from one side to the other.
"Cars are moving in both directions, the choice is still there for everyone," Andriy notes.
By Hervé BAR
© Agence France-Presse