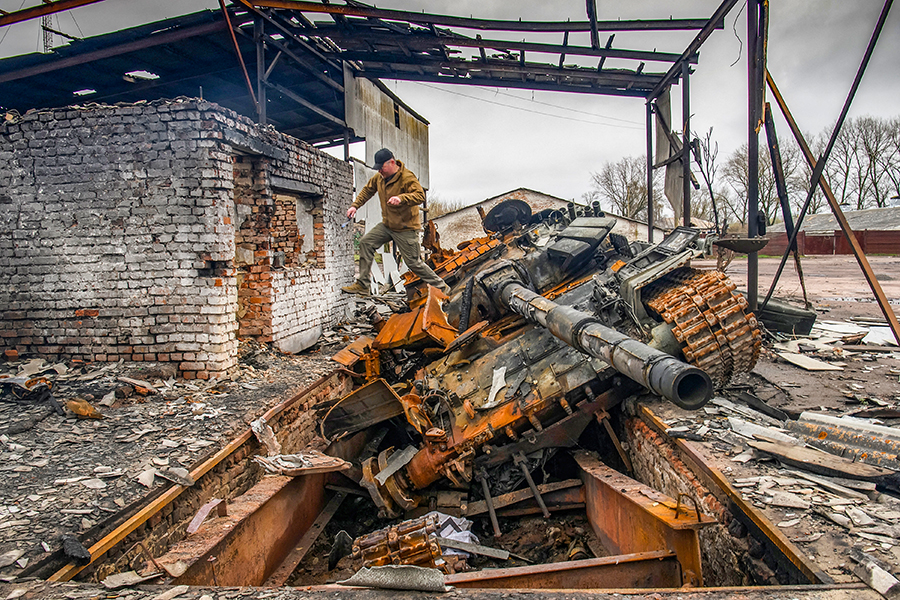 A man jumps from a Russian T-72 tank destroyed during Russia's invasion, in the village of Yahidne, Ukraine April 20, 2022. REUTERS/Vladyslav Musiienko

WASHINGTON — The United States has provided intelligence about Russian units that has allowed Ukrainians to target and kill many of the Russian generals who have died in action in the Ukraine war, according to senior American officials.

Ukrainian officials said they have killed approximately 12 generals on the front lines, a number that has astonished military analysts.

The targeting help is part of a classified effort by the Biden administration to provide real-time battlefield intelligence to Ukraine. That intelligence also includes anticipated Russian troop movements gleaned from recent U.S. assessments of Moscow’s secret battle plan for the fighting in the Donbas region of eastern Ukraine, the officials said. Officials declined to specify how many generals had been killed as a result of U.S. assistance.

The United States has focused on providing the location and other details about the Russian military’s mobile headquarters, which relocate frequently. Ukrainian officials have combined that geographic information with their own intelligence to conduct artillery strikes and other attacks that have killed Russian officers.

Officials interviewed for this article spoke on the condition of anonymity to discuss details of the classified intelligence being shared with Ukraine.

The administration has sought to keep much of the battlefield intelligence secret, out of fear it will be seen as an escalation and provoke President Vladimir Putin of Russia into a wider war.

Some European officials believe, despite Putin’s rhetoric that Russia is battling NATO and the West, he has so far been deterred from starting a wider war. U.S. officials are less certain.

Officials said Moscow has its own calculations to weigh, including whether it can handle a bigger war, particularly one that would allow NATO to invoke its mutual defense charter or enter the war more directly.

“Clearly, we want the Russians to know on some level that we are helping the Ukrainians to this extent, and we will continue to do so,” said Evelyn Farkas, the former top Defense Department official for Russia and Ukraine in the Obama administration. “We will give them everything they need to win, and we’re not afraid of Vladimir Putin’s reaction to that. We won’t be self-deterred.”

Tweets by @forbesindia
Deepti Prasad and Sanjay Kumar on the journey from a wedding site to an AI product venture with top-notch ecommerce customers
India finds Russian oil irresistible, no matter the diplomatic cost