They survived the holocaust. Now they are fleeing to Germany

The elderly and fragile, Ukraine's Holocaust survivors are escaping war once more, on a remarkable journey that turns the world they knew on its head: They are seeking safety in Germany 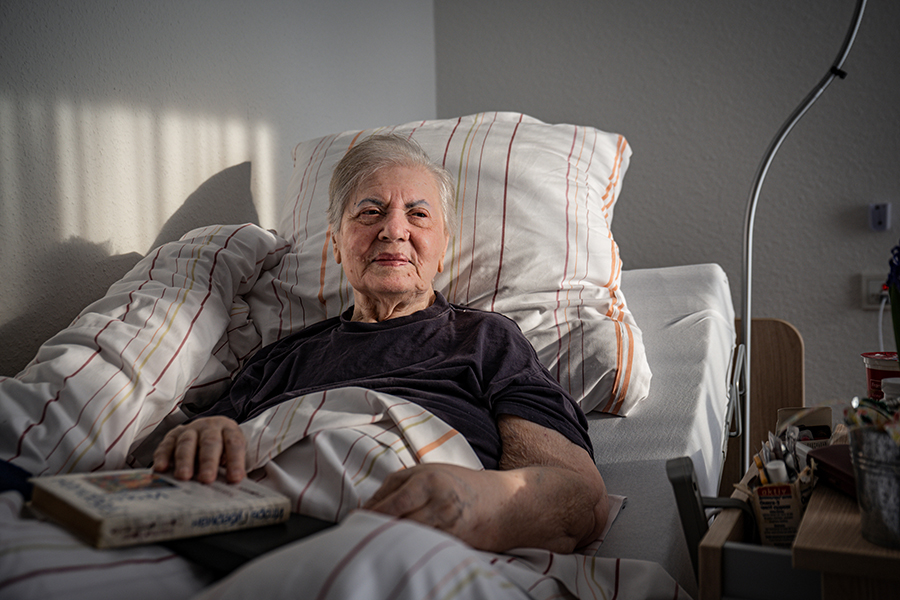 Galina Ploschenko, a Holocaust survivor from Ukraine, in her room at the AWO senior care center in Hanover, Germany, April 25, 2022. A rescue mission organized by two Jewish groups is trying to get Holocaust survivors out of the war wrought by Russia’s invasion of Ukraine. (Lena Mucha/The New York Times)

HANNOVER, Germany — Their earliest memories are of fleeing bombs or hearing whispers about massacres of other Jews, including their relatives. Sheltered by the Soviet Union, they survived.

Now elderly and fragile, Ukraine’s Holocaust survivors are escaping war once more, on a remarkable journey that turns the world they knew on its head: They are seeking safety in Germany.

For Galina Ploschenko, 90, it was not a decision made without trepidation.

“They told me Germany was my best option. I told them, ‘I hope you’re right,’ ” she said.

Ploschenko is the beneficiary of a rescue mission organized by Jewish groups, trying to get Holocaust survivors out of the war wrought by Russia’s invasion of Ukraine.

Bringing these nonagenarians out of a war zone by ambulance is dangerous work, infused with a historical irony: Not only are the Holocaust survivors being brought to Germany, the attack is now coming from Russia — a country they saw as their liberators from the Nazis.

A week ago, Ploschenko was trapped in her bed at a retirement center in Dnipro, her hometown in central Ukraine, as artillery strikes thundered and air raid sirens blared. The nurses and retirees who could walk had fled to the basement. She was forced to lie in her third-floor room, alone with a deaf woman and a mute man, bedridden like her.

“That first time, I was a child, with my mother as my protector. Now, I’ve felt so alone. It is a terrible experience, a painful one,” she said, comfortably ensconced after a three-day journey at a senior care center in Hannover, in northwestern Germany.

To date, 78 of Ukraine’s frailest Holocaust survivors, of whom there are about 10,000, have been evacuated. A single evacuation takes up to 50 people, coordinating across three continents and five countries.

For the two groups coordinating the rescues — the Jewish Claims Conference and the American Joint Distribution Committee — just persuading survivors such as Ploschenko to leave is not an easy sell. 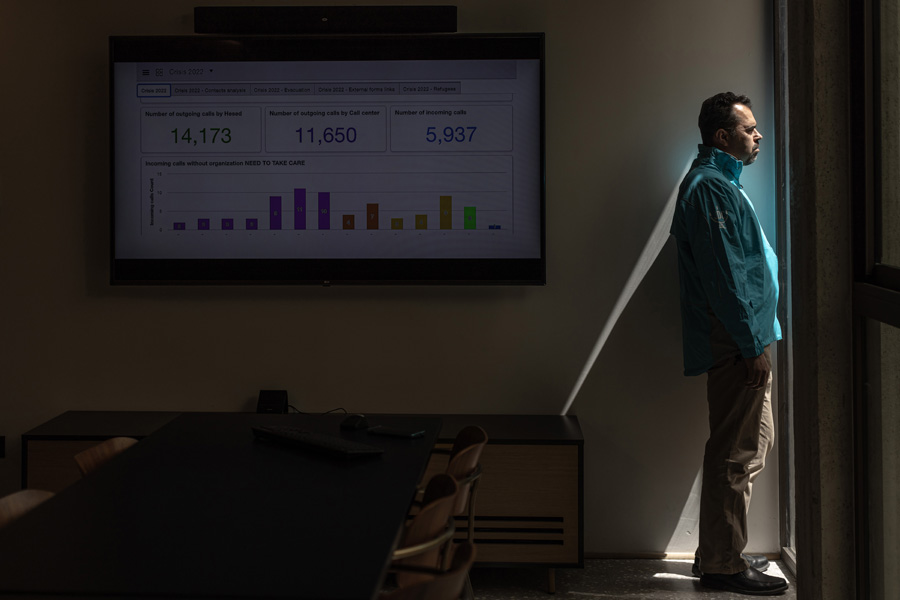 Pini Miretski, the medical evacuation team leader at the American Joint Distribution Committee, one of the two groups coordinating the rescue of Holocaust survivors from Ukraine, in Jerusalem, April 27, 2022. The JDC and the Jewish Claims Conference are trying to get Holocaust survivors out of the war wrought by Russia’s invasion of Ukraine. (Avishag Shaar-Yashuv/The New York Times)

Most of the frailest and oldest survivors contacted have refused to leave home. Those willing to go had myriad questions: What about their medications? Were there Russian or Ukrainian speakers there? Could they bring their cat? (Yes, as it turned out.)

Then there was the most awkward question of all: Why Germany?

“One of them told us: 'I won’t be evacuated to Germany. I do want to be evacuated — but not to Germany,' ” said Rüdiger Mahlo, of the Claims Conference, who works with German officials in Berlin to organize the rescues.

Founded to negotiate Holocaust restitutions with the German government, the Claims Conference maintains a detailed list of survivors that, under normal circumstances, is used to distribute pensions and health care but that now serves as a way to identify people for evacuation.

Ploschenko believes that she, her mother and five of her aunts survived by singing — whether working the cotton fields in Kazakhstan, where they found temporary refuge, or huddling beneath umbrellas in a roofless apartment after the war.

“We would sing along with the radio,” she recalls with a smile. “It’s what saved us. We sang everything, whatever there was on — opera, folk songs. I really want to sing, but I don’t know that I can anymore. I don’t have the voice for it. So instead, I just remember all the times I sang before.”

Perched amid pillows in a sunlit room at the AWO senior center, Ploschenko directs the music in her mind with a trembling hand. As caretakers bustle in and out, she practices the German phrases she has carefully recorded on a notepad: “Danke Schön,” many thanks. “Alles Liebe,” much love.

At least two Holocaust survivors have died since the war began in Ukraine. Last week, Vanda Obiedkova, 91, died in a cellar in besieged Mariupol. In 1941, she had survived by hiding in a cellar from Nazis who rounded up and executed 10,000 Jews in that town.

For Vladimir Peskov, 87, evacuated from Zaporizhzhia last week and living down the hall from Ploschenko at the home in Hannover, the circular feeling this war has given his life is demoralizing.

“I feel a kind of hopelessness, because it does feel like history repeats itself,” he said, hunched in a wheelchair, stroking a mug that belonged to his mother — one of the few keepsakes he brought to Germany.

Yet, he also has found a measure of closure, too.

“Today’s war has ended any negative emotions I felt toward Germany,” he said.

Just outside his room, a group of survivors who recently arrived from the eastern city of Kramatorsk sat around a table in the home’s sunny kitchen. They loudly lamented the idea of fleeing war again. But they declined to share their thoughts with a Western newspaper reporter.

“You will not tell the truth,” one man said, looking away.

Their hesitancy reflects one of the most painful parts of this second exile, particularly for those from Ukraine’s Russian-speaking eastern regions: Reconsidering one’s view of Germany is one thing, acknowledging Russia as an aggressor is another.

“My childhood dreams were to buy a bike and a piano, and to travel to Moscow to see Stalin,” Ploschenko said. “Moscow was the capital of my homeland. I used to love the song ‘My Moscow, My Country.’ It is hard for me to believe that country is now my enemy.”

Flipping through a photo book, she pointed to pictures of her younger self, posing in a bathing suit on the beach in Sochi, the waves crashing around her.

“Sometimes I wake up and forget I’m in Germany,” she said. “I wake up, and I’m back on a business trip in Moldova, or Uzbekistan. I’m back in the Soviet Union.”

But Germany will be her home for the rest of her days. It is an idea she has now made her peace with, she said. “I have nowhere else to go.”

Tweets by @forbesindia
Take a #RentalHealthDay with Uber Rentals
NFT sector to process more than $800 billion in next 2 years: report