Despite the quick and collective effort to gather evidence in Ukraine, experts say that the formation of war crimes trials and convictions, if they ever occur, could most likely take years 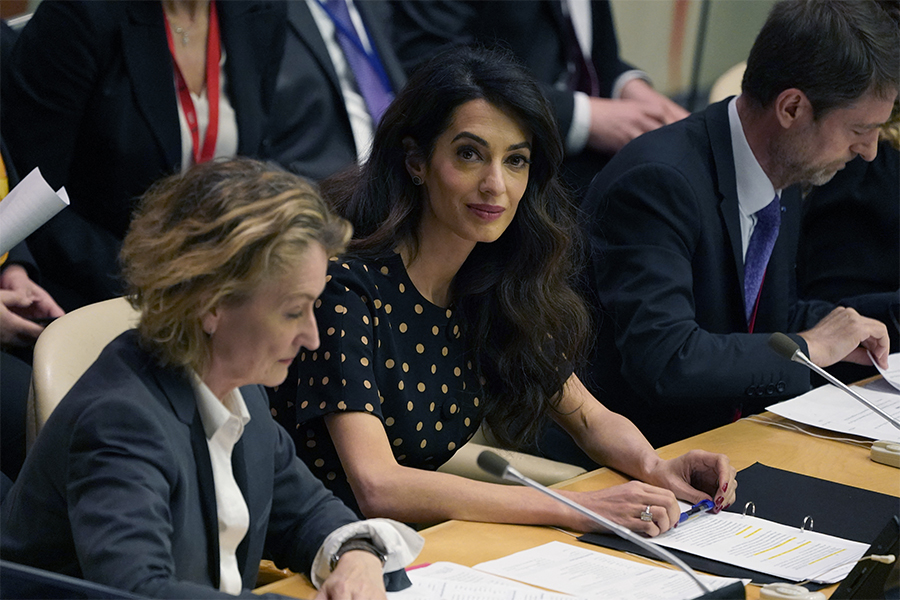 Amal Clooney of the Clooney Foundation for Justice attends the United Nations 'Arria-formula' meeting, an informal gathering of Security Council members, on April 27, 2022, in New york to discuss how the UN can support and coordinate accountability efforts for serious crimes in Ukraine. Image: Timothy A. Clary / AFP

The U.N. Security Council on Wednesday held an informal meeting on the efforts underway in Ukraine to document reports of war crimes and crimes against humanity committed by Russian forces. The evidence gathering is a crucial first step toward prosecution delivering accountability and justice, diplomats said.

A prominent cast of experts on human rights and war crimes — including the prosecutor for the International Criminal Court, lawyer Amal Clooney, the U.N.’s top human rights chief and the head of Human Rights Watch — attended the meeting organized by Albania and France at the United Nations. Ukraine’s prosecutor general joined via a video screen from Kyiv, the Ukrainian capital.

Karim Khan, the ICC’s chief prosecutor, said the conflict in Ukraine was a singular moment for justice and accountability. Khan said that 43 countries had referred the situation in Ukraine to the ICC — the largest number ever — and that the court had joined for the first time an effort by Ukraine, Poland and Lithuania to conduct joint investigations.

Khan said the court was independent and impartial and called on Russia to cooperate with it. But he said his many attempts to communicate with Russia have gone unanswered.

Despite the quick and collective effort to gather evidence in Ukraine, experts say that the formation of war crimes trials and convictions, if they ever occur, could most likely take years. Russia will most probably not make available witnesses or extradite anyone, much less arrest them, experts say.

Clooney, who is part of a legal team advising Ukraine on accountability, chided the council and the U.N. for failing to do the job it was created to do — preventing conflict and crimes against humanity — and for not holding accountable previous perpetrators of war crimes in places such as Darfur, Syria and Myanmar.

“Ukraine is, today, a slaughterhouse — right in the heart of Europe,” Clooney said. “How did we get here? We got here by ignoring justice for so long.”

Russia, as it has done at every council meeting, denied its military forces had killed or tortured civilians and called such claims fake and lies. It said it planned to have its own informal council meeting on May 6 — the second such meeting that Russia will have organized — to counter the allegations with independent experts.

Sergey Leonidchenko, a Russian diplomat, said the ICC was a “political instrument” that was “assigning blame before a formal investigation was complete.”

Russia also called the United States and Britain, co-sponsors of the meeting, “hypocrites” because they had either not signed on to the ICC or had taken measures to protect their own military troops in Iraq and Afghanistan from being prosecuted by the court.

Ukrainian prosecutor general Iryna Venediktova said that the crimes Russia had committed in Ukraine were “colossal in nature and scale,” and that there was reasonable basis for the crime of genocide.

Venediktova said 14 jurisdictions outside Ukraine were also investigating the war under a legal principle known as universal jurisdiction, which allows countries to prosecute crimes that were not committed in their territory and that amount to crimes against humanity.

As of April 14, her office has accused Russia of 6,400 crimes of aggression and war crimes since the invasion began.