World War II still looms large in Germans' living memory and public discourse, shaping the perception of the Ukraine invasion and the political debate over how to face the moment 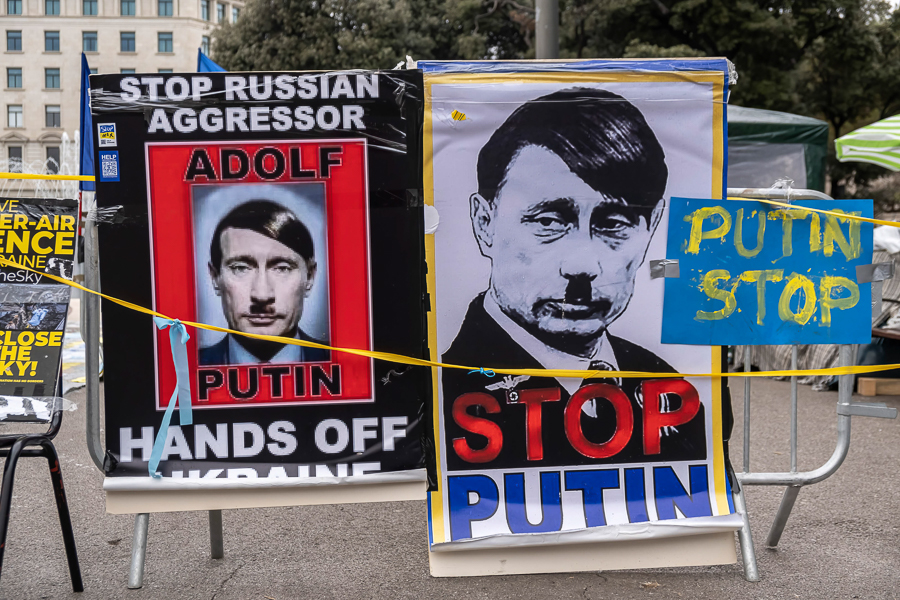 Posters depicting Russian President Vladimir Putin as Adolf Hitler are seen in Plaza Catalunya. There has been widespread opposition to Russia's invasion of Ukraine, with protests taking place in many European cities. Image: Paco Freire/SOPA Images/LightRocket via Getty Images

Berlin, Germany: The war weighs heavy on Ilse Thiele's mind these days as she sits in the floral print armchair in her Berlin living room, the television constantly tuned to the news from Ukraine.

"Of course, all the memories come flooding back," the 85-year-old retired manager of an East German post office says, as she watches the streams of exhausted refugees meeting armies of volunteers just minutes away at Berlin's main train station.

"I feel so sorry for all those people, especially the children."

Thiele recalls the biting cold and ache of hunger on her own trek from Lower Silesia in today's Poland in the winter of 1944-45, when she and her mother fled the Russian advance on foot for Thuringia in central Germany.

World War II still looms large in Germans' living memory and public discourse, shaping the perception of the Ukraine invasion and the political debate over how to face the moment.

Germans, proud of their robust democracy, have reacted with outrage at Vladimir Putin's attempts to frame the war as a struggle against "neo-Nazi" aggressors plotting "genocide" on Russia's doorstep.

The Russian president argued in a speech last month that Ukrainian forces aimed "to kill innocent people, just as members of the punitive units of Ukrainian nationalists and Hitler's accomplices did during the Great Patriotic War".

The German mission in South Africa quickly stepped in, saying it couldn't remain "silent" in the face of such a "cynical" statement while Russia was "slaughtering innocent children, women and men for its own gain".

"It's definitely not 'fighting Nazism'. Shame on anyone who's falling for this. (Sadly we're kinda experts on Nazism.)," the mission added in a tweet that drew 160,000 "likes".

Hedwig Richter, modern history professor at the Bundeswehr University in Munich, told AFP that Putin was perverting the "overwhelming international consensus" that the Nazis were the "epitome of evil" to make his case.

"It is absolutely absurd, particularly given the Jewish president of Ukraine" Volodymyr Zelensky, she said, noting that many Holocaust survivors associated Ukrainian town names now in the news with atrocities committed by the Germans.

"As a German, I am deeply offended that Putin would abuse the memory of the Germans' crimes in the Nazi period to legitimise his rule," she told AFP.

"What we're observing is how important historical remembrance is, particularly when you see how Russia, by forgetting its Stalinist crimes, is feeding an aggressive nationalism."

She said Germany had been forced to learn that the lesson of its own dark history was "not only a yearning for peace but also, in a crisis, active military defence of human rights".

Anti-war protests across Europe and throughout Germany have deployed a caricature of Putin with a toothbrush moustache in a reference to the Nazi dictator.

Historian Heinrich August Winkler stressed, in a recent essay, the singularity of Hitler's brutal military campaigns and the slaughter of six million Jews in the Holocaust—a point of consensus in mainstream German thought.

Nevertheless, he argued in the weekly Die Zeit in an article titled "What Links Putin with Hitler" that the Russian leader's obsession with a perceived "stab in the back" by the West and ultranationalist rhetoric were important parallels worthy of examination.

"Putin is now confronting Western democracies with the question of how seriously they take their much-espoused values," Winkler said, much like the initially reluctant Allies of World War II.

Historian Gundula Bavendamm told AFP Germans had a visceral response to the invasion of Ukraine due to atrocities against civilians committed by the Nazis, and because every living generation had seen waves of refugees—after World War II, from Yugoslavia in the 1990s and most recently from Syria.

But she said she found the incessant references to Hitler problematic, not least because they obscured recent historical failings by Germany, including energy reliance on Russia, meagre military spending and "our closeness to Putin -- seeing too late what kind of man this is".

"Constantly invoking our responsibility for World War II may have kept us from important self-criticism in the last 10-15 years," said Bavendamm, who runs Berlin's Displacement, Expulsion, Reconciliation museum.

For Thiele, the Berlin pensioner, the failure to learn from the past rips open old wounds.

"My parents lived through two world wars and I lived through one thanks to that nasty pig Hitler," she said, recalling that her late husband's communist family had been prisoners at the Nazi concentration camp Sachsenhausen.

"Do they want to start a third world war? I just can't understand how, if you know anything about war, you could start one again."