Russian forces took control of this port city on the Sea of Azov in the first days of the military campaign they launched in Ukraine in late February, facing almost no resistance 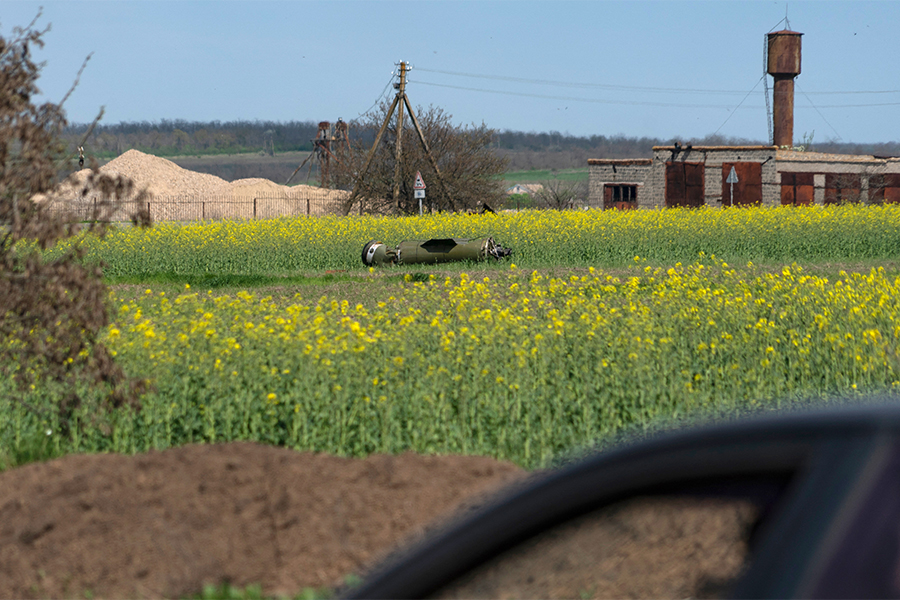 A photograph taken on April 30, 2022 shows the remain of a missile in the field on the outskirts of Berdyansk.​ (Credit: Andrey BORODULIN / AFP)

Berdyansk, Ukraine: A Russian military plane was flying in the skies over Berdyansk, a city in southern Ukraine, but no one took much notice.
"Nothing to worry about," said an older woman sitting on a bench in a small square on a sunny weekend afternoon. "It's one of ours."
Russian forces took control of this port city on the Sea of Azov in the first days of the military campaign they launched in Ukraine in late February, facing almost no resistance.
In the weeks since, it has been cut off from other parts of the country, as Moscow's troops and pro-Russian separatists battle to seize swathes of eastern and southern Ukraine.
AFP journalists were able to travel to Berdyansk, as well as the city of Melitopol about 100 kilometres (60 miles) to the west, as part of a press tour organised by the Russian army.
Controlling the two cities is of vital strategic importance to Russia because, along with Mariupol to the east, they would form part of a land corridor linking Russian territory to Crimea, the Black Sea peninsula Moscow annexed from Ukraine in 2014.

In both cities, Moscow has installed local administrations in charge of bringing back a semblance of normal life and—they openly admit—aying the groundwork for a future with Russia.
"We are in a transition phase, from Ukraine to Russia," the head of the new administration in Berdyansk, Alexander Saulenko, told journalists in the city.
"We see our future with Russia."
Some steps are already being taken, with plans in the works to start paying public sector salaries and pensions in Russian rubles instead of Ukrainian hryvnia.
Short of funds to keep the city running, Saulenko said "we will turn to Russia for help".

In Melitopol, a Communist banner was flying over the central Victory Square and Soviet-era patriotic songs blared out from the loudspeakers of a military truck.
Elsewhere in the city, it was the Russian tricolour flag on display.
AFP saw no traces of fighting or destruction in the two cities, a sharp contrast to the apocalyptic landscape of Mariupol only 70 kilometres (40 miles) east of Berdyansk.
"All the (Ukrainian) troops left the city" before the arrival of Russian forces, said Svetlana Klimova, a 38-year-old former petrol station worker in Berdyansk.
"If they had stayed, it would have been like Mariupol."
Several residents in the city expressed their relief at having escaped Mariupol's fate, and some were enthusiastic about the Russian presence.
"When I heard (about the Russians' arrival), I was so happy I had tears in my eyes," said Valery Berdnik, a 72-year-old ex-dockworker with a big grey moustache.
He said other cities in Ukraine, like the southern regional capital Zaporizhzhia or Kharkiv in the northeast, "should become Russian".
With Russian soldiers patrolling the streets and sometimes listening in on interviews, it was hard to imagine anyone expressing much opposition to Moscow's presence.
But there were signs that not everyone in Berdyansk shares Berdnik's enthusiasm, with Saulenko admitting that the city's population has fallen to between 60,000 and 70,000, from more than 100,000 a few months ago.
In Melitopol, "the city is divided", said Elena, a 38-year-old schoolteacher walking the streets in a pair of big sunglasses, a cross-shaped earring in one ear.
"There are some who are happy, and some who criticise the situation," she said.
Melitopol's mayor Ivan Fedorov was famously detained and held for several days by Russian forces in March, and eventually left the city.
Several demonstrations took place early on against the Russian presence, but they have now stopped, another Melitopol resident said.

Mariupol looms large in everyone's minds here. Olga Chernenko, 50, is one of several thousand residents who fled the city for Berdyansk.
Chernenko escaped at the end of March and now lives in a former Communist youth centre, where the television in the common room is tuned to a Russian 24-hour news channel.
She hopes to "go home by the autumn" if Russian forces manage to take total control of Mariupol, and thinks Berdyansk did the right thing by "surrendering without a fight".
"If we want to preserve lives, we cannot fight in the cities," she said.
Berdyansk and Melitopol may appear calm, but the queues in front of banks and currency exchange offices were reminders that the situation is far from normal.
"There is no cash, the bank machines don't work," said Klimova, who hopes "Russia will help by paying benefits and pensions".
Authorities in the two cities are keen to bring residents on side by returning as much normal life as possible.
In Melitopol, journalists were brought to the inauguration of a skating rink, where a few people skated briefly, then disappeared when the cameras were turned off.
In Berdyansk, it was the local marriage office, where weddings were again being celebrated, the first in a month.
Suddenly two loud bangs erupted: fireworks exploded, throwing confetti into the air. No one blinked an eye.
By Gokan GUNES
© Agence France-Presse