'Mariupol is gone', people who escaped describe flight from ruins

Mariupol, a port in Ukraine's south on the Sea of Azov, is a largely Russian-speaking city. Some of the evacuees said they had once been ambivalent about some of the more enthusiastic displays of Ukrainian national pride that have become common throughout the country since 2014, when Russia snatched away the Crimean Peninsula and instigated a separatist war in the east 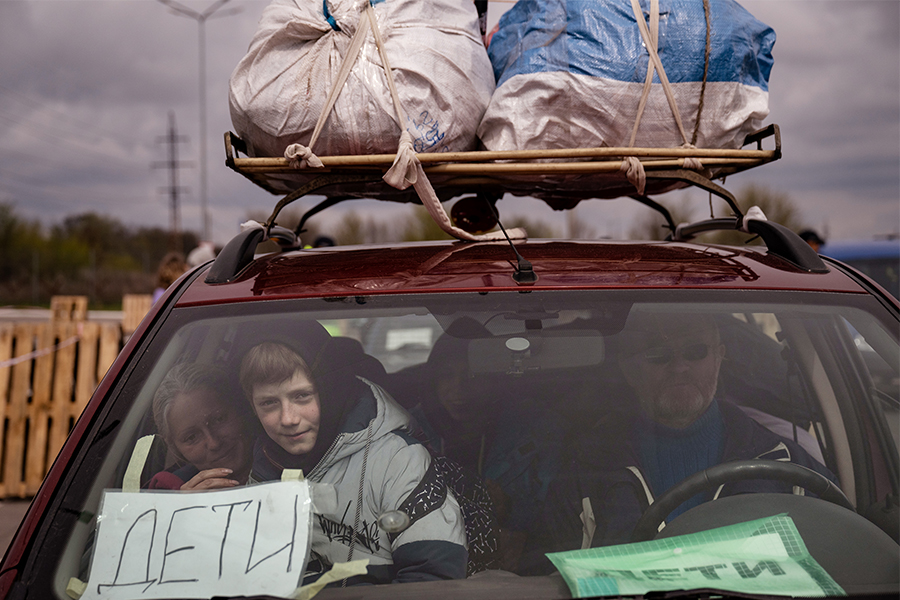 A Ukrainian family arrives in Zaporizhzhia after fleeting Russian-occupied Mariupol in Eastern Ukraine, April 21, 2022. Those arriving here from Mariupol today described cold, hunger and weeks living in basements, with days broken up only by quick dashes to the surface to cook paltry meals on open fires in the courtyard, amid neverending shelling. (Lynsey Addario/The New York Times)

Most of the people from Natalia Popko’s neighborhood in Mariupol supported the Russians when Vladimir Putin ordered his forces to invade Ukraine on Feb 24. Even when the bombs started falling and they had to start sleeping in their basements, they blamed their travails on the “Nazis” from Kyiv, she said.

“Then they ran out of food, and there was no more water or gas or electricity,” said Popko, 37. This changed their minds about the benefits of Russian rule over Mariupol, she said. She said she was one of the few in her neighborhood who supported the Ukrainians.

Wearing a green velour jumpsuit and black combat boots, Popko spoke Thursday in the parking lot of a large home goods store in the central Ukrainian city of Zaporizhzhia, having just stepped off a yellow bus that had transported her and dozens of evacuees from Mariupol the night before. It was a harrowing all-night drive through Russian-controlled territory with countless checkpoints manned by jumpy Russian soldiers who could have quickly put an end to their flight.

Popko traveled with her husband, mother and 10-year-old son, Matvei, along with a grumpy 16-year-old cat named Marta. She and other evacuees described how their once vibrant seaside city had been turned into an apocalyptic hellscape after the Russian invasion, forcing them to spend weeks in basements and to risk their lives amid the constant barrage of rockets and artillery. Days were broken up only by quick dashes to the surface to cook paltry meals on open fires in the courtyard, amid never-ending shelling.

“The city is gone, the city is destroyed,” said one of the evacuees, who gave her name as Sasha. Like others, she was reluctant to provide her full name.

“There are only a few homes that haven’t burned down or been bombed,” she said. “There are a few schools.”

She said she, her mother, young son and their dog, Chara, would have left earlier but their neighborhood had been cut off after some of the bridges had been bombed and others were mined. For a while they thought about leaving on foot, she said.

“Everything you’re going to write,” she said to a reporter, “will constitute a fifth of the reality.”

Mariupol, a port in Ukraine’s south on the Sea of Azov, is a largely Russian-speaking city. Some of the evacuees said they had once been ambivalent about some of the more enthusiastic displays of Ukrainian national pride that have become common throughout the country since 2014, when Russia snatched away the Crimean Peninsula and instigated a separatist war in the east.

But the war has changed their minds.

“I was getting tired of all the Ukrainian flags and the vyshyvanka,” a 32-year-old evacuee named Alexander said, referring to the traditional Ukrainian embroidered shirts. “But after all of this with Russia, seeing my own native flag flying, it’s like I’ve returned home.”