The South Korean president asked Kim to resume dialogue with the United States to try to end the cycle of tensions caused by North Korea's nuclear weapons development and missile launches, which have led to international sanctions 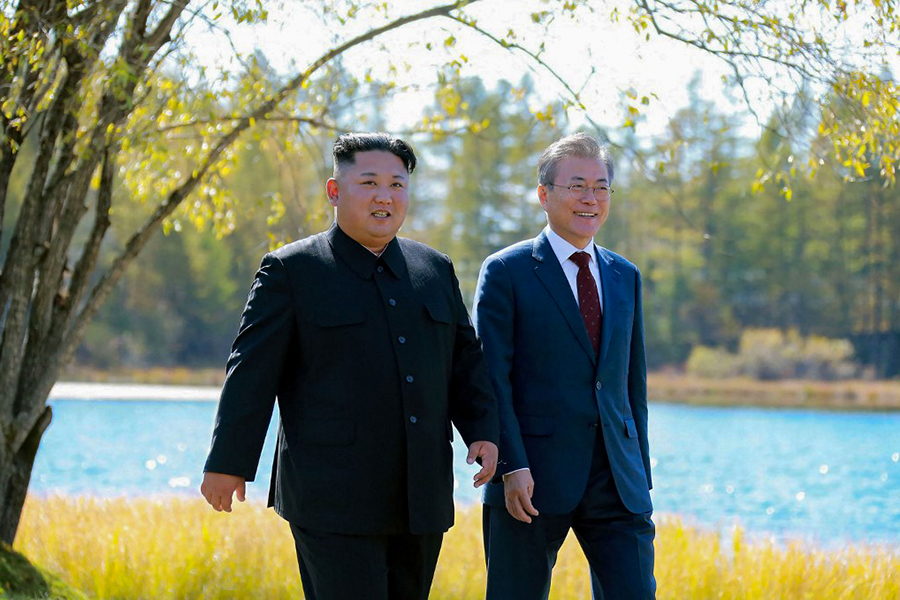 Moon, 69, who is barred by law from seeking reelection, will step down on May 10 after a single five-year term. In his letter sent Wednesday, he urged Kim to use “dialogue to overcome the era of confrontation” on the divided Korean Peninsula, according to Moon’s spokeswoman, Park Kyung-mee.

The South Korean president asked Kim to resume dialogue with the United States to try to end the cycle of tensions caused by North Korea’s nuclear weapons development and missile launches, which have led to international sanctions.

“​There were moments of regret and memories of overwhelming emotions,” Moon wrote in the letter of his relationship with Kim. “But I believe that holding our hands together, we have taken a sure step toward changing the fate of the Korean Peninsula.”

Moon said that he would soon return to “life as an ordinary citizen​,” but that his heart will be dedicated to efforts​ to build peace between the two Koreas.

Kim, 38, who will most likely rule North Korea until his death barring a coup or other forced removal, and whose government has harshly criticized the South Korean government, had some warm parting words for Moon, nevertheless.

“Kim Jong Un appreciated the pains and effort taken by Moon Jae-in for the great cause of the nation until the last days of his term of office,” the North’s official Korean Central News Agency reported on Friday, referring to the letter Kim sent in response. “The exchange of the personal letters between the top leaders of the North and the South is an expression of their deep trust.”

The Koreas are still technically at war since the fighting between the two sides ended in 1953 not with a formal peace treaty but in a truce. When Moon took office in 2017, the Korean Peninsula looked as if it were edging toward a renewed war. North Korea tested a hydrogen bomb and launched intercontinental ballistic missiles. President Donald J. Trump threatened to rain “fire and fury”​ ​ on the North. The two leaders exchanged personal insults like “little Rocket Man” and “U.S. dotard.”

But Moon and Kim introduced a rare détente when they met three times in 2018, hugging each other and vowing to build peace and reconciliation on the peninsula. Moon regularly called for dialogue and improving inter-Korean relations. He saw his political stock rise when he mediated the unprecedented made-for-TV summit between Kim and Trump in Singapore in 2018.

The leaders signed a document in which Trump promised “security guarantees” for North Korea and Kim committed to “work toward complete denuclearization of the Korean Peninsula.”

Moon had his own moments of glory, as well: He stood in the May Day Stadium in Pyongyang in 2018, becoming the first South Korean leader to address a North Korean audience. He and Kim raised their locked hands atop Mount Paektu, which Koreans consider their nation’s sacred birthplace.

But the euphoria didn’t last long.

The devil has always been in the details when it comes to negotiating how to implement any deal with North Korea. Moon’s painstaking work to mediate between Kim and Trump started fraying after their second summit, held in Hanoi in 2019, collapsed without the leaders sorting out the details on how to carry out the Singapore agreement.

Trump left office without the removal of any North Korean nuclear warheads. Moon later said that Trump “beat around the bush and failed to pull it through.”

Since then, Kim has resumed a barrage of weapons tests, including one involving an intercontinental ballistic missile last month. His government has vented its frustration at South Korea, calling Moon’s government “officious,” an “idiot” and a “feared mongrel dog.” The North even blew up a joint inter-Korean liaison office that Moon had considered one of his key legacies.

In South Korea’s polarized society, Moon’s critics called him a naïve pacifist who bet too much on Kim’s unproven commitment to denuclearization. But Moon had die-hard supporters for his approach. His approval ratings hovered around 44% this month, an usually high record for a departing South Korean leader, according to surveys.

Even so, Moon’s trademark policy of ​seeking dialogue and exchanges with North Korea is in jeopardy after the candidate of his liberal Democratic Party lost the March 9 election by a razor-thin margin to Yoon Suk-yeol, who championed a more hawkish stance on North Korea during the campaign.

In his letter, Kim appeared to send a vaguely worded message to Yoon, the incoming president of South Korea. Kim said that “inter-Korean relations would improve and develop as desired and anticipated by the nation if the north and the south make tireless efforts with hope,” the North Korean news agency said.

Yoon’s office did not immediately comment publicly on Kim’s remarks.

During the campaign, Yoon said he was open to dialogue with North Korea. But like past conservative South Korean leaders, he also emphasized the importance of enforcing sanctions against the North as a tool to pressure North Korea to return to the negotiating table.

Tweets by @forbesindia
'Mariupol is gone', people who escaped describe flight from ruins
How ByteDance has its sights set on the music industry