After signing up a rush of volunteers at the start of the war, the International Legion recently has become much more selective in recruiting members, taking only those with combat experience who pass rigorous vetting 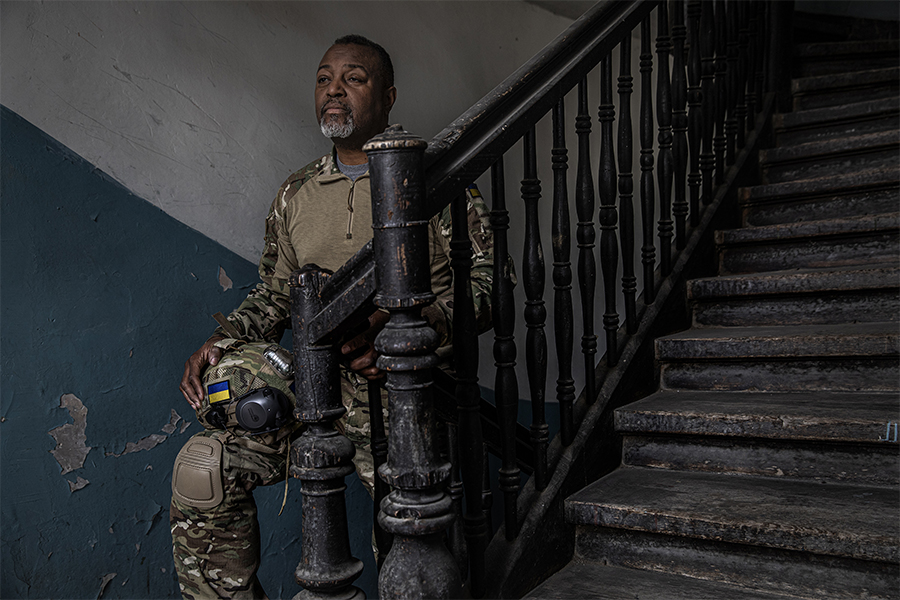 Malcolm Nance, a U.S. Navy veteran serving in Ukraine’s International Legion, in Lviv, Ukraine, April 19, 2022. The deaths of three foreigners killed this week while fighting with Ukrainian forces has drawn renewed attention to thousands of largely unregulated volunteers who have gone to fight Russia’s invasion, some of them accepted into an international legion. (Finbarr O'Reilly/The New York Times)

The deaths of three foreigners killed last week while fighting with Ukrainian forces has drawn renewed attention to thousands of largely unregulated volunteers who have gone to fight Russia’s invasion, some of them accepted into an international legion.

Among the dead was Willy Joseph Cancel Jr., 22, a correctional officer and a Marine Corps veteran who left Kentucky to fight with the Ukrainian army, his uncle said.

Cancel’s father was told that the former Marine had been killed when his Ukrainian unit was overrun by Russian troops last week, the uncle, Christopher Cancel, said. His body had not yet been recovered.

A Ukrainian Defense Ministry official confirmed Friday that an American, a Briton and a Dane had been killed fighting with the Ukrainian army’s International Legion. The official asked not to be identified because he was not authorized to speak publicly about the deaths.

“The armed forces pay tribute to the sacrifice of the foreign heroes who have come to protect the Ukrainian people from this barbarous invasion but also to defend freedom and democracy everywhere,” the legion said in a statement.

Malcolm Nance, a Navy intelligence veteran and former TV commentator who is now the public face of the legion, called the volunteers who died “protecting angels, along with all those people who lost their lives in this senseless Russian invasion.”

In an interview before the foreign fighters were killed, Nance said many would-be volunteers arriving in the country underestimated the danger from Russian forces. He said the war was unlike what American veterans may have experienced in the U.S. invasion and occupation of Iraq.

“You’re the hunted now,” he said. “And it is a full combined-arms army with an enormous artillery machine that is there to chew you up.”

Ukraine and Russia have each had steep military losses, though their governments have not given specific figures. In mid-April, U.S. intelligence agencies estimated that 5,500 to 11,000 Ukrainian troops had been killed and more than 18,000 wounded. Western intelligence agencies estimate that Russian military losses range from 7,000 to 10,000 killed and 20,000 to 30,000 wounded.

The United Nations says at least 2,300 civilians have also been killed, acknowledging the actual number is likely much higher.

After signing up a rush of volunteers at the start of the war, the International Legion recently has become much more selective in recruiting members, taking only those with combat experience who pass rigorous vetting, according to the legion’s spokesman, Damien Magrou, a Norwegian lawyer.

Magrou said the legion rejects a majority of applicants, but some of those who are turned down make their way to the front lines anyway, hoping to find another group to fight with.

“We tell them there is a shuttle bus back to Poland; the best thing you can do is get a seat on it,” he said.

President Volodymyr Zelenskyy of Ukraine announced the formation of the legion Feb. 27, three days after the invasion began, and invited foreign volunteers to come and fight. Ten days later the Ukrainian government said it had received 20,000 applications.

The government has declined to say how many foreign volunteers there are in the country, but there are believed to be several thousand, most of them fighting with groups other than the International Legion.

It was not clear when Cancel joined the legion. According to the Marine Corps, he left the U.S. military in November after receiving a bad conduct discharge and serving time in a military jail for an undisclosed criminal offense.

Fighters accepted by the International League sign a contract to fight with the Ukrainian army and are paid the same rate as Ukrainian soldiers.

In Lviv, in western Ukraine, train and bus stations have become hubs not only for Ukrainians but also for Americans and other foreigners arriving to join the fight or help with aid efforts.

Dominick Henry, a businessman from New York City who was recently in Ukraine helping with logistics for volunteers, said he tried to channel most of the new arrivals into humanitarian operations.

“Usually when Americans go fight they’ve got air support; they’ve got everything,” he said. “This time it’s the opposite.”

He said many of those who came to Ukraine to fight the Russians were disappointed when they were rejected by combat forces.

“They come for glory and honor,” Henry said. “They think it will give them a leg up in life. It’s a heavy price to pay.”