Slovakia, which like Hungary is almost 100 percent dependent for fuel on Russian crude coming through the Druzbha pipeline, has said it will need several years to phase out 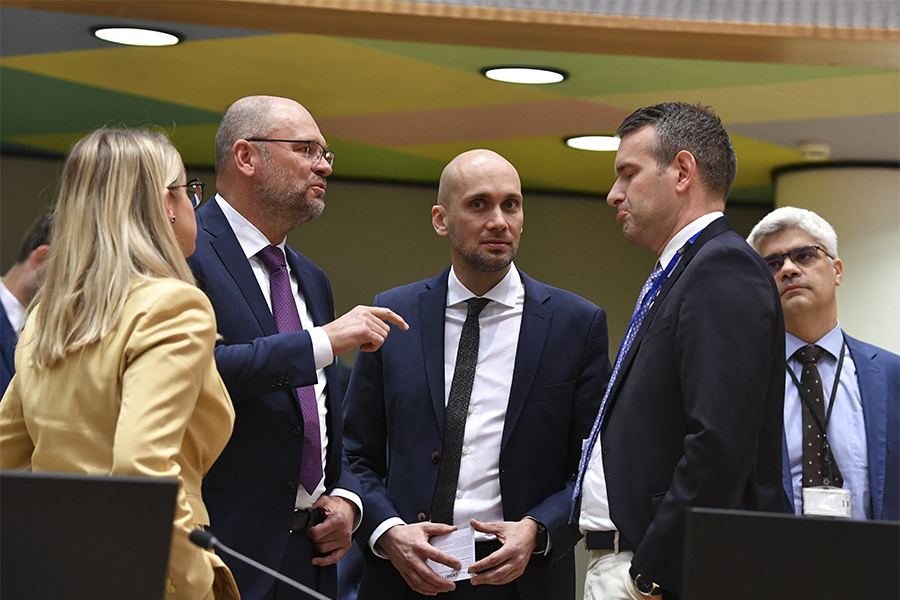 Slovakia Minister of Economy Richard Sulik (L) talks with Hungary State Secretary for Development of Circular Economy and for Energy and Climate Policy, the ministry of Innovation and Technology Attila Steiner (R) during the Special European Energy Ministers Council on Russian gas and petrol crisis at the EU headquarters in Brussels on May 2, 2022.​ (Credit: JOHN THYS / AFP)

Brussels, Belgium: EU officials late Tuesday handed over a draft plan to member states on a new package of sanctions to punish Russia for its invasion of Ukraine, but some members are jockeying to opt out of an oil embargo.
Several EU officials and European diplomats in Brussels told AFP there were divisions over the plan.
It was only adopted late at night due to the stance of one of the member states.
Ambassadors from the 27 European Union countries will meet on Wednesday to give the plan a once-over, and it will need unanimous approval before going into effect.
The commission's proposal would phase in a ban on oil imports from Russia over six to eight months, with Hungary and Slovakia allowed to take a few months longer, EU officials told AFP.

But Slovakia, which like Hungary is almost 100 percent dependent for fuel on Russian crude coming through the Druzbha pipeline, has said it will need several years.
Slovakia's refinery is designed to work with Russian oil and would need to be thoroughly overhauled or replaced to deal with imports from elsewhere—an expensive and lengthy process.
Other officials, speaking on condition of anonymity during the legally and diplomatically fraught negotiation, said Bulgaria and the Czech Republic could also seek sanctions opt-outs.
One European diplomat warned that granting exemptions to one or two highly-dependent states could trigger a domino effect of exemption demands that would undermine the embargo.
The European Commission is not planning to unveil the draft in public before its president, Ursula von der Leyen, addresses the European Parliament on Wednesday.
© Agence France-Presse

Tweets by @forbesindia
Howard Schultz vows new investments as Starbucks aims to head off union push
Can you buy creativity in the gig economy?